When the County Council suggested putting cycle lanes in Milton High Street recently, Milton parish Council responded by saying they didn’t want cycle lanes but wanted cyclists to cycle on the pavement instead. Are they car drivers who want to get cyclists out of their way? Or do they genuinely believe that cyclists are better off on the pavement?

If the proposal were for a proper cycle track, then we might have some sympathy with this view. Not that there is likely to be the money for the kind of quality that would be desirable, and if there were, it would surely be better spent on an A14 bridge at Milton. But we are all far too familiar with the inadequate blue-signs-and-nothing-else approach taken in Cambridge City in the past. It looks as though Milton has not learned by Cambridge’s experience.

Cambridge Cycling Campaign proposes to object to any proposals which only sign the pavement as dual use. It is not sufficient to say ‘people can ignore it if they want,’ for two main reasons. 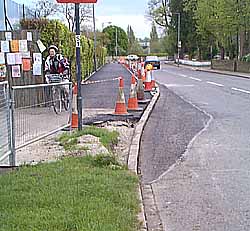 Work had just started on the construction of the cycle track on Barton Road as we went to press last time. Now it is in full swing, and work there is expected to be completed in mid-June. Traffic signals at Lammas Land may be installed by the time you read this.

As I write, the road has been narrowed and space made for the cycle track for the approach to the new signals, and the tables carrying the track across Grange Road and other side roads are more or less complete. The main track has reached as far as Wolfson College, where it should widen out a little more than the part already constructed.

The last thing to be done will be the top surface, kerb and road markings, but even the temporary surface already constructed is smoother than the original path. If you use it once it is complete, we would like to hear your opinion.

Work on providing a cycle track past Fulbourn Hospital and over the hill into Fulbourn has reached the design stage, and construction seems likely this year. We are assured that the comments we made on the scheme have been passed on to the design consultants, W S Atkins, but it remains to be seen what they details they will come up with. We already know that the general principle is one of building the typical single widened path on one side of the road only.

In the meantime, there has been no progress we are aware of on the proposed link behind the Tesco store at Fulbourn. We are told that the County Council is still hopeful that this can go ahead, but the shop has been open for a year now. The sticking point is that part of the grounds of the hospital near the route is an unmarked cemetery, and this requires much negotiation.

We wrote to the County Council in April 1997 about the Robin Hood junction at the City end of Fulbourn Road. After a year with no response, despite several verbal reminders, I wrote again asking for a reply. I got a reply this time, but it was little more than ‘your comments were taken into account at the time’ – hard to believe, since nothing whatsoever changed after we saw the plans. The forward stop lines are hard to use because you can’t get to them, and for those using the Cherry Hinton Road cycle path, there’s nowhere to go at the end. It also suffers from a ‘drifting’ left turn lane of the type discussed in Left in the Lurch.

The roundabout on the A14 at Quy has been exercising our minds over the last couple of months. We reported last time that a new lane was to give traffic on the slip road from the A14 priority over traffic on the roundabout. It actually took nearly a month after that for the lane to be completely installed, and it is every bit as bad for cyclists as we had feared.

We have been out there on several mornings, taking video footage to show to the Council officers, and have had a site meeting with them. The County’s response is that it is too early to judge the scheme, while people are still getting used to it. Certainly drivers are starting to get used to it, and speeds are increasing as they are less hesitant. The number of cyclists using the roundabout seems to have fallen, and a few now use the pathetic new cycle lane, waiting for two streams of traffic at the exit from the roundabout. As we predicted, many ignore it and use the main traffic lanes instead.

Evidence of broken glass on the roundabout shows that there has already been at least one, possibly two collisions since the lane was painted. Fortunately we are not aware of any cyclist casualties so far, but it is a frightening experience to use the junction now. The majority of cyclists who use the alternative route through the tunnel under the A14 are faced with two right turns and a further main road crossing.

Some of you may remember that we objected to the planning application for a drive-through McDonald’s on Coldham’s Lane. We felt this would bring much more traffic to the area, and was designed with car-culture in mind.

Since then McDonald’s has taken the application to the Secretary of State because the City Council didn’t decide one way or the other in time. They also hedged their bets by submitting a second identical application (not including, we noted carefully, the cycle through facility to which the Evening News gave front page coverage) which the Council promptly turned down. The whole matter will go to a public inquiry in late June, following the backing of the full Council in opposing the development at its meeting in April.