Last time we reported that we had been consulted on proposals to put traffic lights and associated cycle lanes and so on, at the Mill Road / Gwydir Street junction. Since then, these plans have been approved, and the word is that work is expected to start there very shortly. The suggestions we made regarding a bit of extra red surfacing have also been adopted. 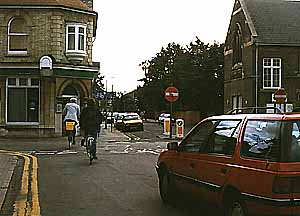 I think that these lights will make a huge difference to the many people who cross Mill Road at this point, both by cycle and on foot. It is a shame that this wasn’t done at the same time as the bike bridge and South East Cambridge cycle route were constructed many years ago now. However, doing it now will make the cycle route a more attractive option for people on the north side of Mill Road west of the railway bridge.

Work between Cherry Hinton and the new Roundabout on Newmarket Road east of the airport has now been completed and the contractors have departed – leaving a 10 m section of the cycle track in the middle unfinished!

However, apart from this missing link, what do we have? As you know from previous newsletters, there were two related plans, one associated with the new roundabout, and one near Cherry Hinton, effectively forming a continuous route along the west side of Airport Way, and some sections on the east side. We had reservations about the priority of this scheme compared with other possibilities in the area, but didn’t really get in early enough on a plan that has been in the works since before the Cycling Campaign was formed.

The quality of construction is high, and the path is really very smooth. Top marks for this – if only all were built to this standard. I will let you know if it starts to suffer from weed-hills or cracking like some others have. At the Cherry Hinton end, a new section of cycle track was built by cutting back a large hedge: there was doubt about whether this could be done. This joins a section of rebuilt pavement. It could be wider – for example, I had to pass someone in a wheelchair which was possible but tricky – and street lamps and road signs were not moved off the track, but given the likely level of use I don’t expect this would cause too many problems.

The track then runs smoothly around the west of the Cherry Hinton bypass roundabout and there is then a continuous section of unbroken smooth tarmac for about 1.5 km, probably the longest such stretch anywhere in the county. This goes all the way to the new Park and Ride site via the new roundabout on Newmarket Road, where it joins the existing shared-use footpath which is the subject of the new bus lane proposals (see ‘Newmarket Road takes to the buses’). 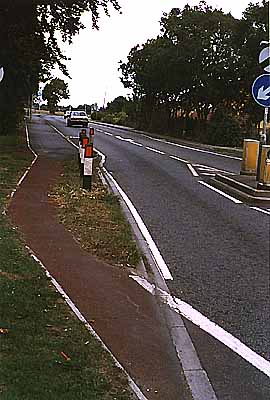 There are crossing points (protected by islands) at the new roundabout together with reconstructed cycle track along the north side of Newmarket Road, and also near Teversham church (protected by a road narrowing and island) to give access to Teversham. 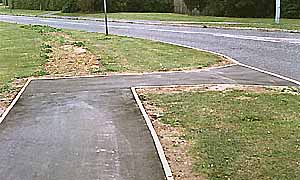 The eastern side at Cherry Hinton is less successful. Despite our asking them not to, the cycle track has been constructed with two unnecessary right angle bends. When will the engineers learn that you shouldn’t put right angle bends in cycle tracks? At the southern end also, instead of joining an existing slip lane onto the road for cycles as we requested, it dumps cyclists in a shop car park entrance.

So, the fewer than 100 cyclists a day who were recorded using Airport Way now have a cycle motorway. Maybe a few more will be prepared to use this route now there is a cycle track, but there doesn’t seem to be a large population to draw on for much suppressed demand. Perhaps leisure use might turn out to be the main draw. We’ll see.