The Department for Transport has awarded £550,000 for the construction of a fully Dutch-style roundabout at Fendon Road. The county council’s successful bid from the government’s £7 million 2018-19 Cycle City Ambition safety programme was announced in early June. With the remainder of the scheme’s estimated £800,000 costs already met from Section 106 developer contributions, the construction work is due to begin early in 2019.

The roundabout will be the first in Britain built according to a Dutch-based design giving priority to walking and cycling. It aims to improve safety for cyclists and pedestrians. The design includes slower and safer entering and exiting speeds for drivers, by using narrower carriageways with sharper turns. A central overrun ‘skirt’ allows longer vehicles to travel through the junction at low speeds, while its rough texture discourages misuse by drivers of smaller vehicles. On three of the four arms, there will be a ‘parallel zebra’ crossing (like the one on Huntingdon Road), where pedestrians on the traditional stripes and cyclists on distinct red bitmac all have priority over motor traffic entering or exiting the roundabout. Belisha beacons will show that both usages are within the protected crossings. Setting these crossings back gives visibility between users and space for motorists to give way at both the entrance and exit of the roundabout. 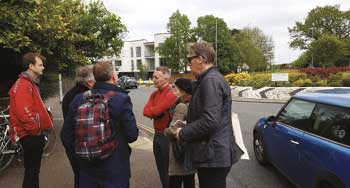 There is a previously-built ‘Dutch-inspired’ roundabout at Radegund Road. It has been criticised, however, because its only special feature was its compact design intended to reduce vehicle speeds. No priority crossing or segregated cycleway were provided, leading to confusion, with some cyclists using the road and others the poor quality shared-use pavements. Even so, it has been highly successful in reducing collisions in the area in the years since its construction, thanks to the lower speeds. It has also proved to British highway engineers that the radial approaches and compact circles of Dutch roundabouts can be built and used successfully in the UK without causing problems and while remaining fully navigable for large lorries. That step improvement has provided support for advancing the latest proposed roundabout, which adds protected, segregated cycleways and priority for people walking and cycling.

Camcycle has long campaigned for Dutch-style infrastructure in Cambridge (see, for example, Newsletter 128 article ‘Making roundabouts safe for walking and cycling’). Studies have shown how feeling unsafe on the road is a significant barrier to cycling for all age groups. We’ve particularly pushed the county council to use these Dutch design features at Fendon Road, helping to bring in the Dutch Cycling Embassy as consultants (see image above) to refine its design. We’ll continue to be involved as details are developed ahead of construction and hope that it will set a trend for better and safer roundabouts across the country.