The Queen Edith’s Way scheme has brought the topic of roundabouts once again to the fore. The existing roundabout at the junction with Fendon Road has a dismal safety record with at least 21 recorded crashes involving cyclists in less than 10 years. The county council is rightly looking to replace it with something better, but whilst their current proposal is on the right track, it needs refinement to bring it up to the latest standards for walking and cycling safety. It makes sense for our resources to be focused on replacing dangerous roundabouts and junctions with safer designs, because these are the places where most injuries occur.

Roundabouts can have many safety and capacity advantages over standard crossing junctions, but only when designed correctly. Otherwise, there are only two unsatisfactory ways to cycle around the typical poorly-provisioned roundabout: (1) take the lane and move like a car (but not everyone is up to this) or (2) go to the outside and follow the walking route (but this is very awkward and unnatural). The halfway approach of trying to cycle along the edge of the carriageway is commonly seen but is very unsafe because of the high risk of passing cars cutting you up.

Thankfully, a better design exists that is both safe for people travelling in every mode and sensible for those people who are cycling: a walking/cycling-priority single-lane roundabout commonly found in the Netherlands.

The design of these roundabouts hinges upon the provision of a new type of crossing: the parallel walking-and cycling-priority crossing. Up until earlier this year, British road regulations did not permit the installation of a Zebra crossing immediately adjacent to a cycle-priority crossing. Thankfully that bureaucratic snafu has now been resolved.

The diagram shows one arm of a walking/cycling-priority roundabout. Several crucial yet subtle features enhance the predictability and safety of this junction:

Some kind souls in Purmerend, a city in the Netherlands, have set up a popular webcam looking over a walking/cycling­priority roundabout in their city, at the website: rotondecam.nl. While you’ll have to excuse their anticlockwise flow, you will have a chance to observe in action the features that I have written about. Mark Wagenbuur has also written an article and produced a video demonstrating the safety features of the walking/cycling-priority roundabout, seen at https://bicycledutch.wordpress.com/2015/10/13/explaining-the-dutch-roundabout-abroad/. 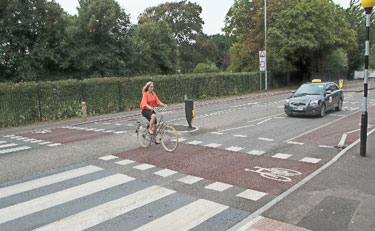 Can driver-priority roundabouts be made safe?

Driver-priority roundabouts are not recommended in cities and towns where many people will be walking and cycling; however it is possible to make them safer with some changes. A safe driver-priority roundabout requires that the crossings be placed much further outside the roundabout: at least two car lengths, if not more. Single-lane exits are still essential, as is speed reduction. Splitter islands with sufficient refuge space are absolutely mandatory. All of these features make it possible for people walking and cycling to judge whether or not it is safe to cross.

However, there are two main problems: firstly, it requires much more land to lay out all these features properly; secondly, and more importantly, driver-priority roundabouts are extremely difficult for people with visual impairments to walk around. Someone who is unable to see relies upon the assistance provided by a formal crossing. The walking/cycling­-priority roundabouts have formal Zebra crossings on all their arms, across both cycle and carriageway lanes, making them much easier for people to use on foot. If we want people to walk and cycle more, then we must give their infrastructure priority both on paper and in fact.

Can roundabouts with higher levels of motor traffic be made safe?

The type of walking/cycling-priority single-lane roundabout described here is generally rated for up to 25,000 cars per day: sufficient for almost all possible roundabouts in Cambridge. Expanding beyond that means using a more dangerous configuration: adding another circulating lane for motor traffic. The problem is that an added lane also increases speeds and encourages weaving manoeuvres, making the roundabout significantly less safe for everyone.

There are changes that can be made to alleviate some of the danger, but at this point you have to ask yourself: why try to attract more cars? The last thing we need is more cars coming into Cambridge. Rather than sacrificing our safety and quality of life on the altar of car capacity, we should be finding ways to limit the number of cars entering Cambridge. Out in the countryside there might be places for roundabouts that handle more motor traffic but once speeds start to rise much above 20 mph there is no safe way to mix people and vehicles. If anyone ever suggests the idea of building a so-called ‘Turbo’ roundabout at a junction where people walk and cycle then the response must be firm: grade-separated paths for people, or no deal at all.