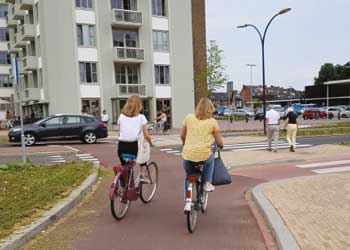 I saw a letter in the Cambridge News recently predicting doom and gloom, and indeed complete chaos, because the roundabout at Fendon Road and Queen Edith’s Way was going to be rebuilt (see article). I’d just like to address some of the points made and hopefully make people feel a little better.

Firstly, yes this is the first Dutch-style roundabout in the country. But that is not because it is a bad idea, but because most other local authorities prioritise car traffic over people walking and cycling. Cambridge is doing something different, as is Transport for London, which has similar roundabouts in the works.

Secondly, this roundabout will have the same compact layout for motorised users as the Radegund Road roundabout. This one calms traffic because drivers must explicitly turn left to get onto the roundabout, turn right to pass around the centre island, and turn left again to get off the roundabout. These three turns mean that they have to slow down, reducing the risk of a collision and reducing harm if their car does hit anyone. These safety features have not reduced the capacity of the junction. The new roundabout can handle a large volume of traffic more smoothly. Yes, a compact roundabout already built in Cambridge has enabled a potential increase in the volume of car traffic. This is because when traffic is circulating more slowly it is easier for drivers to find the gap needed to join the flow, especially for larger vehicles like buses. It is also easier for people to walk across the road.

The new design will put people first, not as an afterthought

Lastly, the assumption in the letter is that everybody who is commuting in Cambridge is driving. That is patently not true, as many people walk, cycle, or use public transport. But putting that aside for a moment, many people also drive. However, just because some people drive does not mean we should design roads in cities only for cars. We have plenty of motor-vehicle-only roads, such as the M11, where people can drive very fast and there are no people walking or cycling. They are also the safest roads in the country. But in cities, we need to allow people to walk, and cycle, and use the bus. All those three are significantly more space-efficient than driving a car.

We should care about people. Providing space for people to walk and cycle, and priority for space-efficient ways of moving around, means that there will be fewer barriers for walking or cycling or using a bus, which means less traffic congestion. Which means fewer delays for ambulances and buses.

Fendon Road roundabout should not become like the M11. It should not become a traffic sewer. It is in an area where people live, people need to move through to get to school, or work, or to visit friends. And that’s what the plans for a new roundabout at Queen Edith’s Way are doing, giving space to allow people to move safely without a car, while also providing for those that need cars to use them safely. The new design will put people first, not as an afterthought. Let’s have a space that allows people to move through this important junction without having to be inside a private motor car. Let’s have a space designed for people first.