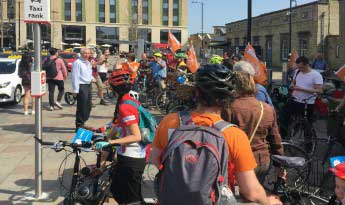 In 2017, Cycling UK promoted a ‘Space for Cycling’ bicycle ride in nine cities in the UK. The idea was to demonstrate the need for safe and accessible cycle routes to encourage cycling as a means of sustainable, healthy transport. The event was successful and it was promoted again in 2018 with the same aims. As Cambridge is the foremost cycling city in the UK, it was decided at the April monthly meeting that Cambridge should be one of this year’s locations.

The date of the ride was timed to coincide with International Earth Day. It also preceded our local elections, which gave us the opportunity to highlight the need for local councillors to support cycling in our city, and to take part in our election survey.

We had support for the event from other organisations with similar objectives – Transition Cambridge, Cambridge Carbon Footprint, Outspoken and CTC Cambridge. Local councillors were invited to join us and show their support, to give them an opportunity to talk to local people who are concerned about cycling issues. The route was sketched out by members in the April monthly meeting and then finalised by Roxanne De Beaux, Simon Nuttall and me a few days before.

On the day there were 40-50 cyclists who gathered at the start outside the Guildhall before 10am. Once we knew the number of participants we decided that we could ‘take on’ Mill Road bridge. When the route had been considered we had decided to turn left onto Mill Road either from Tenison Road or from Argyle Street (meaning we would cycle back towards town and over the bridge). We knew we would have to ask marshals to ‘hold up’ the traffic on Mill Road so that all the cyclists could move out in one group and thus make more of an impact on this very crowded part of Cambridge.

It was important that we tried to keep together on the route to ensure there was enough impact. This was well organised by our marshals – thank you to Tom and John – who held up the traffic on junctions to allow most cyclists to pass through together or in reasonably large groups. We also had planned some ‘re-grouping’ areas which worked well.

We were followed all the way up Mill Road by a Stagecoach bus whose driver was not at all impatient with us, and I also noticed some taxi drivers waving at us or giving us a ‘thumbs-up’ sign around the station.

We were also lucky to have support from Daniel Zeichner MP who cycled with us. In Station Square he gave a speech. He thanked us for a ‘civilised and nice morning’ and encouraged us to continue with our campaigning aims, as we were the ‘premier campaigning group in Cambridge’. He fully supports the need for less motorised traffic and more cycle parking in Cambridge and a video of his full speech can be found at www.camcycle.org.uk/blog/2018/04/vote-bike-this-election/

We had lots of orange flags and T-shirts which made us identifiable as a group; and luckily it was a lovely, sunny spring day which made the slow-paced and positive-spirited bicycle ride ending on Parker’s Piece a great event.