Each year, Camcycle sends a short list of questions to each candidate standing for election to find out what they think about improving provision for cycling in Cambridge and nearby. Their responses are then published on our website to assist residents in their voting decisions.

Generally, candidates were very supportive of cycling, with nearly every single respondent claiming to cycle regularly around Cambridge. The survey questions were written by Camcycle members and volunteers with questions specific to each ward, testing candidates’ understanding of local cycling issues.

The election survey was also picked up by other media outlets including ‘Bike Biz’ which relished reporting on some of the more interesting responses from UKIP candidate Peter Burkinshaw.

Camcycle has conducted elections surveys since 2007. The effectiveness of the survey has influenced other cycling campaigning groups including the new Waterbeach Cycling Campaign, which also surveyed local candidates this year.

Camcycle rides for ‘Space for Cycling’

Our Space for Cycling ride on Saturday 21 April was a great success. It was a sunny day and our more than 40 participants enjoyed taking up some space for cycling on our Cambridge streets. There was a sense of safety in numbers which made even a ride down Mill Road an enjoyable activity. With our orange T-shirts and Camcycle flags we made quite a sight and we were greeted with friendly waves from passers-by.

We were joined on the ride by Cambridge MP, Daniel Zeichner, who gave an excellent speech while we stopped in Station Square. He complimented us on our campaigning work and noted the need for more space for cycling.

By the end of the ride we had rehearsed our chants ‘What do we want? Space for Cycling!’ and ‘What will we do? Vote Bike!’. We’re ready to hold another Space for Cycling ride for the next election, and as many elections as it takes for our decision-makers to start making the bold decisions required for a truly cycling-friendly Cambridge. 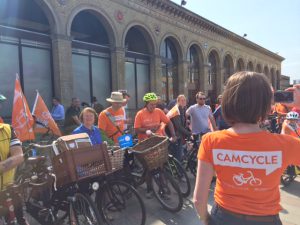 The weekend of 21 and 22 April was also very busy, with Camcycle volunteers also delivering our new ‘Romsey Cycling News’ to nearly every home in Romsey, updating residents on our Street Cycle Parking project, legalised two-way cycling in Romsey streets, our election survey and the Reach Ride. It was a great grass-roots volunteering effort which saw a number of new members sign up immediately after receiving the newsletter. We think this pilot project has been a great success and hope to see volunteers driving similar activities in other wards. 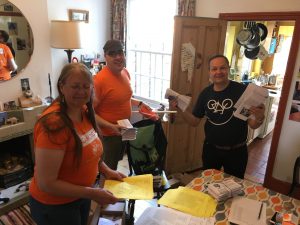