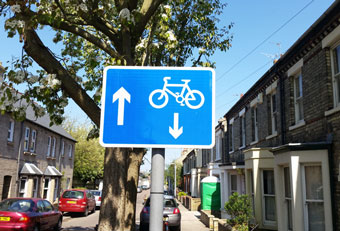 Allowing two-way cycling wherever it is possible encourages cycling by making it quicker and more convenient. Over the last decade, various one-way streets have been made two-way for cycling, a programme which we have campaigned for and welcomed.

As previously reported (see Newsletter 134) 15 of the remaining one-way streets in Cambridge were proposed to be changed. All except one were approved by the Cambridge Joint Area Committee. It was clear from the debate at the meeting that there was little dissent to the general principle of allowing two-way cycling. After over 10 years of campaigning, the argument has now been won and we would like to thank councillors on the Cambridge Joint Area Committee who approved this simple but highly welcome change.

The history of making streets two-way for cycling in Cambridge over the last decade shows that it creates few problems in practice, and avoids unnecessary criminalisation of both local and more strategic cycle journeys. People no longer need to take unnecessary detours, and can reduce their time spent on more hazardous roads.

We were particularly keen to see the changes in Newtown approved, where the maze of one-way streets makes cycling unreasonably difficult, and in Romsey, where residents are criminalised for cycling to their houses. There were 22 objections, a tiny number given the thousands of people who live in the area and fewer than the number of people writing in support. Many of those objecting claimed that two-way cycling is not safe. Yet there is now 10 years of evidence from the many other streets in Cambridge that are now two-way, that this is not the case. You can see this for yourself on the Bikedata website (see later in this Newsletter).

Sadly, Brookside was not approved, although there is no evidence in the collision data of any problems. There was opposition from the private schools along here, who seem to see cycling as a problem rather than the solution. If these schools think that the number of motor vehicles here makes things dangerous, they should be challenging their parents as to why they are causing such a problem.

Our policy is that all residential one-way streets in Cambridge should be two-way for cycling unless there are specific reasons in a particular case why this would not be possible. We therefore are keen to see Panton Street, for instance, included in a next batch.

We understand that the newly approved changes will take several months to implement on-street. Therefore, in around February 2018, it will be legal to cycle both ways in: