Allowing two-way cycling wherever it is possible encourages cycling by making it quicker and more convenient. Over the last decade, various one-way streets have been made two-way for cycling, a programme which we have campaigned for and welcomed.

The history of making streets two-way for cycling in Cambridge over the last decade shows that it creates few problems in practice, and avoids unnecessarily criminal­ising both local and more strategic cycle journeys. People no longer need to take unnecessary detours, and can reduce their time spent on more hazardous roads.

For instance, the change to allow legal two-way cycling on Kingston Street several years ago allows people to avoid using Mill Road and removes two right turns. Despite opposition from one particular councillor at the time, this has proved to be a useful and safe route. We are unaware of any evidence of increased collisions in any of the streets where two-way cycling is now permitted.

The original purpose of making these streets one way was not to make cycle journeys more difficult but to stop two-way car traffic, so it is good to see that this long­standing error is being addressed. 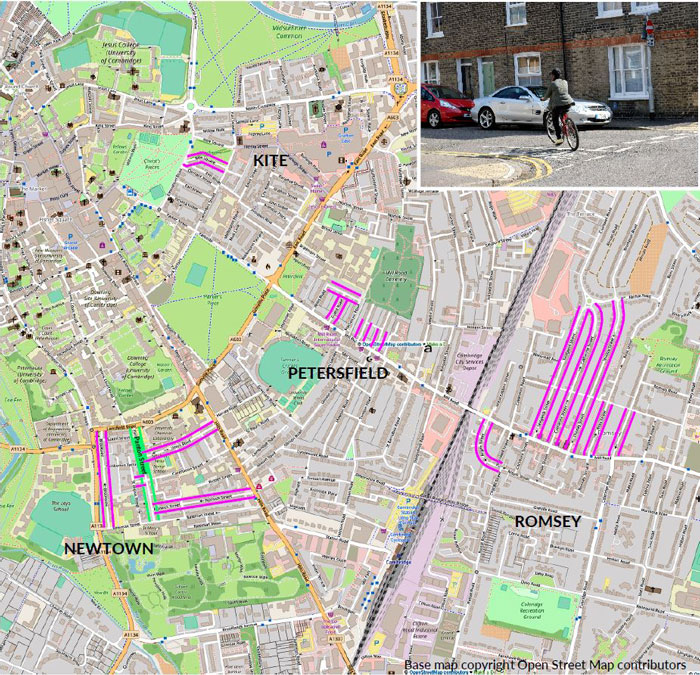 A new set of streets, to tackle many of the remaining anomalies in Cambridge, has just been consulted on. (These streets are marked magenta on the map.)

The map shows this latest set of streets that are being proposed to become two-way for cycling. We strongly welcome all the changes.

The streets of Romsey in particular are well overdue for making two-way. These streets are currently heavily dominated by car storage, to the detriment of every other use. Allowing two-way cycling will go a small way towards normalising these streets.

If there are remaining objections to any streets, these should be trialled with a Temporary Traffic Regulation Order and reviewed within 18 months. We feel this would demonstrate that there are no safety issues in practice.

We would like to see the remaining anomalies resolved in a future phase.

We are disappointed that the county council still is not progressing Willis Road because of some residents being vociferously (and in our view unreasonably) opposed, the result of which is that their fellow residents and other members of the public, who should have an equal say in the use of their streets, are unnecessarily criminalised if they cycle both ways.

We also remain disappointed that some streets in Newtown are not being considered. We are keen to work with residents to see wider traffic reduction measures in that area that would allay their concerns, though we remain strongly of the view that two-way cycling would be sufficiently safe to to implement it immediately.

In particular, we are extremely disappointed at the failure to include Panton Street (marked bright green on the map). The twin mini-roundabouts on Trumpington Street are a major crash blackspot. Permitting two-way cycling in Panton Street would permit numerous people to avoid that area. It would also enable a more pleasant and safe way for those cycling to the many schools in this area.

How you can help

If possible, please let us know that you have written.