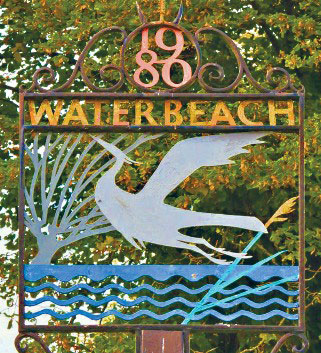 Waterbeach Cycling Campaign has been set up to advocate for cycling and other forms of non-motorised transport as the village undergoes significant development over the next few years, in particular due to the redevelopment of Waterbeach barracks (see Newsletter 132).

Our mission is to make Waterbeach connected, safe and enjoyable for all types of cyclists, pedestrians, mobility-scooter users and anyone who wants an alternative to the car. We have developed five visions for the village and its connections.

We’d like to see a route for cyclists and pedestrians to the Research Park which is currently only accessible by car. Should a major business park be accessible by car or motorbike only? Why shouldn’t those who don’t drive have the opportunity to work there? A pedestrian/cycle link to it would inevitably improve the site’s attractiveness to businesses, particularly pertinent as it has never been fully occupied since it was built more than a decade ago.

Further to the north is the hamlet of Chittering which is part of Waterbeach parish. Again, the only way for Chittering residents to access Waterbeach, in the same parish, is by car (or by waiting for a bus to stop by a grassy ditch on the side of the A10).

The pavement alongside the A10 is very narrow, with a stream of fast-moving traffic including heavy trucks, making this route very risky and intimidating. There’s no room for error when passing another cyclist or pedestrian.

The path along the River Cam (Haling Way) is also narrow and has a hazardous mix of cyclists, pedestrians and dogs especially at the weekend.

The recent Greenway drop-in events held in Waterbeach were well attended and the prospect of a Greenway linking Waterbeach and Cambridge has enthusiastic support.

As the new town develops residents of the villages of Lode, Bottisham, Burwell, Reach and the Swaffhams will want access to the new facilities. Similarly new residents will want to get across the River Cam to these villages, and beyond to Wicken Fen and the surrounding countryside. There is a bridge over the river; however, it is reached by a half-mile footpath. Previous attempts to have this upgraded to a bridleway have been blocked by a landowner, resulting in a gap in National Cycle Network Route 11. We’re looking for innovative ways to solve this.

We’d also like to see a route to Horningsea and onwards to east Cambridge, because Clayhithe Road is no longer safe to travel on by bike as it has become a rat-run into Cambridge to avoid the congested A10.

Cottenham is a regular destination for many Waterbeach villagers on account of the secondary school that the majority of children attend. Many of these schoolchildren have told us that they would like to cycle to school, which would provide them with much greater flexibility for attending after-school activities. This would require a safe crossing over the A10 and a cycle path, both of which we’ll be campaigning for.

Rat-running through the village during rush hour to avoid the A10 congestion is a real problem. This also leads to ongoing concerns regarding safety, in particular for the primary school. We’d like to see safe routes for children to walk and cycle to school in the hope that it will reduce the number of children driven to the school.

We’re hoping to encourage more cycling within the village by providing facilities to make it more convenient, with cycle parking outside shops and pubs.

It’s an ambitious set of goals. However, with support from local decision-makers and funds from government and devel­opers, we’re hoping our visions for making Waterbeach and the surrounding area connected, safe and enjoyable will become reality.

We’re asking people to support us by registering on our website www.waterbeachcc.com. As the numbers of supporters grow that’ll help to add credibility to our campaign. We can be contacted by email waterbeachcc@gmail.com. We have a Facebook page and are on Twitter.