Camcycle is delighted to welcome, and support, the campaigning of local residents who will be affected by the Waterbeach Greenway. 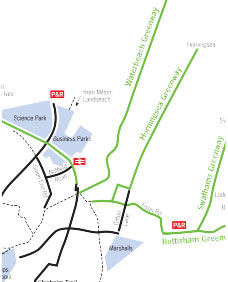 Residents of Waterbeach have established the Waterbeach Cycling Campaign to give the villagers a voice as their neighbourhood is affected by substantial development over the next few years. Our Waterbeach campaign is developing five Visions for cycling and other forms of non-motorised transport in and around Waterbeach. We want residents to have the option of safe, non-motorised travel north, south, east and west of the village and in the village itself.

Many people in Waterbeach already cycle, many of them commuters. However, we have to put up with some dreadful links to Cambridge and other villages. Cycling alongside the A10 on a narrow and poorly maintained path is a horrible experience and especially dangerous in the winter. The tow path along the river Cam is more pleasant but is less than 1m wide in places, poorly maintained and shared with pedestrians and dogs. Going north there is no route other than on the A10 itself to the Research Park and Chittering, which is part of the Waterbeach parish. There’s not even a footpath. The village itself is a rat-run during term time, providing significant hazards to children cycling or walking to school.

The nearby development of up to 10,000 new homes, plus in-fill development within the village itself, poses significant challenges with regards transport and travel. However, this should also create opportunities for development of infrastructure for sustainable transport such as cycling.

We were very pleased that Waterbeach was one of the two villages to be selected for first consultations on the Greenways. A well-designed Greenway from Waterbeach to Cambridge would be a huge encouragement to those in the village and the new development to cycle to Cambridge rather than use the already overcrowded trains or crawling along the A10 in a car. As the new town develops its public facilities and business parks will also be used/accessed by Cambridge residents.

As a new campaigning organisation we’re still finding our feet, but we’re looking forward to working with Camcycle, councillors, council officers and developers as we work towards our five Visions. We welcome new supporters and volunteers to help with our campaigning. Although cycling is our focus we’ll be looking to improve the travel options for anyone that wants to get about without using a motor vehicle.

I am part of Horningsea Connect, a local campaign group trying to find a safe cycling route between Horningsea and Waterbeach. The B1047 was a quiet country road when I first moved to Cambridgeshire and provided me with a safe and picturesque route from Haddenham, where I lived, to Fulbourn, where I worked. However since then it has become a different beast entirely, with thousands of cars a day using it to get from the A10 to the A14 and to destinations on the east side of Cambridge, in particular, the Marshall complex, Fen Ditton, Barnwell, etc.

A number of Horningsea residents cycle to Waterbeach for transport, shopping and social contact. It also provides a route for cyclists travelling through Horningsea on their way to and from work on the east side of Cambridge.

We started by surveying possible routes; we looked at cross-country routes east and west of the B1047 and quickly discovered that there was no support to be had from landowners in developing this idea. One was sympathetic but, not surprisingly, had no wish to open his land up to cyclists, walkers etc.

A survey was carried out (i.e. I cycled up and down the B1047 a number of times) noting where there seemed to be enough verge to create a cycle path. The problem is that there is no space along the whole length, and to use it as it stands would necessitate crossing the B1047 a number of times. Later, while out on one of our village cycle rides we saw that the road between Barrington and Sawston (though relatively narrow) managed to squeeze a useable cycle path alongside it, even allowing a grass border between the road and the path.

We are now researching a proposal to re-align parts of the B1047 to take advantage of the existing verges and create a cycle path in tandem with the road.

Another possibility would be to upgrade Haling Way and provide a bridge that would cross the Cam north (or near the centre) of Horningsea. This has a number of problems apart from the existence of the east/west proposal that would cross the Cam near Baits Bite Lock. As it is, to cycle north from Horningsea to Waterbeach means travelling more than a mile in the wrong direction (i.e. south and west) before even getting to Baits Bite Lock (which does not allow for child-carrying bikes, trikes or indeed anything else!) and finally, Haling Way.

Failing any of these proposals, we would have to look to some pretty severe traffic-calming measures along the B1047 to make it safer and quieter. The traffic restriction at Worts’ Causeway is, I think, a possibility in this respect but I can’t imagine it being hugely popular in the motoring fraternity!