It has been announced that `Do-Optimum’ (see Newsletter 130) is now the baseline plan for the Milton Road City Deal scheme.

Contrary to this, however, Chris Tunstall, the City Deal’s Interim Director of Transport, gave a presentation which called into question whether the roundabout would be retained at all, and raised the spectre of adding significant amounts of tarmac for bus lanes.

Camcycle remains committed to the ‘Do-Optimum’ plan as laid out by the Milton Road Alliance and will continue to advocate for the City Deal to stick to the principles of the plan as closely as possible.

You may view the `Do-Optimum’ proposal and video from the Local Liaison Forum on http://miltonroadalliance.org/ and their twitter account.

This is only half of the project and we look forward to the fully segregated lanes that have been proposed for the Nuffield Road to Milton Road section and for Nuffield Road past the primary school and medical centre.

In response to repeated parking in cycle paths in the area, a consultation was held on a Traffic Regulation Order (TRO) to prohibit waiting in certain areas Camcycle is concerned that this omitted entirely the section from between Nuffield Road and Frank’s Lane; and that southbound between the Frank’s Lane bus stop and Scotland Road.

The consultation was not widely publicised and Camcycle is concerned that the response will be skewed towards residents who want to park cars in the cycle lane and will fail to take into account the many people who use this route to cycle to work in places like the Science Park. We have submitted a response supporting the waiting restrictions and asking for further extension to the other areas (at the very least during peak times). 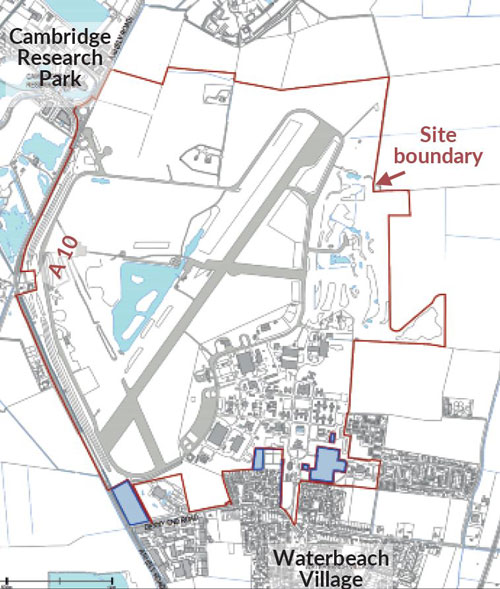 Camcycle objected and produced a comprehensive, 11-page response (to be discussed fully in Newsletter 133).

The Site-wide Framework Travel Plan was completely unrealistic in the context of a village within 5 miles of Cambridge, in opposition to all policy ambition in the county, and will result in poor planning for the needs of the people who will be living and working in Waterbeach. Other concerns included poor design of roadway cross-sections, junctions and cycleways.

We welcome the effort to install cycle parking here, but objected because it gave no details of the proposed design of the cycle shelter and stands. In addition, the 8.4m-wide shelter was insufficient for the stated 20 bicycles.

Camcycle objected to the proposed unsecured, difficult to access cycle parking. The proposed diagonal stands would render at least one of the 7 spaces almost unusable. We advised that the stands should be at right angles and spaced 1000mm apart, with end stands 750mm from the wall.

Camcycle welcomes the overall intention to provide cycle parking; however, the stands should be spaced 1000mm apart as a minimum, as required by the cycle parking standards in the Local Plan. The supporting posts should be in line with a stand, not in the middle of the bay where they will effectively reduce capacity.

17/0675/FUL Demolition of existing garages and erection of 3 two-bed dwellings with associated landscaping and access arrangements. Land To The Rear Of 1 Fen Road and Rear of 179-183 Water Street, Cambridge CB4 1PB

Camcycle objected to this application as the cycle parking does not meet the minimum standards required by city council publication Cycle Parking Guide For New Residential Developments.

The space allocated to cycle parking in the open, unsecured shelter is too short and to access the cycle nearest the wall one would need to remove the outer bicycle first. 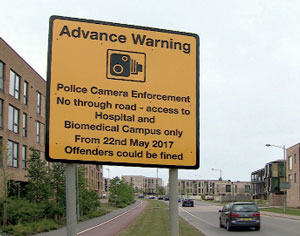 Camcycle is pleased that this document addressed many of the concerns we have raised over the past five years. We recommended that the portions of the document referring to cycling were adopted with the following important inclusions:

Camcycle is preparing a response to City Council consultation on Arbury Court improvements. We hope to have a site visit to discuss the plans and consult with Cambridge Council for Voluntary Service over concerns with cycle parking. You can respond to the consultation at https://www.cambridge.gov.uk/consultations/improvements-to-arbury-court-local-centre-have-your-say

Camcycle welcomed this revised document’s commitment to a safe cycle and pedestrian environment, but raised serious concerns over poor street design and lack of clarity over junctions (see next article). We recommended the Highways England document Interim Advice Note 195/16 and our document Making Space for Cycling. 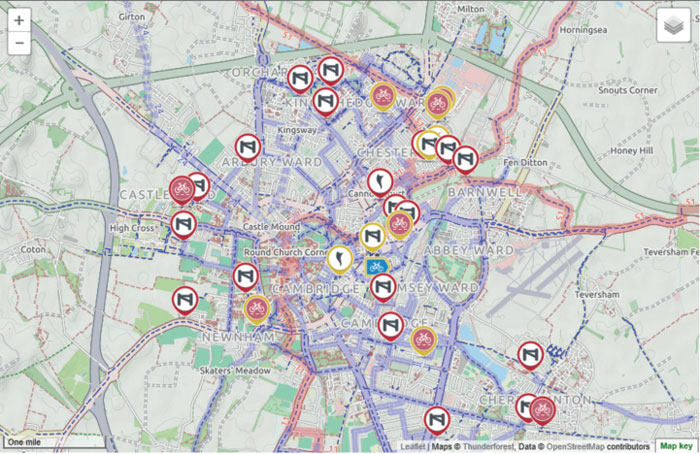 We’ve had our first success as the shin-gougers on the Nuffield Road access to the Busway have been replaced with taller and more visible central bollards.

Please add your bollard bothers to the #absolutebollards map on cycle streets www.cambridge.cyclestreets.net

Cycling UK and Camcycle have invited the new Mayor, James Palmer, to meet for a discussion about how we can work together to support improvements to cycling in Cambridge and beyond.

During his campaign he made the following commitments:

‘The City Deal has large amounts of money to spend on cycling routes and I will encourage them to do so.’
‘When new roads are built I will look in to the possibility of providing cycle routes alongside them. I will also encourage developers to include cycle routes in new estates.’
‘I am mindful of the popularity of cycling and it will be an important part of my vision for new infrastructure in Cambridgeshire and Peterborough.’