At last year’s Camcycle AGM, Robin Heydon stated that walking is the most important mode of transport. It is the most human way to travel, from pre-school to past retirement, whether fully-able or via the assistance of a powered walking-equivalent mobility aid, and all the range in-between. Every journey has a walking component. Any place that strives to be friendly must have good provision for walking.

The Greater Cambridge City Deal has put forward a set of principles that prioritises walking, cycling and public transport. We agree with and support these principles, but the initial design offerings from the City Deal consultation process were deeply unsatisfactory and did not meet the stated goals. The proposals for Milton Road stripped out almost all the trees and created a kind of ‘bus motorway’ that would cram people who are unprotected by vehicles into the leftover margins of the road.

In response to community outcry, the City Deal formed Local Liaison Forum (LLF) workshops that brought residents and stakeholders together to talk about the future of Milton Road. Conversations that began during these workshops between local residents and members of Camcycle led to the collaboration that has produced the ‘Do Optimum’ conceptual design, which shows a viable alternative to the City Deal’s much maligned ‘Do Maximum’ and ‘Do Something’ designs.

The starting point of the ‘Do Optimum’ design seems an obvious one: a street that prioritises walking and cycling must be a place for human beings, and therefore must incorporate good pavements, sufficient crossings, separate cycle lanes, and plenty of plantings and trees. The safety features are especially important at junctions, where most collisions occur, and which have traditionally been poorly designed for the needs of people on foot or cycle. A street designed to prioritise public transport must also incorporate these features, as every public transport trip is bookended by walking or cycling segments. We must always remember that we don’t invest in public transport simply for the sake of moving large vehicles around; public transport is about helping people get to the places that they want to be, in an efficient and equitable manner. In the debate about infrastructure, this basic fact is often forgotten.

A classic illustration of this point occurred at a Milton Road LLF where someone had questioned the need for street crossings near bus stops. To a person who only thinks about moving vehicles, crossings are a nuisance: they stop traffic every so often! To a person who thinks about public transport as a service that is about helping people, crossings are essential: almost every bus journey, there and back, will require crossing the street at least once. Without that crossing, the bus trip cannot happen. If people are afraid to cross the street, then they will be afraid to take the bus, and everyone will be worse off. Safe street crossings are a fundamental part of prioritising public transport.

We need to be sensitive to the changes in character that take place along Milton Road. The ‘Do Optimum’ plan uses different types of public transport priority measures in different segments of the street, each according to its needs. Near the Busway, Milton Road is more industrial and busy with motor traffic. Here it is sensible to consider dedicated bus lanes. At the other end, just north of Gilbert Road, the street is narrower and very residential, with many families walking and cycling to school regularly. Much of the car traffic has already been siphoned off by Elizabeth Way. A wide expanse of tarmac is counterproductive. Instead what is needed is more crossings and ample verges with trees to protect the cycle lanes and pavements that families are cycling and walking along. And in the middle segment, between the Golden Hind and Arbury Road junctions, the street is a gateway into an urban neighbourhood. In a street scene framed by trees and verges, the pavements and cycle lanes will be even busier than they already are. The public transport priority measures must shift from the tarmac-heavy approach near the A14 towards a lighter touch that makes more efficient use of road space via peak-time turning restrictions.

We need smart and well-targeted interventions. The ‘Do Optimum’ plans show ideas about how to carry out these types of measures but the final design arrangement is yet to be decided. Part of the reason is because some of these choices will depend upon expected changes to the regional public transport network. Looking from a broader perspective, public transport in Cambridge requires a wholesale review to produce a properly coordinated, integrated, multi-modal network that is suitable for the growing and changing city. The City Deal should be conducting a process of service planning to determine the details of the future regional public transport network. That is a step that should be taken as soon as possible. In the meantime, there are some measures that can be implemented independently of the outcome of the service planning. For instance, we do know that there will need to be some form of bus service on Milton Road, for local access at the very least. Therefore, we propose good bus stops with platforms built to enable step-free boarding, long enough to fit buses with multiple doors, provide ample waiting space, amenities, and separation from the cycle lane accompanied by a Zebra crossing to connect to the footway. Properly designed bus stops shorten dwell times and speed up the bus service, making it more punctual and reliable. Good bus stops are a fundamental part of prioritising public transport.

Most of the City Deal’s proposals for public transport assume that buses will still mainly travel the same way ten years hence that they did ten years ago. But that doesn’t really make sense: transport needs have been shifting for quite some time already and that will only accelerate in the coming years. Cambridge is a polycentric city, but the City Deal’s transport plans do not always acknowledge that fact. Cambridge has two bus operators and a major railway line, but there is little integration between any of them. The railway line runs parallel with Milton Road, between 1 to 1.5 km to the east, providing a dedicated public transport corridor with higher capacity and capability. 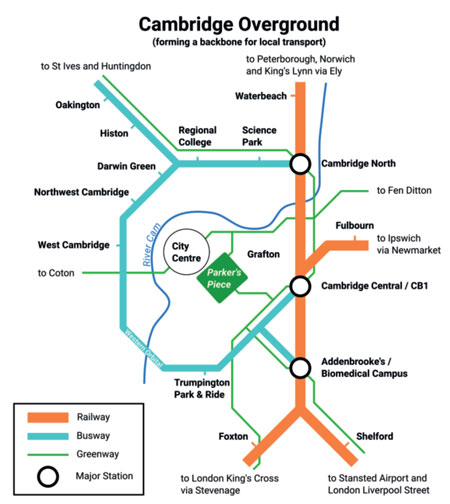 Within five years it is virtually certain that there will be three city railway stations serving three major employment centres: North Station, Central Station and South Station (Addenbrooke’s). We don’t need to wait decades for a rail network within the city: we already have one well on its way. As railway service levels increase, many of the trains running through the city will have to be scheduled to stop at all three stations, providing the basis of an express metro-style service. Additionally, it can be expected that the existing intercity trains will be further supplemented by new train lines serving the growth of demand for a Cambridge-focused regional rail network. The combination of a selection of intercity and regional services will provide the frequency needed to make this ‘Cambridge Overground’ feasible for everyday trips.

Such systems already exist and are highly successful in many European cities.

With rail taking on such importance locally, it’s vital to have bus services planned and designed around connecting with the three stations. Connections are the only way to make public transport relevant to more people. No single route can stand alone and serve more than a small fraction of limited kinds of trips, but a network that works together dramatically increases the utility of every single option. An integrated and coordinated network of walking, cycling and public transport gives people the freedom and confidence to make all kinds of trips at all times of day. Getting from A to B should be simple and easy, no matter how you put it together: by bus, rail, cycle and foot. Integrated fares, coordinated scheduling, and a regional approach to service planning are all very important parts of public transport priority. The City Deal’s proposal for a Western Orbital busway could be a key link. Together with the railway, the two would form a dedicated necklace of public transport encircling the city, connecting with local buses, and serving many important centres of activity. The Cambridge Overground diagram shows conceptually how the railway, the Western Orbital and various walking and cycling Greenways might fit together in the not-too-distant future.

The ‘Do Optimum’ plan for Milton Road shows our ideas for how these principles might be applied to produce a better street for people, but it’s only one street. The purpose of the City Deal is to build the infrastructure that supports the housing and transport needs of the coming decades. To quote from the City Deal website:

‘The Greater Cambridge City Deal is a unique opportunity to secure the future of Greater Cambridge as a leading UK and global hub for research and technology, support economic growth and improve quality of life for residents of Cambridge and South Cambridgeshire.’

That’s exactly right. So let’s get this done right on Milton Road, and across the whole of the Greater Cambridge region. The collaboration between Camcycle and the local residents’ associations shows just how effective real public engagement can be. Camcycle is determined to keep working to help ensure that the City Deal commits to healthy, sustainable and optimum infrastructure that we will be proud to hand down to the next generation.

To view the ‘Do Optimum’ plan, please visit www.camcycle.org.uk/miltonroad