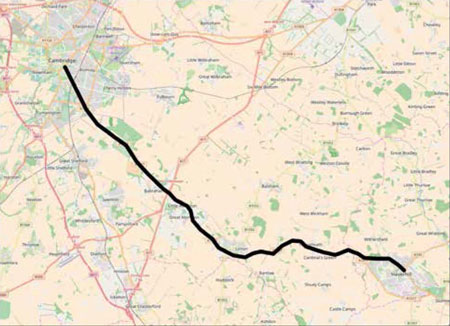 Camcycle attended the City Deal Joint Assembly meeting and expressed its disappointment at the low quality of the cycle provision in the draft plans for the A1307 corridor.

We asked what design standards, if any, are being used to help guide the A1307 scheme and advised that the scheme should be redesigned in view of Highways England’s Interim Advice Note 195/16 – Cycle Traffic and the Strategic Road Network. Although this document applies to Highways England schemes, the standards and designs it contains are equally applicable to the county network.

We also queried why the cycling provision is not being designed to support the Greenways project to provide a safe, pleasant route linking the villages and employment centres from Linton to Sawston and Shelford into Addenbrooke’s and Cambridge.

The Assembly approved further technical work to develop and refine the options, including increased cycling through improved infrastructure to support sustainable travel between homes and jobs. 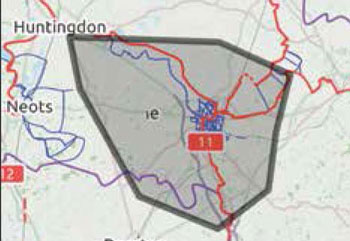 Camcycle submitted comments to the county council’s Economy and Environment Committee in support of taking the Greenways proposals forward. Camcycle added that any serious commitment to enabling all-purpose, year-round travel by non-motorised users means using high-quality standards and maintenance practices. We recommended formally adopting, as a starting point for quality design, Highways England’s Interim Advice Note 195/16: Cycle Traffic and the Strategic Road Network. This specifically considers the needs of both parents cycling with children and people with disabilities.

The Committee resolved to: 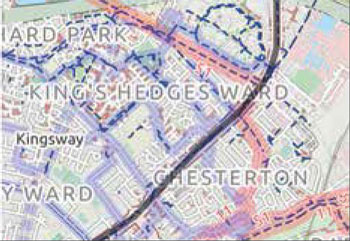 Proposals for Milton Road are now to be discussed at the June meetings of the City Deal Assembly and Executive Board rather than in March as had originally been scheduled. Camcycle continues to campaign for the alternative ‘Do Optimum’ scheme (see Newsletter 130) and has been out canvassing local residents (see later in this Newsletter).

Proposals for Histon Road have also been postponed to the June meetings of the City Deal Assembly and Executive Board. Camcycle has been promoting a set of safer junction designs; working together with the residents to oppose the destruction of trees and front gardens that would be caused by City Deal’s proposed road widening.

How to keep up with the City deal

The best way to be informed about what is coming up with the City Deal is to look at the forward plans. An updated plan is included in the agenda files for each City Deal meeting. To make it easy we will post these to a dedicated Cyclescape thread as soon as they become available. 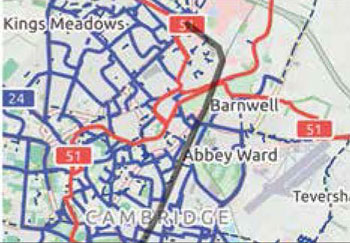 A north-south pedestrian and cycle path from the River Cam to Coldhams’s Lane broadly parallel to the railway line. This includes a new underpass under Newmarket Road, a bridge across Coldham’s Brook, replacing a culvert with bridge on Coldham’s Common, new paths and improvements to existing paths. Following the approval of Abbey-Chesterton bridge (see later in this Newsletter) the next step in making the Chisholm Trail a reality is ‘Phase 1’ which will be considered by the Joint Development Control committee (date to be confirmed). Please join our discussion and keep up-to-date with developments. 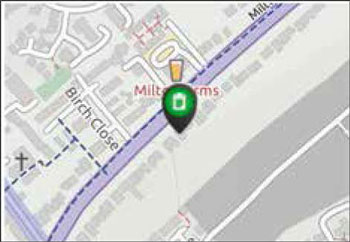 Camcycle objects to this development as the cycle parking, whilst superficially meeting standards, is not fit for purpose and we do not accept that there are truly 14 usable cycle-parking spaces within the store, given the proximity of the stands to walls and the door. Camcycle finds it unacceptable that, on the basis that the flats are each capable of housing at least two people, there is insufficient cycle parking to accommodate single bike ownership for each occupant. 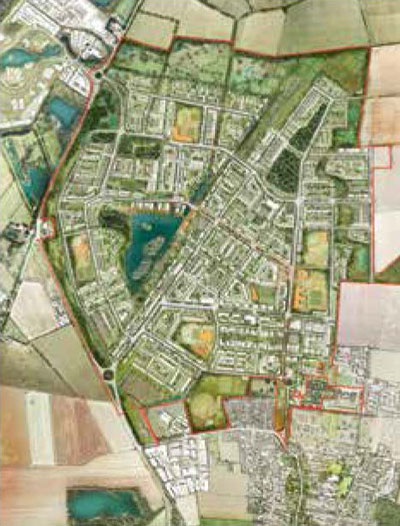 Camcycle is currently working through the plans to formulate our response, however we deem it wholly unacceptable that the applicant wishes to defer upgrades to the Highway network. By delaying these they will ensure that a car-dependent culture takes hold.

Camcycle responded that, in the absence of a proposal to provide lighting, we support the use of solar studs in principle. We are however concerned at the proposed installation of solar studs on ‘alternate sides’ and strongly suggest that the studs should be installed in pairs, one on each side of the path, to clearly delineate the edges and direction of the path. The path is not entirely straight and the boundary could be difficult to interpolate with zig-zagging placement of the studs.

Camcycle welcomes a well planned bike hire scheme, however we are concerned that the proposed Ofo system, which doesn’t use docking stations, may put further pressure on the already problematic cycle-parking situation in the city centre. The absence of clear specifications for the bikes proposed for use in Cambridge has raised further concerns. In the existing Ofo schemes the bikes are not equipped with lights which Camcycle views as irresponsible given that lights are a legal requirement on cycles in the hours of darkness. 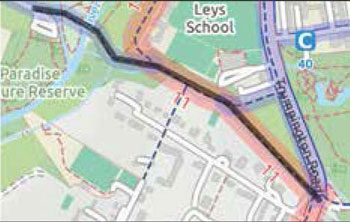 Candidates from all political parties in Cambridge have been invited to take part in our hustings to be held on 4 April (see Diary). Candidates will each give a one-minute opening statement about their party’s policies in relation to cycling in Cambridge and will then take questions.

At the end the candidates will give a closing statement lasting one minute.

Camcycle is developing our annual questionnaire through which we engage with the candidates, scrutinise their views, and press for their commitments to cycling.

Please join our discussions over what issues should be included in our questions.