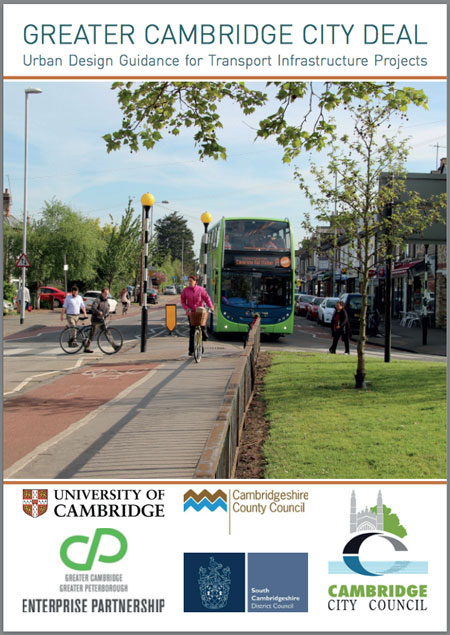 An updated version of this design guide, now titled ‘Urban Design Guidance for Transport Infrastructure Projects’, is scheduled to be approved by the City Deal Board and Assembly at their meetings in March.

This latest version is very concerning as yet again it sets such low requirements for our city’s infrastructure.

Camcycle believes that, at the very least, this design guide should meet the standards of proven high quality cycle schemes within Cambridge and, ideally, that it aspire to improve upon these. Camcycle has submitted a letter detailing points where the Guidance could be modified to ensure that traffic congestion is reduced and an improved urban environment is achieved. We included a number of street cross sections to illustrate how our suggested changes would have an impact.

Although there is no formal consultation on this document we hope that our submission will support a better version for the second attempt of this very important document.

Camcycle is pleased that the construction of Phase 2 of the Hills Road Cycleway is soon to commence. Phase 1 has already seen a massive increase in cycling on Hills Road, despite the hazardous junction at Long Road and poor connection to the Hospital site. Camcycle hopes that Phase 2 will further boost the numbers of people using bikes to get to and from Addenbrooke’s and the Biomedical Campus, as well as giving residents a better route into the city centre. We hope that the Phase 2 works will be completed in a timely manner avoiding the lengthy delays that plagued Phase 1 and that careful consideration is given to ensuring safety for people on bicycles during the works.

How to keep up with the City Deal

The best way to be informed about what is coming up with the City Deal is to look at the forward plans. An updated plan is included in the agenda files for each City Deal meeting. To make it easy we will post these to a dedicated Cyclescape thread as soon as they become available. 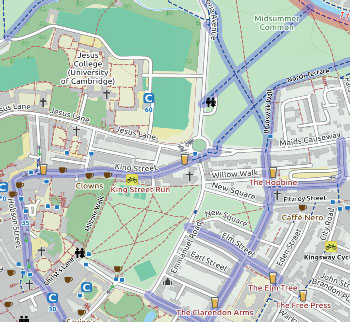 Camcycle objected as cycle parking was insufficient for residential use in this location. There were a number of fundamental design issues, including a 1.5m wide cycle parking shelter that is not deep enough to cover standard cycles.

Creation of 5 new flats through change of use of HMO and takeaway and new roof extension and rear annexe.

Both Camcycle and the city Cycling and Walking Officer raised concerns about the lack of detail of the proposed cycle racks. 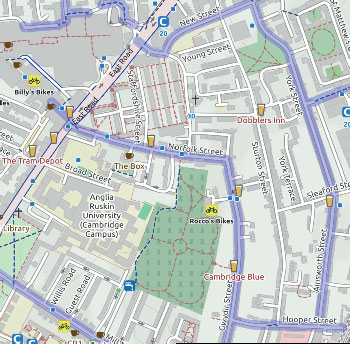 Cycling and the Justice System – All Party Parliamentary Cycling Group

Camcycle submitted a comprehensive response to this inquiry on whether the current judicial system is serving all cyclists. The inquiry focused on four key areas:

Camcycle has been consulted on the designs for two more residential and commercial buildings prior to the planning application stage. We are assessing these for cycle parking quality, accessibility, the potential for future expansion of Cyclepoint parking and implications for the Chisholm Trail.

There are all kinds of bollards, chicanes and other vertical obstructions on cycle routes in Cambridge. Many may be unnecessary, some are outright dangerous and many could be improved, for example by being made more visible. We’ve had some success getting the bollards on the Busway Cycleway improved and now we want to take on the whole city. Help us by sharing your bollard bothers on Cyclescape 2961.

Following the motion passed at our AGM we have resolved to:

We would like to have all cycleways in Cambridge named as a means of recognising them officially and ensuring they are registered in emergency service databases etc.

The latest news is that the planning application for the Abbey-Chesterton bridge will be determined on 16 February by the City Council Planning Committee. The Phase One Chisholm Trail application will now be determined by the Joint Development Control Committee, probably on 15 March.

Cycle route between Horningsea and Waterbeach

Camcycle member Bert Santilly and a group of local residents are campaigning for a safe cycle route between Waterbeach and Horningsea along the B1047.

They have met with Councillor Rob Turner (South Cambs District Council) and are surveying the road route, a possible off-road route and current cycle use of the B1047.

Camcycle is very concerned about the many issues with the CB1 Station development and is developing a survey report of the site. One issue is the poorly designed and dangerous junction of Great Northern Road and Tenison Road.

Local residents have conducted traffic surveys on Great Northern Road and a meeting has been organised with the Highways Department, councilors and developers