The new Tesco store at Fulbourn opened at the end of June. There were two cycle-related changes supposed to be associated with the new shop.

Firstly, the traffic lights at the Robin Hood junction at Cherry Hinton have been replaced. And secondly, plans for replacing the cycle route on Fulbourn Old Drift have run into difficulties.

It is already clear after a fortnight that there is significant extra traffic in the area, especially in the early evening. Crossing the Cherry Hinton bypass to and from Fulbourn is much harder. 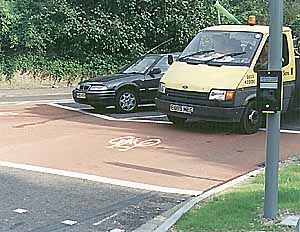 Forward stop lines are great, but frustrating if there’s no way to get to them, as at the Robin Hood junction at the far end of Cherry Hinton Road

I mentioned the Robin Hood plans in the last newsletter, because they

The rebuilt junction follows the original plans exactly, and therefore suffers from all these defects.

We wrote to the County Council on 4 April, as soon as we had seen the plans, but our representations seem to have been completely ignored, and at the time of writing we still have not received a reply to our letter, four months on.

The construction work has gone ahead very quickly, and there has been no public consultation. The planning work was done by a consultancy in Manchester and the County’s position seems to have been that they should be grateful for whatever they could get, instead of holding out for a better scheme. We propose to take the issue up with the consultants and Tesco management.

Despite its shortcomings for cyclists, the scheme has at least not made things any worse (which previous policy of trying to increase traffic capacity for the new shop would have done), and it is a significant improvement for pedestrians.

There is an unmade section of road between the Cherry Hinton Bypass and Fulbourn Hospital, which is well used as a quiet route to Fulbourn. It is a signposted cycle route, despite the inadequate surface. It ends at a level crossing, which is classified as a bridleway.

Regrettably, this level crossing has been the site of several suicides of patients from the hospital, although fewer in recent years because of a change in patient management strategy, the general run-down in the size of psychiatric hospitals, and alarms placed on the track. 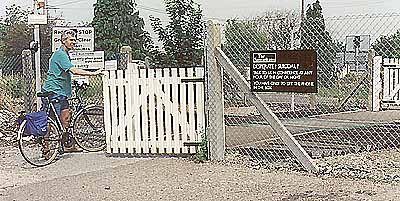 The Cyclists’ Touring Club and Friends of the Earth campaigned some years ago to get the crossing closed and replaced with a route on the south side of the railway, and it seemed that the Tesco store, regrettable though the whole development may have been, might provide the opportunity to do this at last.

The sticking point is a short (100 m) section between the rear of Tesco and the hospital. The hospital land here is a graveyard, and therefore cannot be used. The only available land is that alongside the railway track, so the path might be very narrow.

The County Council Environment and Transport Department has made a formal objection to its own plans! This is because it would mean closing a bridleway, and the Department appears to object to any such proposals. There have also been objections from the Ramblers Association and the British Equestrian Society. This is very interesting, since neither we nor the CTC have been formally consulted about it at all. I have lived in Fulbourn for 13 years, and regularly use the crossing, and have not in that time seen a horse on it. Automatic objections seem very short-sighted, but the Ramblers’ Association have a more valid point, in my opinion, because of the narrowness of the corridor.

STOP PRESS: it may be possible to widen this very narrow section somewhat, according to the latest letter from the Council.