I said in the last newsletter that time would tell in seeing how the new County Council administration would affect cyclists. Well, time has told rather more quickly than I imagined. One of the first actions of the new Tory-run council was to suspend the planned work on the Royal Cambridge Hotel junction at Lensfield Road and Trumpington Street, and then to try to abandon it altogether. Since then there has been another serious collision at the junction.

As you will know from previous articles, the problems cyclists face at the junction, resulting in about nine injury accidents each year, are the main reason for reworking it. This junction is top of the priority list for attention. Yet the new Council put a motion to the Environment and Transport Committee on 12 June, proposing to replace the scheme with a rag-bag of other measures, including two accident remedial measures, both a long way down the list of priorities and neither dealing with a cycling problem.

Six months delay putting in traffic lights, and how many more casualties?

Perhaps because they got a hard time over the steep increase in bus pass prices immediately before this item on the agenda, and just possibly because I mentioned it in my petition address (see separate article), the motion was withdrawn. The decision on this junction was deferred to October for reports from officers. Had it gone ahead, this would have amounted to throwing the petition back in our faces. The procedure for dealing with problem junctions is a long-standing one, based on an objective scoring system agreed among Councillors, which has been trampled over by the new Council.

Only three weeks after this, Gary Bailey, who works at the Cambridge University Engineering Department right next to the junction, was struck by a car on his way to work. As a result, Gary has a leg in plaster and has since had to go back into hospital for an operation on his ankle. Normally, collisions like this wouldn’t be noticed publicly until well after the event, but because the Engineering Lab is part of the Cycle Friendly Employer scheme, we got to know about it the day after it happened.

As a result, with Gary’s permission, we wrote an open letter to the man who must bear some moral responsibility for his injuries, the new Chair of the Environment and Transport Committee, Councillor Alec Stenner, and circulated it to the press and other councillors. The text of our letter is below. 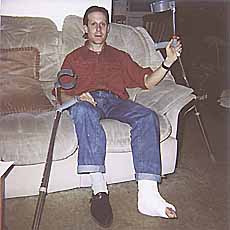 At the time of writing, we have not received a reply from Councillor Stenner. He did not respond to the press either, so possibly he is on holiday.

We would like to introduce to you Gary Bailey. Gary is a person, not a statistic. He was cycling from Lensfield Road to Trumpington Street on Monday last, when he was struck by a car on the mini roundabout at the end of Lensfield Road. The collision was typical of the kind that have been observed there over several years between cyclists and motor vehicles.

Gary was taken to Addenbrooke’s Hospital with a broken fibula (lower leg bone). This is a serious injury, and will keep him off work for a month. He will be unable to use his normal means of transport for many months, and his bike has been destroyed.

This collision would not have happened if you had not deferred the reconstruction of the Royal Cambridge Hotel junction. The roundabouts would have been removed by now. As you know, the priority for accident remedial measures is determined by reference to a scoring system, agreed with all party support. You chose to ignore this system, and as a result Gary has been in hospital.

On the basis of past experience, there are likely to be two more collisions at this junction before you review it at committee in October, and work would probably not be able to start immediately, with the prospect of further casualties.

We urge you, for Gary’s sake and that of the other people who will come to grief here, to go ahead with the reconstruction of this junction and bring forward the decision from October. We are just thankful that we are not writing to tell you about Gary Bailey’s death.

Please help: write a letter to the Director, Environment and Transport Department, Cambridgeshire County Council, Shire Hall, Cambridge CB3 0AP. Please tell them how important it is to provide junctions which are safe for all road users, and how upsetting it is that injuries have occurred which could have been avoided if the work had gone ahead as planned. Specifically, ask for the work to be carried out and your letter to be brought to the attention of the Committee. If you want to copy it to Councillor Stenner, his address is: