During National Bike Week, we sought nominations for ‘Golden Bell ’97’ awards for the best changes for cyclists. Anglia Railways was one of the six winners, for their positive attitude in providing extra space for cycles on local trains.

On Tuesday 22 July, Simon Nuttall and I presented the award to Clive Morris, Anglia Railways’ customer service manager. Anglia TV and the Cambridge Evening News reported the event. Here’s the story behind the scheme. 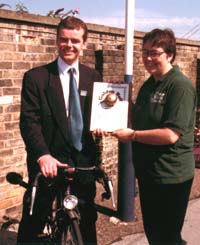 Anglia operates 16 local trains, including those from Cambridge via Newmarket and Bury St Edmunds to Ipswich. Previously, each train had space for just one cycle.

The ‘Bikes on Trains’ project set out to increase the space for bikes to four per train. Anglia is keen to point out that the project has been run in conjunction with a number of partners who helped with funding, including Cambridgeshire, Suffolk and Norfolk County Councils. Additionally, part of the funding was supplied by the Cycle Challenge Initiative. (This is the initiative which also part-funded Cambridge’s Cycle Friendly Employers Scheme.)

I’ve been particularly impressed with the amount of effort put into consulting cyclists throughout the scheme. The Cyclists’ Touring Club, the Cyclists’ Public Affairs Group (CPAG) and Transport 2000 were all represented on the working party. I also understand that a major part of the design phase was spent satisfying current health and safety requirements.

In one design of rack (pictured in the ‘Stop Press’ at the end of Newsletter 10), the four bikes are suspended vertically from wall-mounted hooks, and a strap is placed around one wheel. The advantage of this design is that the bikes can be extracted in any order, although it took me a couple of attempts to get used to swinging my bike into place. Anglia staff are on hand to help if necessary, especially as the racks are adjacent to the wheelchair ramp (another Anglia innovation).

In the other design (which I haven’t actually seen yet), there are two areas for pairs of bikes. The second bike stands in front of the first one, so the order in which bikes are loaded is significant.

Once the first two trains were converted (in late 1996) volunteer cyclists were encouraged to test the racks, and give feedback. The conversion will be completed in Autumn 1997, and Anglia have announced that they will then reduce the cost of taking bikes on trains to a flat fee of £1, and remove time restrictions on cycle carriage. They’re also working on improving the infrastructure at stations, with improved cycle parking and access to platforms.

All in all, I feel Anglia Railways are worthy recipients of a ‘Golden Bell’.