As well as Anglia introducing bike spaces on their previously very restrictive rural trains, WAGN introduces new trains on the London lines over the next six months. In an exhibition at the station, a leaflet makes a firm statement about carrying cycles:

“Cycles will be accepted on these new trains, but only in one of the passenger vehicles where they can be safely accommodated. This will be indicated on the exterior of the train. Generally, cycles are accepted during off-peak times and at weekends, when trains are less crowded”. 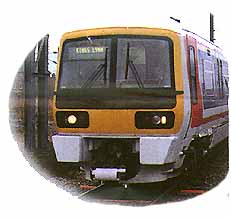 Would I be very cynical in thinking that the new trains will be carpeted, and that this may go some way to explaining why it is safe to have them in the doorways on the old trains and not in the new ones?

However, despite the fact that some of the trains are already in service, a letter asking for more details – are ban times to be extended, are they tip up seats, will the stopping trains still use the older rolling stock, will there be notices asking passengers sitting in the cycle area to move when requested, elicited the following efficiently prompt but non-committal reply from WAGN:

“I have made enquiries into the matters which you have raised with regard to the conveyance of cycles on board the new class 365 trains, and have been advised that the position regarding the carriage of cycles is still being evaluated at this present time, and will be in place prior to the expected full introduction of these trains with effect from the summer timetable which comes into operation on 1st June 1997.

“I will be in a better position to reply more comprehensively to the matters which you have raised, once I am in possession of the full details of this provision, and will, therefore, write to you further at that time.

“I would, however, advise that I am given to understand that the current peak period policy for cycles using Cambridge station will remain at the time of introduction of the new trains to our services, and that stickers will be located on carriages to indicate the area which cycles will be permitted to be stored at the appropriate times.

“Please be assured of our continued attention in these matters. 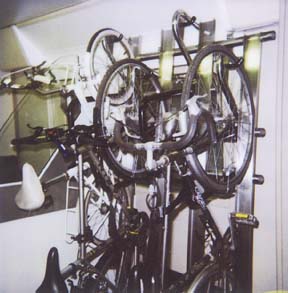 One of two styles of bike rack which Anglia Railways is fitting in all its trains between January and September 1997.