200 cyclists, including riders of trishaws, a unicycle, and various kinds of trailers, turned out on Sunday 11 May to celebrate cycling on our second annual Grand Cycle Ride round the city, despite the rough conditions (and if you’ve forgotten how rough the conditions were, your correspondent was blown to a halt before she ever reached the Ride).

By 2.30, a good crowd had gathered (although not as many Campaign members as we’d hoped), being careful to keep off the cricket pitch and not to block the players’ access to the pavilion (memo: avoid the cricket season next year?). Among them was our Cycling Promoter, Anne Taylor, who said ‘It’s nice to be here second time around, and still in post.’ (See Newsletter 11.) Then, bang on cue, the heavens opened. We pulled up our hoods and huddled against the buildings, wondering if we would have to give up after so much hard work, but it was all over in five minutes, and the rest of the Ride enjoyed sunshine (although not calm, and you can’t have the wind behind you all the way on a circular route). 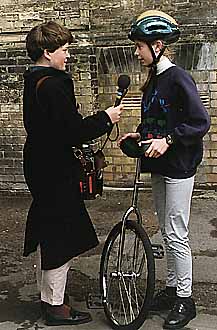 Our cycling MP, Anne Campbell sent a message of support, and Margaret Wright, our local Green Party spokesperson, launched the ride, reminding us that it was part of Environment Week, which can only succeed if it actually changes things in the environment. Let’s hope our contribution helped. Then, after a few words from Jonathan Whiteland on safe cycling (not heeded by all participants, I noticed, even some Campaign members), Margaret cut the ribbon, and cyclists streamed across Parker’s Piece. A splendid trailer led the parade. Built by Richard Taylor and towed by Simon Nuttall, it bore the crucial slogan SAFE STREETS FOR CYCLING, as well as ‘Bike is best,’ and ‘The future is pedal powered.’ 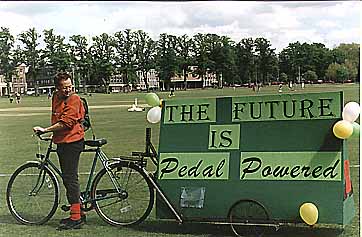 The ride was good humoured and without mishap, until we turned into Hobson Street and came face to face with a tour bus, forcing us into single file or even onto the pavement: a prime example of a street that’s not safe for cycling. When I got to the junction with St Andrew’s Street, I was amazed to find a policeman calmly observing the proceedings. ‘Can’t you stop the traffic?’ I enquired. ‘No, I can’t do that,’ he replied, ‘I’m only here to help you.’

In the end we all got out of Hobson Street, and rode up Sidney Street and Bridge Street with a merry ringing of bells. Jannett Klinke, who was taking photos, reports that passers-by were commenting on the number of children taking part, and the number and variety of bikes (or, rather, human powered vehicles: not all of them had two wheels). Particularly eye-catching and festive was the trailer loaned by Geoff’s Bike Hire and decorated by Lisa Woodburn with balloons and Campaign banners.

At the top of Magdalene Street we were pleased to see a proper traffic policeman stopping the traffic and letting us all turn into Northampton Street in one go. We also had a police car bringing up the rear, which stopped us being infiltrated by too many cars and taxis, and probably prevented the outbreaks of motorists’ bad temper we suffered from last time. Then down the Backs, where Mike Tabrett commented how good it was to see Queen’s Road packed with people, but no pollution and no noise except the ringing of bells. 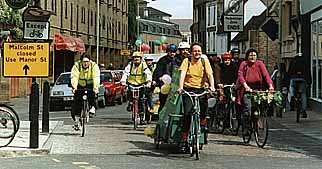 Then we were on the home stretch: Silver Street, where again we had problems because the road isn’t really wide enough for two-way traffic if one of them’s a bus, up King’s Parade and into the Market Place, where Clare Macrae welcomed and thanked everyone on behalf of the Campaign, saying how wonderful it was to see so many cyclists gathered together, and reminding us (if we needed it) of the need to continue campaigning for safe streets: ‘Keeping cyclists off substandard paths, that’s what we’re about.’ Barry Louth, of the City Council and Unison, pointed out that two hundred people had just travelled three miles ‘using no fuel except the sandwiches you had for lunch’, and encouraged us to ‘enjoy the power of cycling’. He told us that Unions are now recognising the need to plan for a sustainable future – and maybe what Unions think will matter a bit more under the new government.

Afterwards, people had their first chance to buy the Campaign’s new brightly coloured T-shirts, and the organisers were euphoric, if exhausted. ‘Despite wind and rain, we got as many people along as last year,’ said Paula Watson. ‘We gave ordinary people, including children, the chance to show they want a safe environment to cycle in,’ added Lisa. And, what’s more, the rain held off until all the equipment was packed up and put away. Somebody up there supports cycling.

Many thanks to all the organisers – Clare, Lisa, Mike, Paula and Slim – and to everyone else who helped, especially Dave Earl for press and publicity, and Lisa’s niece Diana for looking after the stall all the time we were riding round town.