An initial stakeholder meeting has been held to consider proposals to make changes on part of Trumpington Road. This proposed scheme is the one of those partially funded by the City Cycle Ambition Fund. Note the tight time scales. See: www.camcycle.org.uk/newsletters/109/article3.html 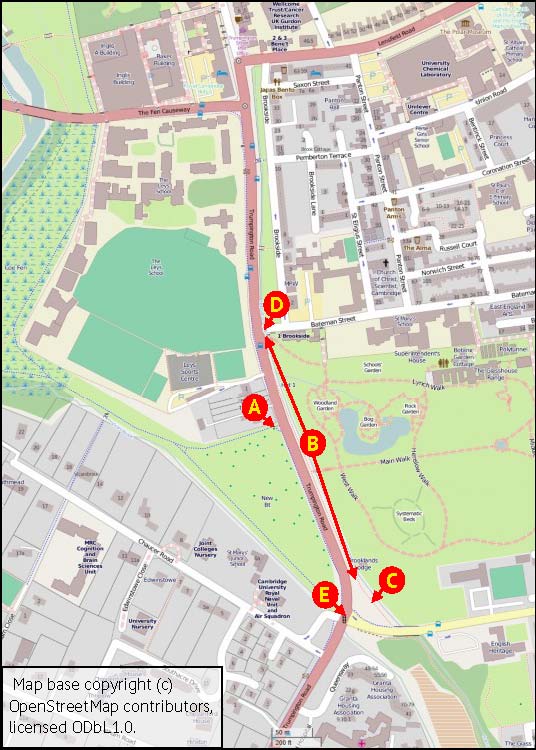 Unfortunately even the tight timescale for submission has caused problems, as the initial diagrams for this scheme submitted to DfT were less than clear.

This whole-day workshop started with an on-site meeting at 8.15am outside the Botanic Gardens, where the early risers saw the traffic conditions at the time that school drop-offs, those with cycles on the Brooklands Ave to Newnham corridor, and car and cycle commuters on Trumpington Road all conflict.

This day was helped by two expert outside facilitators, who have made studies of cycling in twelve cities worldwide (what a wonderful job!), as well as a good meeting room and good food at the adjacent Cambridge University Botanic Gardens.

Those attending included representatives of local schools and residents associations, travel plan organisers from local businesses and the County Council, as well as several active members from Cambridge Cycling Campaign.

The Campaign strongly opposed the changes made here in 2002 that created cycle lanes in the ‘dooring’ zone.

‘Those of you unfortunate enough to have been using Trumpington Road for the last five months will know that cyclists appear to belong to an underclass. The requirements for safety, comfort and convenience for them lie well below those for motorists, Park and Ride passengers, and pedestrians’ and see: www.camcycle.org.uk/newsletters/74/article5.html ‘Blatant disregard for standards in Trumpington Road continues’.

Fortunately we do seem to be making progress, and despite the ways in which reductions in car parking or space for dropping off affect both the Botanic Gardens and local schools, there was understanding from them of the need to remove car parking, at least from one side of this busy road.

So what can those on cycles expect to gain?

Unfortunately there is, at the time of writing, some confusion over the exact road width, with measurements from Google Earth suggesting 12.5m and some of the tabled documents suggesting a couple of metres more. Some approximate measurements suggest car parking at 2m, cycle lanes at 1.1m and motor traffic lanes at a little over 3m, so Google may be right. The shared use path is about 2.7m.

Currently, with the car parking next to the steep bank, drivers and passengers all exit into the ‘dooring zone’, so that is the prime candidate for removal. Of course the junctions at either end also give problems, and the existing light-controlled pedestrian crossing is not on the desire line. I heard someone say that moving the crossing might cost £100k. We could then have a toucan crossing [A] on the direct line from Sheep’s Green Bridge to Bateman St, giving an alternative route to going along Brooklands Avenue, as well as a better location for those going to the Botanic Gardens or Bateman Street.

On the road we’ve the obvious and simple solution of a far wider outbound cycle lane and a ‘buffer’ zone outside parking retained on the opposite side.

That also permits the retention of the coach pick-up and drop-off area (15 min limit). Those bays are much used both for educational visits to the Botanic Gardens and by the several independent schools in the areas, none of whom have alternative locations. No one would want such coaches to enter Newtown.

More radically, one of the requests by many, including some in the Campaign, is for the conversion to ‘unsegregated dual use’ of the existing footway adjacent to the Botanic Gardens [B]. This would cater for the significant demand for a route from Brooklands Avenue to the Newtown area and beyond, either to the schools or to avoid the Fen Causeway double mini, with its high crash rate for cycles.

We’ve opposed such proposals in the past and would today, but without improving conditions which involve crossing and re-crossing Trumpington Road at unsatisfactory locations, many would continue to cycle illegally on the east-side footway.

Of course there is an even more radical solution to achieve that desired route. If we left the west-side relatively untouched for the moment, there would be space for a ‘twoway’ cycle route on the Botanic Gardens side! In the longer term, moving the footway onto the common land would enable a northbound cycle route on the inside of the car parking, but the legal complexities mean that could not be created in the time frame available for this first stage.

So how could such a ‘port to port’ (keep right) scheme between Brooklands Avenue and Bateman Street work?

There is space to the rear of grass and flowers at the corner of Brooklands Avenue [C] to create a ‘cut-off’ cycle path, thus also avoiding the congestion at the Trumpington Road crossing. This would lead in to the existing (removed) car parking and run adjacent to a widened outbound cycle lane.

With such a route there would be little excuse for even children on bikes to use the footway, hence reclaiming it for rightful users, and it would also give a ‘safer route’ for the less confident to and from the new housing off Brooklands Avenue. For this to be effective changes would also be needed at the Bateman Street junction [D], and further restrictions on the rat-run much used by taxis from the station would be welcomed by all. Closing the junction to motor traffic might be difficult but would give easy access for cycles to Brookside and greatly improve permeability for those on foot or bike.

Some have suggested that we need a ‘hard division’ (say a double kerb) between new cycle routes and existing motor traffic to prevent the incursion of such traffic. I do not favour such a system unless there is lots of space, and where in Cambridge is that true? Any hard margin reduces the actual and effective width for those on cycles. Less obviously, a softer margin gives flexibility, for snow, leaf and general street clearance, and also permits the passage of emergency vehicles under very congested conditions. I’ve seen this on Hills Road bridge, where an ambulance previously would have taken an excessive time to fight its way through congestion, now progresses swiftly, as either motor vehicles can decant into the wide cycle lane or the emergency service vehicle can use the lane. This can be seen on Klaas Brümann’s excellent ‘Youtube’ (http://www.youtube.com/watch?v=XTO49pufD8k, 1 min in). A white line alone may not be an adequate deterrent to illegal use, but the large plastic blisters (Armadillos) in use in Camden seem more effective without preventing any essential use.

Another issue here is the parking of large vehicles in narrow bays. Whatever happens, restriction on such vehicles stopping there must be imposed (see photo).

The two external facilitators also suggested that the Brooklands Avenue lights [E] might be a good trial site for a ‘pedestrian/cycle mingle’ where one phase of the lights is for cycles and pedestrians in ALL directions.

The Campaign has previously suggested Silver Street/ Queen’s Road for such an experiment, but it would require a DfT-agreed trial or legislative changes. Would this accord with our ‘segregation’ policies? Such arrangements seem to work well in other European countries.

An added complexity here is that no work can start until after the ‘Tour de France’ in July 2014 but funds need to be spent before May 2015.

So overall this is an excellent location to demonstrate the point that removing car parking is an easy and effective way of improving conditions for all those on cycles. It could also be a good opportunity to improve one, the other, or both routes from Hills Road to Newnham via Sheep’s Green. It may not be possible to do all the work either with the funds available, or in the restricted timescale, but we can work towards other improvements as legislation permits, or legal obstacles are removed.