Those of you unfortunate enough to have been using Trumpington Road for the last five months will know that cyclists appear to belong to an underclass. The requirements for safety, comfort and convenience for them lie well below those for motorists, Park and Ride passengers, and pedestrians. To put this into context, in 1997 the Campaign counted some 1300 cyclists in 12 hours on Trumpington Road south of Long Road, and flows will be much higher at the Brooklands Avenue end. 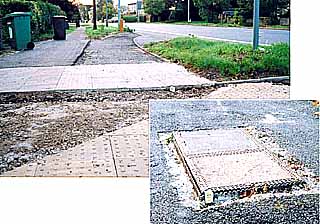 The improvement of some two miles of shared use have made this a ‘disaster area’ for cyclists. Although work started in July (see Newsletter 37), from Brooklands Avenue to Exeter Close on Shelford Road only one short section is finished, with much of the remaining sections ending up with loose and uneven surfaces obstructed by lighting columns and street furniture.

These improvements are not primarily aimed at benefiting cyclists but, instead, allow road space to be used for bus lanes. Unlike some cyclists I’m not against this if it is part of a plan designed to reduce the amount of motor vehicles entering the city, and if the cycle route is of high quality. Unfortunately, here I don’t consider the means justifies the end, where a high quality route and other objectives are slowly being diluted.

This work is supposed to be supervised by WS Atkins (Consulting Engineers), and I had thought the plan was to complete all cycleway works by the start of the school term in September. I met Richard Preston of the County Council in May to look at working drawings prepared by the consultants, and a number of items were raised at that time. I felt the meeting was positive and it was agreed that I could email WS Atkins if I had concerns. I have never had a single reply to any of my emails to WS Atkins.

Time and space prevent me from listing all the things that have gone wrong, but I will detail some problems.

At the time of writing we are only two weeks from the opening of the new Trumpington Park and Ride site. Then it is proposed to narrow the inbound lane to 3.0 metres over a long section north of Long Road to provide space for an outbound bus lane. Will this be done even though the works on the cycleway are incomplete? What should cyclists do then: drive to the park and ride and catch a bus, or obstruct traffic in the narrow vehicle lane?

It is very clear that it was possible to schedule much of the disruptive work on the road to just the half term week, so why is it not possible to have the same standards of scheduling and control for works on cycle and foot paths?