Cambridge Cycling Campaign is organising a study tour to the university town of Oldenburg on the second May Bank holiday weekend in 2013. The study tour starts in the German cycling demonstration town of Oldenburg on Saturday 25 May in the morning and ends on Tuesday 28 May 2013 in nearby Bremen with the producers of the film and book Beauty and the Bike. This offers the opportunity to visit two cities on a single study tour.

Oldenburg’s catchment area stretches from the Netherlands in the West – with its twin town of Groningen 120km away – to Bremen in the East (45km). Oldenburg is the commercial and educational centre for the north-west of Germany (a bit like Norwich for East Anglia) with many people commuting by train and car. It has a vibrant service and knowledge economy, with very little manufacturing. Over the past 20 years Cambridge and Oldenburg have each gained about 20,000 inhabitants. With the European Medical School Oldenburg-Groningen (EMS) currently under construction Oldenburg is likely to keep growing. Oldenburg is a unitary authority (Kreisfreie Stadt) of 162,000 people and a quarter-million bicycles. It has 1575 inhabitants per km², a level that Cambridge will reach when currently planned developments are completed, on an area of 103km² (a very similar footprint to Cambridge).

Households in Oldenburg each own on average 3.1 bicycles and 1.2 cars. Out of the whole population of Oldenburg 5% walk, under 10% use the bus and 43% go by bike. Germany’s city of science 2009 has two universities with altogether a total of 20,000 students, though it has nowhere near as many language students as Cambridge. Another difference is that you will see many more older people cycling.

Oldenburg has a railway station at some distance from the centre, to which a second entry with a transport interchange was added at great cost in 2000. Making railway stations permeable has been difficult in the UK. Just like Cambridge, Oldenburg is currently building a second railway station, due to open in 2014.

Kingston Cycling Campaign visited Oldenburg in October 2005 and reported: ‘Oldenburg has an unmistakably strong and prevalent “cycling culture”, but people aren’t “cyclists” in the way that people in Britain are identified. In Oldenburg, riding a bike is not a political statement or an expression of any sort. It is simply a way of travelling.’ On his return from Oldenburg as part of the delegation, Kingston Council’s Cycle Officer, Rob Parsey, said: ‘The visit to Oldenburg was extremely positive and very informative for everyone involved. Substantial German investment in cycling during the past 25 years has resulted in cycling now accounting for a quarter of all trips made in Oldenburg, with congestion and air pollution virtually unheard of.’

Oldenburg is (with Berlin, Freiburg, Karlsruhe and Münster) one of eleven cities in Germany which the German ministry for transport lists as examples for cycle study tours; see Cycle Tour Guide (in German) and city officials have confirmed that they will give us a tour and talk.

We shall also look at ideas that Kingston Cycling Campaign found particularly transferable: 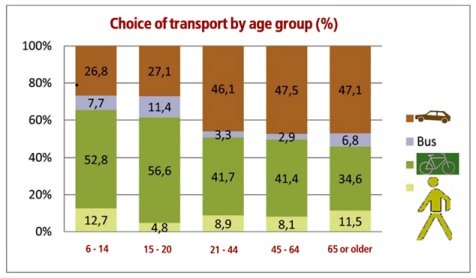 How do you get to Oldenburg?

Participants will have to make their own travel arrangements and book their accommodation. Travelling on Friday is recommended, to ensure a speedy tour start on Saturday. Please check the Campaign’s ‘Oldenburg Study Tour’ website for hints on travelling by rail, ferry, bike or air.

The accommodation and travel options should suit most budgets. The Oldenburg Youth Hostel costs from €19/night in a dorm (inc breakfast and bed linen) and about €37.50 in a single room. Hostelling International membership is required to avoid a surcharge. The month of May is busy, please book early! The organiser has booked eight beds for Friday to Monday (please contact Klaas Brümann if you want one of them). A hotel near the hostel is the Best Western Hotel Heide at about €80/night (single room including breakfast). The Kingston Cycling Campaign group stayed at Hermes Hotel near the railway station. If you can’t find accommodation, please contact the organiser. Lunches and dinners will cost no more than in Cambridge. The Fahrradstation Oldenburg (bike service at the railway station) has fairly new, sturdy city bikes for hire at a cost of €15 for three days and requires a €50 deposit and a passport. Special bicycles for riders with disabilities cost €33.50 for three days. The one-day hire of a ‘DB call-abike’ in Bremen will be €9. If you want to join please register at www.camcycle.org.uk/jumpto/regOLHB. It would help if you could please indicate your mode of transport and time of arrival and the time you plan to leave.

All participants join the tour at their own cost and their own risk. No guarantees or insurance are provided. Please bring your European Health Insurance Card. For an up-to-date detailed programme and travel information please visit www.camcycle.org.uk/events/visits/oldenburg/.