Join the Study Tour to Oldenburg and Bremen in May 2013 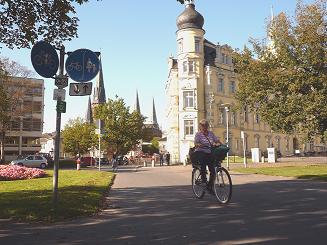 Study tours are inspirational. Based on the positive experience in Copenhagen and Assen, I am organising a study tour to my home town of Oldenburg. Join at: www.camcycle.org.uk/jumpto/regOLHB

Monday 27th is a bank holiday in the UK but not in Germany, which should give us the opportunity to meet officers and to visit schools in Oldenburg. We shall also try the base-stationless ‘call-a-bike’ rental scheme in Bremen on Tuesday. Beatrix Wupperman and Richard Grassick, producers of the award winning film and book ‘Beauty and the Bike’ http://www.bikebeauty.org/ will kindly guide us through Bremen.

Oldenburg’s catchment area stretches from the Netherlands in the west – with the twin town of Groningen 120 km away – to Bremen in the East (45 km). Oldenburg is the commercial and educational centre for the north-west of Germany (a bit like Norwich for East Anglia) with many people commuting by train and car. It has a vibrant service and knowledge economy, with very little manufacturing. Over the past 20 years Cambridge and Oldenburg have each gained about 20,000 inhabitants. With the European Medical School Oldenburg-Groningen (EMS) currently under construction Oldenburg is likely to keep growing.

Oldenburg is a unitary authority (Kreisfreie Stadt) of 162,000 people and a quarter million bicycles. It has 1575 inhabitants/km², a level that Cambridge will reach when currently planned developments are completed, on an area of 103km² (a very similar footprint to Cambridge). 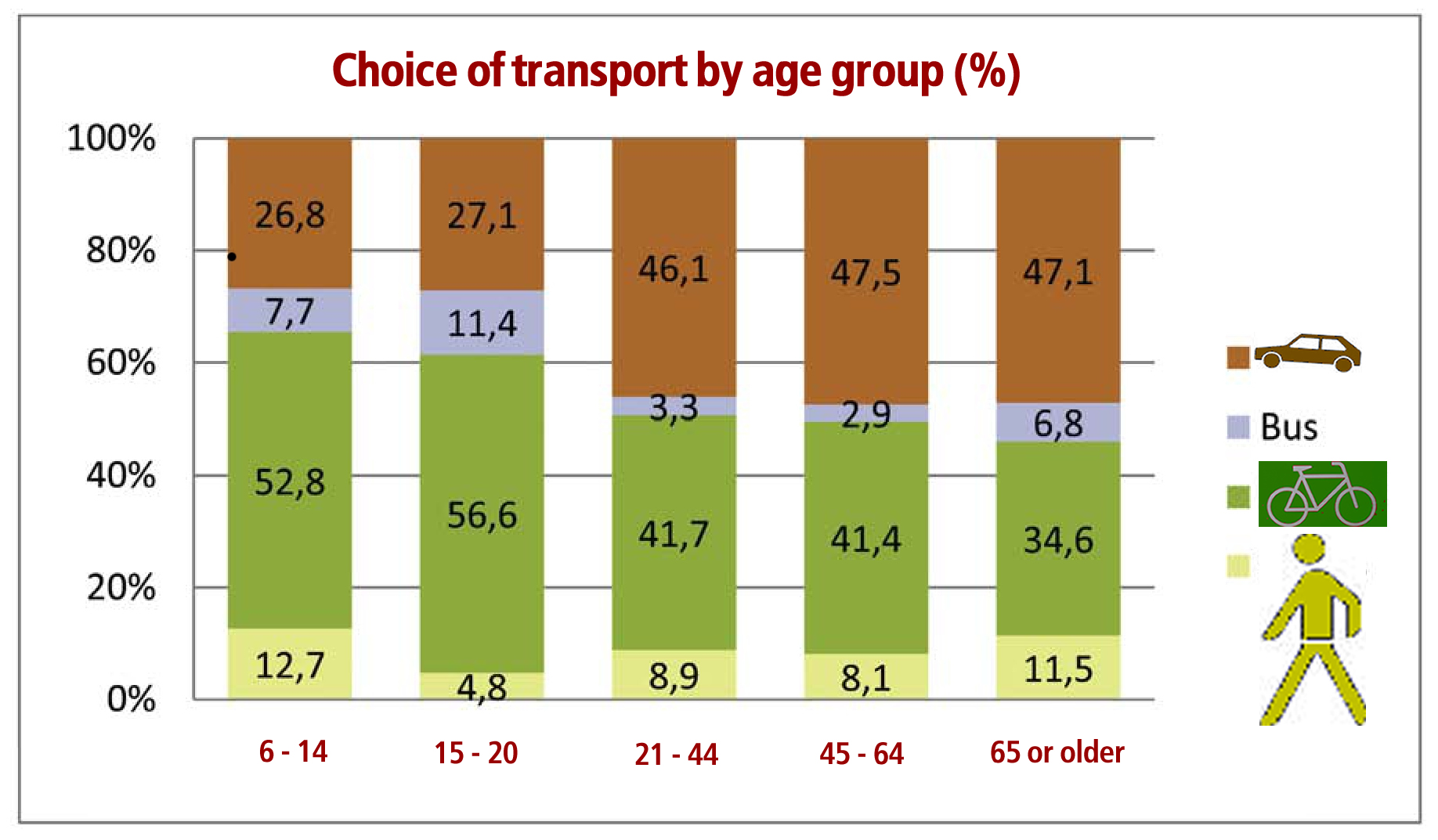 Germany’s city of science 2009 has two universities with altogether a total of 20,000 students. A noticeable difference is that you will see many more older people cycling.

Oldenburgers are all weather-cyclists, apparently in January and February last year they were second only to Copenhagen. While Oldenburg doesn’t quite compete with the luxurious cycling infrastructure in Assen, it is well worth a visit as it compares to Cambridge in many ways.

Households in Oldenburg own on average 3.1 bicycles and 1.2 cars.

More than 42% of all trips within city boundaries are done by bike. Nearly as many by car (43.6%), only 9% of trips are done on foot. Public transport is used relatively little (4.7%). In total 56.5 % of all trips are therefore done using city- and environmentally friendly modes of transport.

The tour will show that Oldenburg achieves high rates of cycling despite relatively convenient fast travel by car and cheaper car parking than in e.g. Cambridge.

Kingston Cycling Campaign visited Oldenburg in October 2005 and reported ‘Oldenburg has an unmistakably strong and prevalent “cycling culture”, but people aren’t “cyclists” in the way that people in Britain are identified. In Oldenburg, riding a bike is not a political statement or an expression of any sort. It is simply a way of travelling.‘ On his return from Oldenburg as part of the delegation, Kingston Council’s Cycle Officer, Rob Parsey, said: ‘The visit to Oldenburg was extremely positive and very informative for everyone involved. Substantial German investment in cycling during the past 25 years has resulted in cycling now accounting for a quarter of all trips made in Oldenburg, with congestion and air pollution virtually unheard of.’

Oldenburg is with the likes of Berlin, Freiburg, Karlsruhe and Münster one of eleven cities in Germany which the German ministry for transport lists as examples for cycle study tours; see Cycle Tour Guide (in German) and city officials have confirmed that they will give us a tour and talk.

We shall also look at ideas that Kingston Cycling Campaign found particularly transferable:

The detailed schedule is subject to changes.

Please check at www.camcycle.org.uk/jumpto/OLHBschedule for a detailed programme.

How to get to Oldenburg?

Participants will have to make their own travel arrangements and book their accommodation. Travelling on Friday is recommended, to ensure a speedy tour start on Saturday.

St Pancras by Eurostar to Bruxelles-Midi / Brussel-Zuid, then Thalys or ICE to Cologne/Köln and ICE/IC to Bremen and an IC, IR (Interregio) or Nordwestbahn train to Oldenburg (about 45 km), e.g. at bahn.de/.

St Pancras with Eurostar to Brussels, with Thalys to Amsterdam and then an IR (Interregio) to Osnabrück (Germany), connecting with IR or Nordwestbahn to Oldenburg (Hbf), e.g. with http://www.raileurope.co.uk/

To bring your own bike one option is the ‘bike ferry to Hoek van Holland + railway ‘ via Osnabrück (Germany) or Gouda – Groningen – Leer (Germany) to Oldenburg (Hbf).

You can print German train tickets at home, but you will need to carry the credit card used for payment as a means of identification with the tickets.

Hoek van Holland to Oldenburg by bike is 216 miles (click for GPS): http://iitm.be/Hoek-Oldenburg. The North Sea route is considerably longer.

Ryanair flies from Stansted twice daily to Bremen (though only once daily at weekends). Book early! Standard cabin luggage fits onto ‘DB call-a-bike’ racks, though these racks don’t accommodate panniers. The ‘Niedersachsen’ train ticket, which covers the tram from the airport to Bremen railway station as well as all local trains in Lower Saxony and Bremen, is about €17.50, but it does not cover the fast IC train (which won’t make much difference anyway, as the journey is only 45km). Group tickets can be cheaper.

(Prices indicated are approximate and may have changed since).

Alternative airports are Hamburg and Hanover, each about 150km away.

Fahrradstation (bike point) at the railway station (Oldenburg Hauptbahnhof, southern side). The bike rental is a charity with the aim of integrating the disabled into the labour market. Opening hours Mo – Sa: 06:30 – 20:00 hrs. Like all shops the bike rental is CLOSED on Sundays.

The total cost of the bike rental for three days in Oldenburg €17 (€3 extra for each additional day).

Special bikes for riders with disabilities for three days €31.50 (€5.50 extra for each additional day).

If you are interested in a Pedersen bike please inform the organiser, to see if we can reserve one. Their offices are near the train station.

There is a similar “Fahrradstation” in Bremen, plus the option to try a “call-a-bike” for €9 per day.

May is a popular month. Please book early!

The youth hostel is about 1.5km from the railway station.

Youth Hostel Oldenburg from €20.50/night in dorm (inc breakfast and bed linen), about €37.50 in an individual room. Hostelling international membership is required (otherwise a surcharge applies). The month of May is busy, so please book early. Eight beds have been reserved, for arrival on Friday and checkout on Tuesday, by the organiser (contact the organiser if you want one).

The Kingston Cycling Campaign stayed at Hermes Hotel near the railway station.

If you encounter difficulties in your booking please contact the organiser for help!

The train station in Bremen has lockers (at a cost of about €5 per day), which those wishing to return from Bremen back to England on this day should take advantage of. The airport in Bremen (Ryanair to Stansted) is a 15 min bike ride (or 10 min tram) from the train station. You can return a “call-a-bike” bikes at the airport by locking it and confirming the return on the bike. If you rent a bike from “Fahrradstation” you’ll have to return it at the train station. Trains run to Cologne, where Thalys trains leave to Bruxelles-Midi via Liege (if your train stops at Liège have a look at the magnificent ‘Gare de Liège-Guillemins’ by Santiago Calatrava Valls) about every hour, and there are also two ICE services per day.

For those who want to continue cycling in the area:

Join the study tour to Oldenburg and Bremen

All participants join the tour at their own risk.

Please book your travel arrangements and accommodation early and help the organiser by filling in your details at: