Around 70 people joined us for our second online AGM with guest speaker Adam Tranter, Cycling and Walking Commissioner for the West Midlands and founder of the Bike is Best campaign.

The AGM began with Roxanne’s review of 2021. Our main campaigns were Zero Carbon Streets (raising £20,185 through The Big Give match-funding), Cycling for All, Vote Bike (reaching four times as many candidates than ever before), and Spaces to Breathe, which led to eight modal filters being made permanent. Mill Road bridge was reopened to motor traffic, alas, but changes are on the table again for 2022, when we also have to push for Tranche 2 schemes to move ahead before local authorities miss their chance of funding. The Save Our Cycles campaign has also been a major focus.

The formal proceedings began at 2.30pm and the 2021 minutes were passed as correct. Robin began his review of 2021 by saying how proud he was of the staff, as 2021 had seemed to him even more difficult than 2020. The opening of Phase 1 of the Chisholm Trail really was a big deal; Histon Road has also been transformed, with the fantastic CYCLOPS junction and other improvements. His highest priority was the Safer Junctions campaign, especially at the Addenbrooke’s roundabout. County council policy on junctions is shifting away from refusing to touch car capacity to counting the flows of people rather than cars. The Milton Road project should start in 2022 and consultation has just finished on Newmarket Road, for which we produced suggested responses. Changes to the Highway Code are good, setting out a clear hierarchy of users, and the creation of Active Travel England under Chris Boardman will also be positive, with LTN 1/20 required for all highway schemes. Discussion of incorporated status for the campaign is moving ahead, with term limits for trustees now being looked at. We also need more, and more diverse, trustees, so should look at the barriers to people putting themselves forward, perhaps requiring elections only for a second term in the post.

The treasurer’s report followed, with Peter looking at figures from the two previous years – our income was up on both 2019 and 2020, spending was above 2019 and well above 2020, and reserves were above 2019’s but down on 2020’s, with Rosie’s hours being increased and funds set aside for the new infrastructure campaigner. Questions followed from members including Gabriel and Bev, before Roxanne presented Camcycle’s vision for 2022 with four main objectives: to work at a regional level, to run agenda-setting campaigns, to work with communities and spread the joy of cycling for all, and to build a sustainable organisation.

After a twenty-minute break, our guest speaker was Adam Tranter, Coventry’s Bicycle Mayor turned Cycling and Walking Commissioner for the West Midlands. His presentation took us from his childhood in Coventry and cycle racing across the country, to writing for magazines such as Cycling Weekly and creating Fusion Media in 2008 – at about the time that he had children and began to see a bigger picture of how cycling can change cities and lives. He began the #BikeIsBest campaign as a response to the first lockdown, and has now moved from an independent rôle as Bicycle Mayor (providing cover for councillors, but also holding them to account) to a more structured one as Cycling and Walking Commissioner, where he follows Chris Boardman’s advice that it’s vital to be seen to be speaking for the Mayor and to have access to actual cash. The West Midlands has been awarded £1 billion by the government for a green transport revolution.

Adam has also learnt to concentrate on persuading the people in the middle ground, not the ones in the more entrenched positions. It’s about communities, not just about cycling. Change is never easy, but we would never go back to life without sewers or with smoking in pubs; it’s best to start with something like Sunday Open Streets once a year, then once a month, then every week, then maybe all the time. Bikelash is not a new thing, and won’t go away; it’s important to adapt quickly and to seek the middle ground. About six people in ten are in favour of pro-cycling measures, with only one in ten against.

Adam advised that our Mayor Dr Nik Johnson should look for a relationship-builder and communicator in his promised Cycling and Walking Commissioner, and said that more women are needed across the world of transport planning. When asked how to start the first conversation and get through to people, he said that local journalists are important (take them for a bike ride), and going door to door is wonderful, but very time-consuming. To hear more from him, listen to the Streets Ahead podcast (with Laura Laker and Ned Boulting), which came highly recommended by Camcycle members. 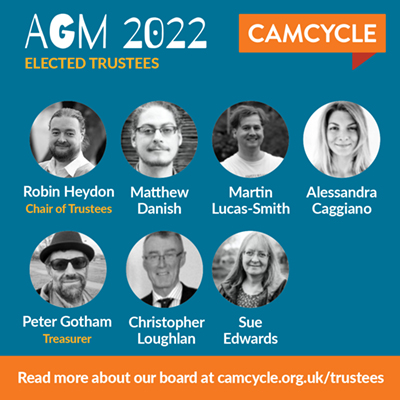 All those who stood for election in 2022 were elected. You can find out more about our trustees at camcycle.org.uk/trustees.

A huge thank you to our outgoing trustees Alec Seaman, Finlay Knops-Mckim and Tom McKeown. Tom had been a trustee since 2014, supporting us as we began to employ staff and helping with key projects such as manifesto development and the building of our new stall bike, in addition to active campaigning for families and for better infrastructure in Histon & Impington.

We have a few posts available on our board and intend to co-opt additional trustees throughout the year. Please get in touch if you’d like to know more or visit camcycle.org.uk/becomeatrustee 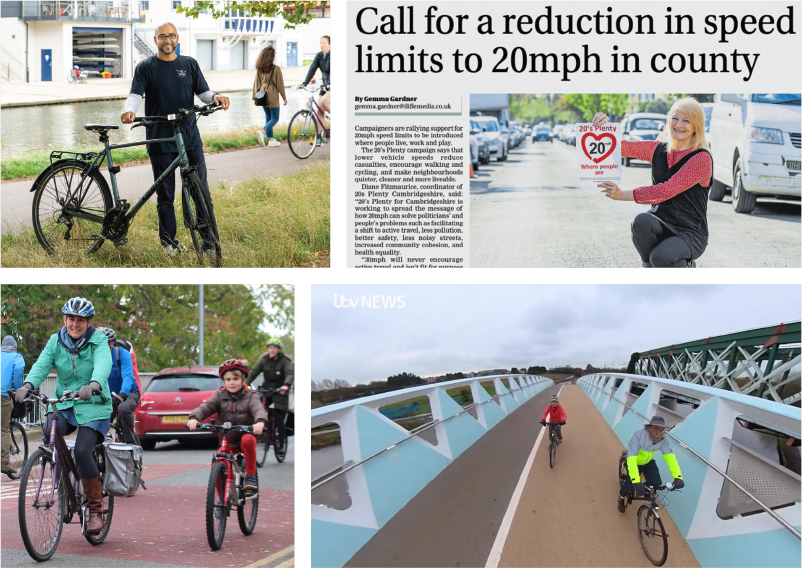 Partner of the year: Omar Terywall and the volunteers of the Stolen Bikes in Cambridge Facebook page
For working tirelessly to tackle cycle theft and reuniting over 200 bikes with their owners.

Public Officer of the year: Patrick Joyce
For bringing the Chisholm Trail to reality.

Magazine photo of the year: Jeremy Peters
For the image of over 100 riders making their way up Mill Road during our Pedal on COP 26 ride (Magazine 153, Winter 2021/22).

Magazine article of the year: Jamie Wood
For ‘My Barriers to Cycling’ in the Summer 2021 issue, sharing experiences as a cyclist and campaigner that will help us work for more inclusive cycle facilities in Cambridgeshire.

Campaign of the year: 20s Plenty Cambridgeshire
Diane FitzMaurice’s local branch of the national 20s Plenty campaign has driven change on safer streets across the county.

Newcomer of the year: Margaret Winchcomb
For a range of volunteer contributions from article-writing to relationship-building with stakeholders in the Arbury area.

Campaigner of the year: Rosalind Lund
For campaigning that makes an impact and embraces our values: from leaflet delivery to sharing positive messages in the media.

Volunteer of the year: Wookey
For a variety of volunteer roles including patiently reaching out to new communities on the NextDoor neighbourhood app.

Lifetime Achievement Award: Jim Chisholm
For the Chisholm Trail and over two decades of cycle campaigning on changes that benefit us all and the many generations to come.