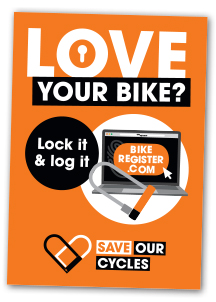 Cycle theft in Cambridge remains a huge and frustrating problem. While the crime statistics show a decline in cycle theft reports compared to 2019 levels, anecdotally we seem to be hearing more and more about cycle theft and the impact it is having on people’s lives and travel choices. Cambridge residents are fed up with this crime and the lack of effective action.

I have been participating in two cycle theft stakeholder groups throughout the pandemic. One is looking at the issue of cycle theft across the city and the other specifically targets the Cambridge CyclePoint.

These groups have been great at opening up lines of communication between the various stakeholders with a role in tackling cycle theft.

I think a lack of joined-up thinking and communication has been a significant contributor to the escalating problem, and it is good to see some improvement at last. We have three areas that we are looking at: education, infrastructure and enforcement.

Education is the area where Camcycle has been able to have the most immediate impact. We’ve produced and distributed our ‘Save our Cycles’ materials online and in print to colleges, schools, workplaces etc., encouraging people to register their bikes and lock them securely. But as many in Cambridge will know from personal experience, even the best locks can be no match for determined thieves, poor cycle parking infrastructure and an under-resourced police service.

Infrastructure is looking at the quality of cycle parking, security, location, CCTV coverage etc. We’ve been auditing the city’s cycle parking provision and CCTV coverage, looking for improvement opportunities and reviewing relevant policies. Funding will most likely need to be found to pay for various upgrades.

With regards to enforcement, we’ve seen some changes in how the police deal with cycle theft. There has been more use of Criminal Behaviour Orders (CBOs) which will help the police to deal with repeat offenders and allow them to take action without needing to go through the resource-intensive work of proving the possession of a stolen bike. For example, a CBO may be breached if the person is in possession of a bike without proof of ownership. I’ve been told the courts will take breaches of CBOs very seriously. I have composed on behalf of Camcycle (and all Cambridge cyclists) a victim impact statement explaining the impact that cycle theft has on individuals and the community. This has been used in court by the police and I have been told it has had an influence on sentencing decisions. The big challenge with enforcement is ensuring cycle theft reports are pursued beyond the initial reporting stage and, when police do take a report forward, CCTV footage is requested and then provided to the police in a useful and timely way. There are some police officers who are really keen to deal effectively with cycle theft, but I worry the overall culture is not there to support them. This is something the Police and Crime Commissioner must address.

The potential of CCTV

A recent highlight from my cycle theft work was visiting the council’s CCTV hub. I was so impressed by the team at the hub and their detailed knowledge of cycle theft hot spots, known cycle thieves and how to spot a theft in action. If a theft is captured by CCTV the footage is usually of high quality and the correct clip is easy to find and edit in a timely manner, with little effort required from the police. So, once and for all, let’s end the myth of CCTV being too much work for the police. There is a great resource at the CCTV hub that is perhaps not being used to best effect (there is that lack of joined-up thinking again). But we have some great ideas that I hope can be implemented soon. Thank you to the CCTV team for allowing us such an informative visit.

I can’t report on very much about the Greater Anglia-managed CyclePoint yet, but I can say that attempts at improving the process to ensure CCTV footage is made available for the investigation of theft have thus far been utterly frustrating and futile and not the fault of the police or local station staff. I have reason to believe there may be some better news in our next edition.