Camcycle believes that people in the Cambridge region need spaces to breathe to allow them to stay safe, happy and healthy. This campaign works to achieve more safe space for cycling and walking during the coronavirus pandemic and beyond, so that more people feel able to choose active travel for everyday journeys, or spend time outdoors in the places where they live. Find out more at camcycle.org.uk/spacestobreathe

Thank you everyone who has helped us campaign for Spaces to Breathe over the last 18 months: sharing suggestions for improvements, responding to consultations, counting traffic, delivering leaflets, writing to local newspapers and showing your support on social media.

We were delighted that the county council’s Highways & Transport Committee unanimously agreed to make eight experimental transport schemes permanent. The measures, installed as part of the government’s Active Travel Fund which was launched during the Covid-19 pandemic, were intended to help more people walk and cycle safely for their everyday journeys.

Cllr Alex Beckett said the schemes, six of which were in Cambridge city, were well-received and had had a ‘transformational effect’. Kirsty Howarth, speaking on behalf of 50 residents of Luard Road who wanted to keep the modal filter on that street, said that a recent traffic survey carried out by residents showed that the daily number of cycle trips had increased by 74%. Between 8am and 6pm, they recorded 1,218 people cycling on Luard Road and 2,198 people walking.

Our own analysis of the Greater Cambridge Partnership (GCP) data also demonstrated the success of the city schemes. Over 80% of those travelling in Carlyle Road, Silver Street and Luard Road are now doing so on foot or by cycle, and daily levels of cycling in Carlyle Road are approaching those on popular routes such as the Riverside bridge. According to the government’s cycle infrastructure standards, LTN 1/20, the level of motor traffic on Bateman Street now makes it an appropriate route for all types of cyclist, whereas the 4000+ vehicle movements observed in 2018 created a barrier to many potential riders.

The two schemes outside the city were also supported by their local councillors. Cllr Ros Hathorn, quoted in the county’s report, said she had heard many positive comments about the experimental one-way system on Bell Hill in Histon. It had ‘given children and young people more independence’ and opened up a safe route to a new local community nature reserve. Cllr Piers Coutts, representing Ely South, said that he supported the proposal to prohibit parking on Station Road, Ely and that the benefits to safe cycling outweighed the objections received.

Cllr Mark Howell, backing up a point made by national government, said that low-traffic schemes would always face some opposition, but the county had to be bold. He said: ‘On the evidence [these schemes] have proven to be very successful, but we must be prepared to take these risks at the beginning and go for them. We are going to get criticism, but we must accept that. My primary issue here is the safety of the public.’

Unanimous call to speed up Mill Road consultation and improvements 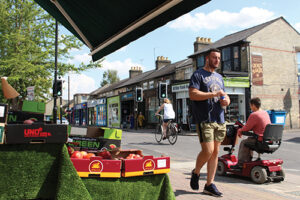 More good news from the county council’s Highways Committee. Councillors were due to approve officers’ recommendations that the consultation on Mill Road and delivery of the scheme should be delegated to the Greater Cambridge Partnership (GCP). This recommendation was passed with an additional amendment that the GCP should expedite the public consultation, a proposal welcomed on all sides. GCP Transport Director Peter Blake agreed to accept this challenge: a new consultation is expected early in the new year. 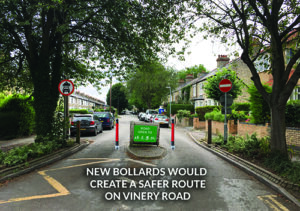 With the first phase of experimental schemes now to be made permanent, local campaigners are eagerly awaiting the results of the consultation on phase two measures that closed in August. Officers promised this would be discussed with councillors at an upcoming members’ working group and released for public viewing later in the year. The county council is also working on a revised hierarchy of roads, which will inform its decision on which schemes to take forward.

We have recently been alerted to a plan by the county council that will cut off access to the popular Windsor Road / Warwick Road cycle route adjacent to the Mayfield Primary School. This route is currently very popular with parents and children going to the school as well as being part of the larger Cambridge cycle route network.
The scheme will remove the dropped kerb that people currently use to access the passageway and instead replace it with some fenced off green space. The only accesses to the passageway that will remain are some narrow pedestrian crossings well off to the side of the junction that will entail negotiating 90-degree turns and narrow pavements shared with pedestrians. 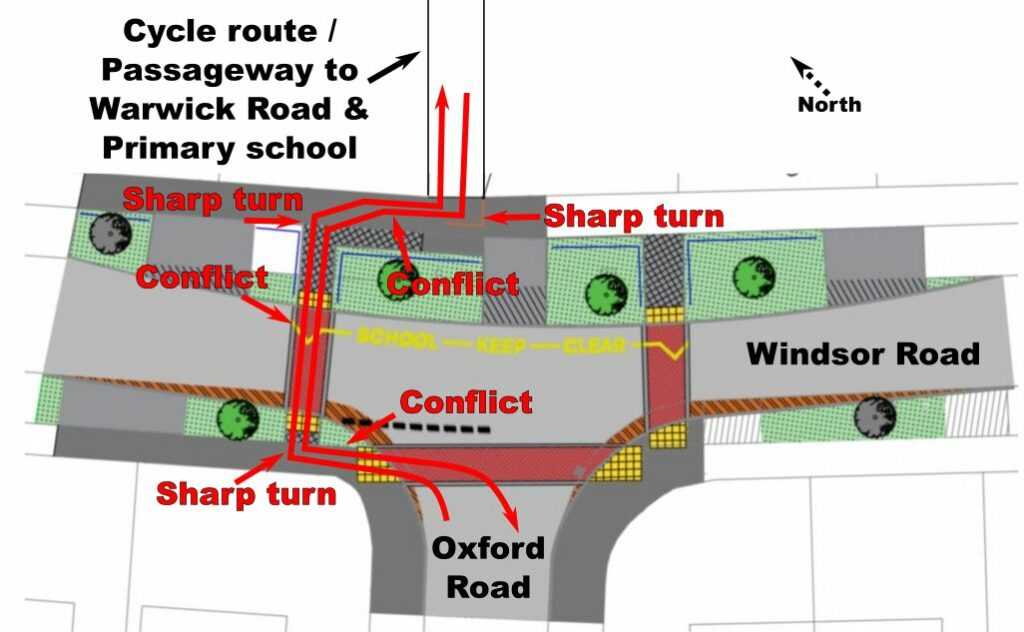 This means that people who are using tricycles, tandem cycles, cargo cycles, disability-adapted cycles, or towing trailers of some sort will effectively be excluded from using the cycle route. Needless to say, the county has not used Local Transport Note (LTN) 1/20 in the design of this scheme and the changes were not consulted on with the vast majority of current users, many of whom use larger cycles or child-trailers.

Plans are moving fast and the intention is to build in the new year. It is vital that space for walking and cycling for all ages and abilities is maintained on this route and we’ll be working hard on this campaign over the next few weeks.

Read more about this issue on our blog.