This summer the Greater Cambridge Partnership launched 12 Greenway ‘tube’ maps showing the range of planned active travel routes round Cambridge. Project Manager Simon Manville explains how the system works and how it will develop.

Work has now started on designing and building twelve Greater Cambridge Greenways, totalling 75 miles of cycleway. Within a few years you’ll be able to use these routes to get from St Ives to Linton (21 miles), Royston to Waterbeach (16 miles) and Comberton to Swaffham Prior (14 miles). You’ll be able to use the Chisholm Trail and other routes to make connections through Cambridge, and there will be links to railway stations (existing and planned), travel hubs, Park&Ride sites, science parks, business parks, employment centres, leisure facilities, heritage sites and of course central Cambridge.

We’ve spent time talking to local communities to find out what they need from their Greenways. It’s been important to make sure that all Greenway users are considered, whether they’re wheelchair users, walkers, horse riders or cyclists, and whether they’re going to work, school, college, shopping or off to have a great day out. 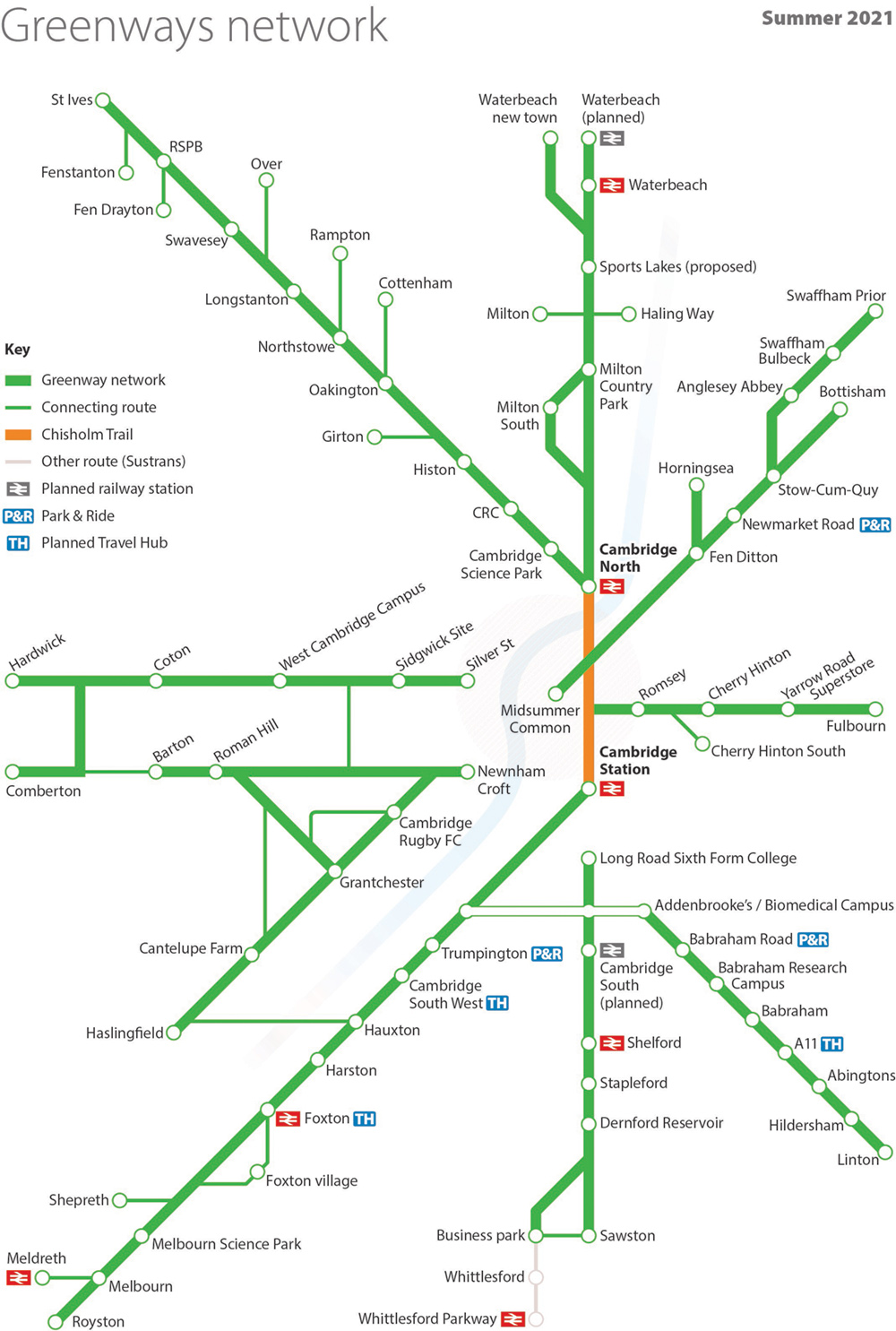 To make sure connections are maximised, the Greenways don’t just form the traditional spokes of a wheel, but, where possible, interlink and reach out to other communities. All in all, 48 villages and residential areas will have access to a Greenway, and this number may grow in the future as the network expands. The map shows how the new network enables safe journeys to be made across the whole area.

We’ve now appointed consultants and have started the preliminary design stage on each Greenway. The twelve individual ‘tube’ maps show how each Greenway reaches Cambridge, how they intersect with other Greenways, the Chisholm Trail and the river. What’s more, they show how long it could take to get from one location to the next (on a cycle) so you can calculate your approximate journey times. The Swaffhams Greenway map is shown here as an example. 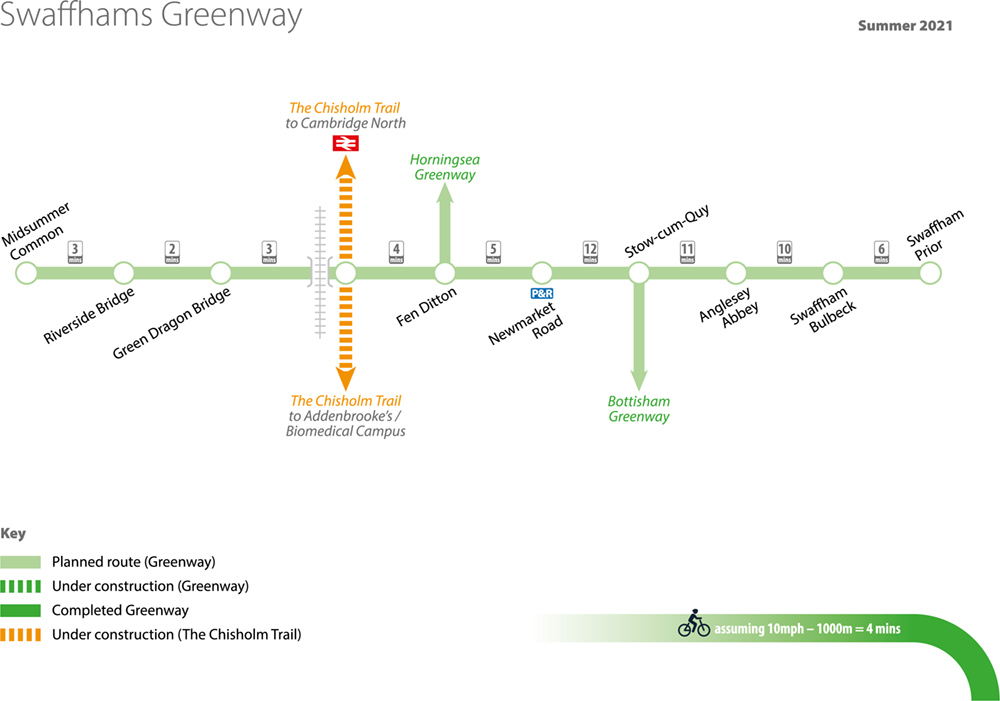 Each individual map will be updated regularly as sections move into construction and completion. We’ll be working in the most cost-effective way, so you’ll notice that some sections are completed before others. We’ll be looking at road crossings, lighting and other safety measures as well as biodiversity in verge and boundary planting.

Before work on the main Greenways gets started, we’ve produced some ‘quick wins’ – comparatively straightforward links between Greenway routes, spurs to villages and communities and improvements within villages. 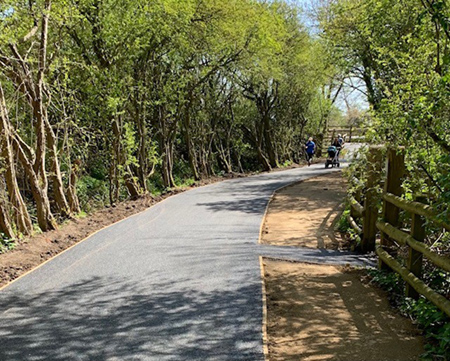 Our most recent quick win, earlier in 2021, was on what will be the Comberton Greenway linking the village to Hardwick, Coton, the West Cambridge Campus, Eddington and the city. We widened a 300m stretch of path and verge by the M11 bridleway bridge at Coton to help provide smoother and safer active travel journeys between Coton and the city. A further 60 tonnes of topsoil were rolled onto the verge to make the route suitable for horse riding, and we spread wildflower seed mixes to encourage pollinating insects to thrive. We want all users to be able to benefit from our Greenways: wheels, feet and hooves.

The work, which was completed in April, was commissioned by the GCP in partnership with Highways England which recently carried out repairs to the bridge.

History of the Greenways

A Greenway is a 21st-century way of encouraging active travel into and around cities. There are Greenways in China, Australia, Canada, the United States, New Zealand and across Europe. Sustrans has been one of the driving forces behind Greenways across the UK since 2013 (see its ‘Greener Greenways’ project for more details).

However, Greenways have been around for a lot longer than that – and of course, in the past, all travel was ‘active’. The term ‘Greenways’ traditionally refers to ancient pathways dating back to Neolithic times, some 5,000 years ago. The 110-mile Icknield Way is probably pre-Roman and is one of the oldest roads in Great Britain. In Roman times it was linked to Cambridge via Worsted Street. More recently, fen droves provided transport between drained fens and the markets of Cambridge. A network of pathways in our area has therefore existed for centuries, if not millennia, and over recent decades sections of these have been updated for walkers, cyclists and horse riders.

The Greater Cambridge Partnership project kicked off in 2016 with a report by Nigel Brigham, formerly of Sustrans. The report analysed existing pathways and looked at how each Greenway could be developed. You can view this report on the Greenways page of the GCP website.

We are often asked why Greenways take such a long time to develop. The Nigel Brigham report states: ‘Whilst Greenways are often relatively simple pieces of infrastructure, the development of high-quality Greenways is not simple. In addition to funding there are three major challenges that need to be addressed:

Post-report we started investigating. Who owned which parcel of land? Where was there subsidence? Where were floods likely (St Ives to Swavesey!)? What about trees and tree roots? What was the geology of each area and what was the natural vegetation? How much wider could an existing pathway be and how could it be made suitable for all Greenway users? Where are major road crossings? How safe are existing underpasses and how can lighting be improved without causing light pollution? Our consultants will have to consider these points in more detail at the planning stage, but an overview was needed.

We have to make sure that every Greenway serves the communities along its route. During 2017 and 2018 we held engagement meetings in village halls with maps, photos and lots of staff on hand to answer questions. Next, in 2019, came the formal consultations, organised in tandem with reports by design consultants 5th Studio (see individual Greenway webpages for details). We were extremely pleased by the outcome of the consultations. There was significant approval of the concept, and over 80% said they would use their local Greenway.

The next stage was to present reports to the Greater Cambridge Partnership Executive Board. Over the course of the four meetings, in 2020, 11 of the 12 Greenways were approved (the twelfth one, Linton, forms part of the Cambridge South Eastern Transport project).

Now that delivery consultants have been appointed – Atkins for the North and South routes and WSP for the East and West ones – detailed design can start. The projects will not be completed in a linear fashion, but will be programmed by the consultants to ensure an efficient delivery approach.

Once detailed planning starts, we’ll be working with parish councils, local communities, schools, businesses and science parks to bring each Greenway to life. Surfacing and planting will be carefully chosen for each setting, and there will be opportunities to individualise each route.

This is just the start. We’ll carry on talking to users and prospective users, looking at ways to make each Greenway special and making sure that funding exists to keep the routes in first-class condition. We hope to be able to add to the network to make active travel easier for everyone.

Greenways are a great way to get to work/study and to explore our varied local countryside, and we hope people will use this active travel network for generations to come.

Read more about the project on the Greater Cambridge Partnership website.
Camcycle has campaigned for better village links for over 25 years. Find some examples at camcycle.org.uk/vision2016/villages and camcycle.org.uk/blog/tag/greenways