Omar Terywall gained media fame and personal satisfaction from helping cycle theft victims reclaim their bikes. Here he explains how by helping others he found he had helped himself too. 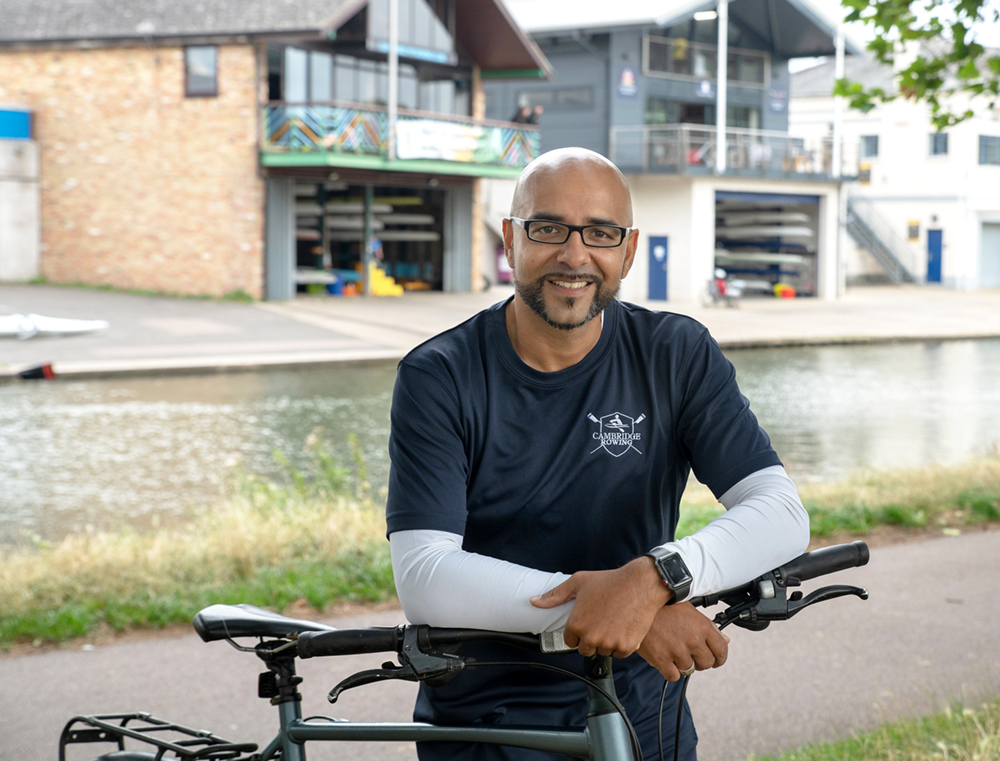 I’ve lived in Cambridge for over 25 years now and am very proud of everything that our city has to offer. Cycling is often the best way to get around and having lived close to the river for most of my time here, I have relied quite heavily on my bike. As a family, we have enjoyed many bike rides together and discovered gems around the city that we would never had come across by car or by walking.

Up until recently, I ran a direct marketing company, but both GDPR and the pandemic affected my business. In November 2019 I received a call from one of my biggest Asian event organisers asking to hold/postpone all their marketing campaigns because, in their words, ‘there’s something going on in this part of the world where we can’t have any mass gatherings of any sort…’ I spent the next few months putting together a new business venture that I had been planning many months earlier. As the Lower Boats Captain at my rowing club, over the years I have introduced many people to rowing – and I wanted to make it more accessible to the wider public. So, I launched ‘Cambridge Rowing Experience’, aimed at complete beginners who simply want to try rowing without being tied down to a club or needing to be affiliated to a university. A marketing company may have had a limited shelf life but this was a brand new tourist attraction in a city that’s never short of tourists – or so we all thought. I was fortunate enough to get a number of advance corporate bookings for team-building days, but then Covid came along and the country went into lockdown. Everything needed to be refunded and – slowly, slowly – we started to hit financial difficulties.

Depression hit me, but one thing got me through: the Stolen Bikes in Cambridge Facebook page I’d set up a few months earlier

Depression hit me, but one thing got me through: the Stolen Bikes in Cambridge Facebook page I’d set up a few months earlier. Since September 2019, I’m proud to say that I, along with a team of other volunteers, have reunited around 200 bikes with their rightful owners, often after the police have closed their cases. The satisfaction of tracking down and recovering a cycle was so rewarding that it helped me overcome my personal difficulties. More than ever, I’m convinced that helping others is the way we help ourselves.

It all started when I came across a post on a Cambridge selling page on Facebook asking for help. The individual had posted pictures of two bikes that had been stolen from their garage and was asking the public to keep an eye out. Moments later, I happened to see an identical-looking bike advertised on a different selling group at just a fraction of the market value. I contacted the victim via Messenger and she instantly recognised it as one of hers. In the meantime, I messaged the seller directly and arranged a time to meet at their house. I then passed on the address and contact information to the victim who immediately passed it onto the police. Sadly, the response from the police was that they had no one who could go to the address for a few weeks. Given that the bike was being sold at a fraction of what it was worth, I knew that time was of the essence, so I went to the address as agreed – and got the bike back. Some months later, I spotted someone cycling along with a £2,800 electric bike on his shoulder. As impressive as that balancing act was, it was pretty clear that it didn’t belong to him. Long story short, I stopped my car in front of him and got the bike back. This was reported in the Cambridge News; when I proudly shared it on social media, several friends suggested I set up a page to help recover stolen bikes – and that’s where Stolen Bikes in Cambridge was born.

Harnessing the power of the community

The main aim of the Facebook page was to create a place for victims to not only post their bike details, but to engage with other members of the community in the hope that they could help them in one way or another. Since I started Stolen Bikes in Cambridge, I have come across countless victims who have lost all hope in getting their cycles back. People often don’t appreciate that when a bike is stolen the victim often loses much more than just their property. One person who had their cycle stolen from Addenbrooke’s said the theft had cost them their job because they could no longer get to work. They became depressed and eventually lost their home. This is an unusual case, but often the mental health impact of a theft can be considerable.

Another victim lost his bike on the last night of a cycle tour around the UK. The cycle had been his faithful companion for six weeks and he was devastated by the theft and unable to complete his journey. In reaching out to our group he found a community of people who were kind and thoughtful; he said this made the loss less painful. Eventually his bike was found in Essex after being tracked down via eBay. The police did get involved in the case, but no arrests were made.

I don’t like to berate the police because I’m well aware that they are massively under-resourced. However, there is so much that they can do. What our page has demonstrated, countless times, is that there are people out there who are more than happy to help in one way or another – many of whom would happily assist the police. This would require a vetting system that’s been spoken about on a number of occasions, but nothing ever seems to materialise. There are an equal number of posts from people who have found ‘abandoned’ bikes – many of which are clearly stolen and dumped. If the police were to share ‘non-sensitive information’ (i.e. make, model, colour and date of thefts) we could very easily double the number of successes.

What our page has demonstrated, countless times, is that there are people out there who are more than happy to help

Stolen Bikes now has 8,500 followers and it can be very time-consuming and difficult to manage the page. I have a fantastic team of volunteers who play a huge part in its success. My moderators help me keep the page clean (which is a full-time job in itself!), approve posts and filter member requests. Other people volunteer their time in capturing data which has been used by local and international media, councillors and developers.

I’m proud to say that I have also worked quite closely with Camcycle. It became apparent very early on that one of the biggest issues that we have in tackling bike theft is that bike owners aren’t aware that their bikes have unique serial or frame numbers. Camcycle is working hard to raise awareness of the issue of cycle theft and encouraging cycle owners across the city to register their bikes on Bike Register.

Visit the Stolen Bikes in Cambridge Facebook group.
Find information and resources from Camcycle’s Save Our Cycles campaign.