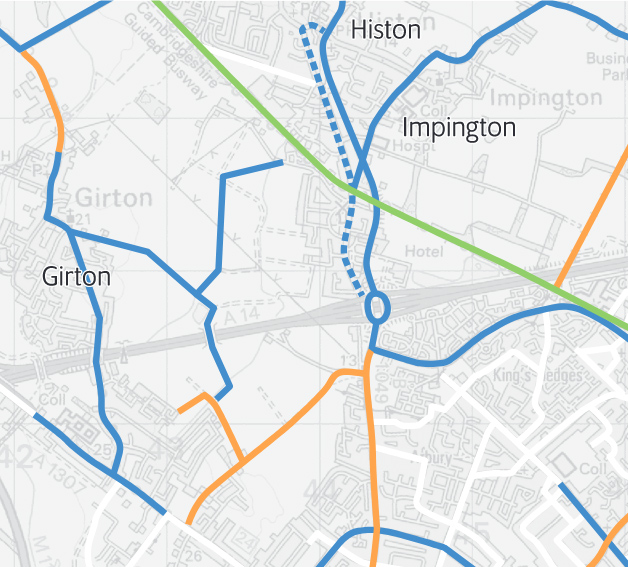 In addition to the campaign to remove the barriers by the new A14 active travel bridges, Camcycle has been encouraging members and supporters to have their say on two consultations from Cambridgeshire County Council.

The first sought views on the county’s Local Cycling and Walking Infrastructure Plan (LCWIP, see map extract) which will help the council select the most important areas to improve in each district of Cambridgeshire. We particularly wanted our supporters to add their ideas to the interactive map and make sure important, but overlooked, walking and cycling links were included. The second considered Tranche 2 measures for the Active Travel Fund.

A consultation on the next Local Plan begins on 1 November and First Proposals have been published for consideration by councillors at both Cambridge City Council and South Cambridgeshire District Council (SCDC).

In our Spring 2020 issue, we highlighted the need for generous, secure cycle parking and we are pleased to see that Cllr Hathorn picked up this issue in a recent meeting on the North East Cambridge development. Meanwhile, the joint response from the city council and SCDC to the LCWIP supports ‘that the design of new cycle routes will have regard to current guidance, especially the Department for Transport’s LTN 1/20 Cycle Infrastructure Design and ‘Gear Change’ document (2020)’.

In June, Camcycle and other local groups supported a petition from Smarter Cambridge Transport calling on the Greater Cambridge Partnership to change its spending priorities from controversial busways and car parks to walking, cycling and bus schemes. These could be delivered more quickly and provide greater benefit for more people with less environmental damage. However, the GCP has chosen to press ahead with its expensive busway schemes, which will take up much of its budget for transport.

Faster action for cycling might be achieved through the ‘Cycling Plus’ scheme (allocating £20m to two or three ‘missing link’ routes in Cambridge) and the City Access scheme, which aims to reduce traffic in the city. A consultation on City Access, which includes plans for new bus services and a road or parking charge, is expected later this year.

Cambridgeshire and Peterborough was the only combined authority in the country to be told that its grant from the active travel Capability Fund was paused until the Department for Transport ‘can be sure of the authority’s commitment to active travel’. Mayor Dr Nik Johnson met with Transport Minister Chris Heaton-Harris in September and it was made clear that cycling and walking schemes such as the Mill Road bus gate should not be removed without proper evidence.

The Combined Authority is working on an update to the Local Transport Plan (renamed the ‘Local Transport and Connectivity Plan’) which seeks to integrate with the work of the Independent Commission on Climate and data on transport changes during the pandemic. The Voi e-bike and e-scooter trial will be extended until March 2022 and an application for funding for Active Travel Tranche 3 has been submitted to the Department for Transport.