In 1961 the Cambridge Daily News published an article ‘New Police Attack on Cambridge Cycle Thieves’ (the photo was tweeted by Antony Carpen on 17 April). The article announced an ‘all-out attack on local cycle thieves’ by Cambridge City Police who planned to apply pink labels on unlocked bikes advising owners that they should always lock their bikes and should record their frame number to increase the chance of recovering their machine.

It feels like not much has changed in 60 years. Cycle theft is still a huge problem in Cambridge. Bikes are still being stolen (often when not locked securely) and police are struggling, in the absence of frame number records, to return recovered bikes to their owners. 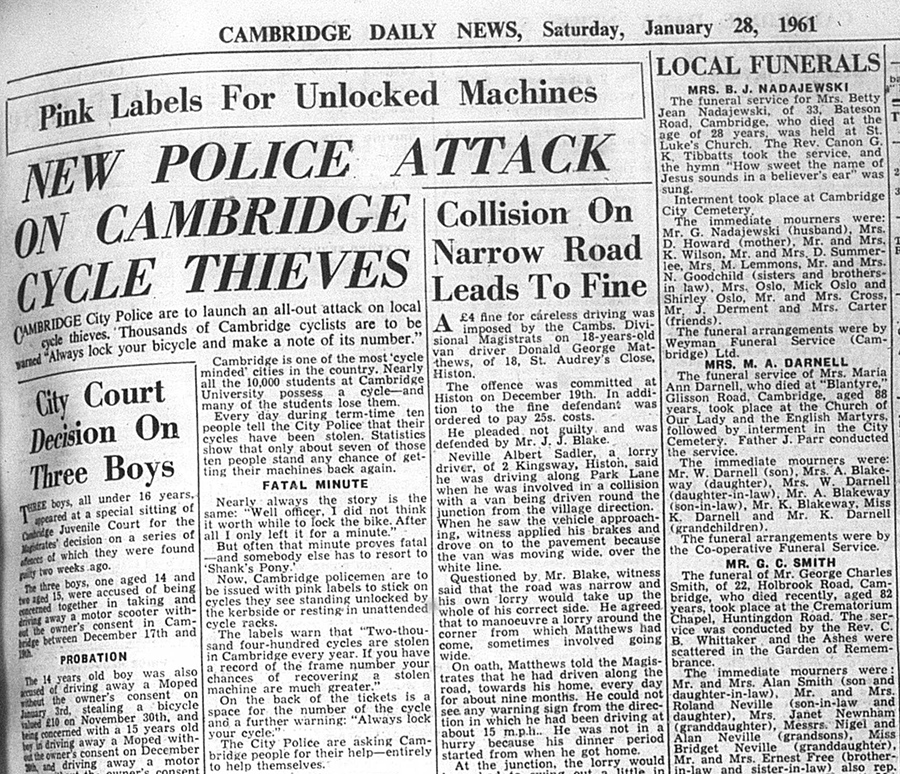 I’ve been campaigning for more action on cycle theft in Cambridge for six years, and it has often been an exercise in frustration. Cycle theft is the number one crime in Cambridge, costing residents upwards of £1.5 million per year. Yet this crime has often felt like a low priority crime of little significance. Cycle crime should not be prioritised based on the perceived low value of the stolen machine, it should be measured by the impact on individuals and society. The cost of cycle theft can be huge.

Through my work with Camcycle and involvement in the ‘Stolen Bikes in Cambridge’ Facebook group I’ve heard stories about people who have lost their jobs because the theft of their bikes meant they could no longer cycle to work. Some people have been unable to make it to interviews without their means of transport and without a job they have been unable to purchase a replacement bike. There are entire families that have given up cycling and the benefits of fitness, fun and independence because they can no longer risk losing all of their bikes yet another time. Others have been stranded late at night and unable to get home after their bike has disappeared. For me personally, there are places I have stopped cycling to as I feel the risk of losing my bike is too high.

The social cost of cycle theft is high too. More people cycling will help us combat the crises of climate change, air pollution, congestion, the pandemic and poor health due to inactivity. We should be doing everything we can to encourage more cycling, but there are too many barriers including the high risk of cycle theft.

After six years I am finally seeing some coordinated action on cycle theft from a group of committed stakeholders including police, councillors, council officers, the business community, developers and station operators. We’re working on improved enforcement, infrastructure and education. But there is a clear issue preventing our success – the lack of bike registrations and the lack of frame numbers provided to police in crime reports.

The police cannot prove a crime and cannot reunite a stolen bike with its owner if they lack the crucial piece of evidence that can prove a bike is stolen. Too many owners fail to record their frame number or provide it in a police report, thus rendering their report close to useless. Using a bike registration site could also dissuade thieves. Bike owners can make their bike even less attractive to thieves by marking their bike with tamper-proof stickers or etched labels to show that the bike is registered. If potential thieves can see that a bike is registered, they know there is a higher risk of being caught with stolen property or of not being able to sell the bike. The police also check these registration sites when they recover a bike.

Camcycle’s ‘Save our Cycles’ campaign calls on the public to play their part too by logging their frame numbers and locking their bikes.

Just as in 1961, the Cambridge Police (and now Camcycle) are asking Cambridge people for their help – entirely to help themselves. We want to see a massive increase in bike registrations which would make more bikes ‘too hot to handle’ by thieves, enable the police to prove more crimes and help individuals to be reunited with their stolen bikes. Bikeregister.com is recommended for registration.

Roxanne De Beaux is Camcycle’s Executive Director. This article was originally published on 26 May, 2021, in the Cambridge Independent, which features a monthly column by a member of the Camcycle team.

Find more information and download resources from our Save Our Cycles campaign page. We have also updated our guidance on keeping your cycle safe at camcycle.org.uk/cycletheft