Community e-bikes help people start cycling and connect up towns and villages. We find out more about the growth of local schemes run in collaboration with Cambridge Electric Transport.

We can help to build a connected, active, emission-free and healthy future for our towns and villages – and achieve our carbon-zero targets – through shared community e-bikes. That’s the vision of Cambridge Electric Transport (CET), a bike-share operator which began providing services in Cambridge in 2018. With support and funding from Cambridgeshire County Council and the South Cambridgeshire Zero Carbon Communities Fund (ZCCF), it has piloted its bizbike community e-bike service in Northstowe and Teversham, offering low hire rates for residents. The take-up since launching in January has shown that there is growing demand – especially as the weather improves. 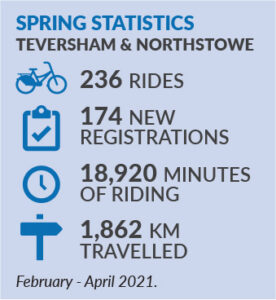 Sean Moroney, founder and CEO of CET, now wants to replicate the service across the entire county, starting with other villages in the area. ZCCF is funding an expansion of the bizbike service to include the Abingtons, and the Greater Cambridge Partnership is considering funding pilot services in two further villages, possibly Bar Hill and Foxton. CET has applied for start-up funding from the Cambridgeshire & Peterborough Combined Authority to expand services to Peterborough, Ely and all nine market towns in the county. This would enable communities to reduce their carbon footprint and could make Cambridgeshire the best-connected green transport county in the UK.

In parallel with this work to provide bike-share services to villages and towns, CET has formed a partnership with The Big Issue and ShareBike of Norway to launch a public e-bike share service for the Greater Cambridge area, to be launched in August. The Big Issue has adopted bike share as its major new post-lockdown initiative to create jobs for the unemployed and homeless.

Alongside this, CET is partnering with the Medical Research Council, Cambridge University and Living Sport to undertake a research project this year to measure the health benefits of community bike availability.

Read more about the community e-bikes at cambridgeelectrictransport.co.uk/electric-bike

Do shared bikes encourage a switch to more cycling? 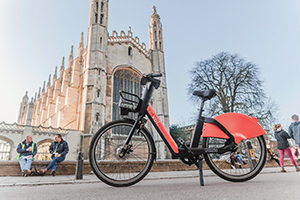 In March, the total number of uses of Santander Cycles (‘Boris bikes’) in London reached 100 million. Commenting on the scheme, which launched in 2010, Nick Chamberlain from British Cycling said: ‘The popularity of cycle hire schemes is reflective of a new pattern of urban life, with many turning away from outright ownership of modes of transport and turning to hiring cycles, scooters and other modes to avoid the burden of storage and ongoing maintenance’.

While some may argue that many users also avoid the burden of parking considerately to prevent obstruction to pavement users, it’s clear that shared bike schemes are here to stay. Cambridge has gone from the free green bikes in the 1990s, through the Ofo and Mobike schemes, and now has Voi e-bikes (also available in Peterborough). Nik Johnson has shown support for further expansion of e-bikes with a proposal for a fleet of ‘Dr Nik’s bikes’ across the county.

At our May monthly meeting, John Hamer told us that 40% of UK users of Voi e-scooters and e-bikes are women, which is a stark contrast to the overall national picture where men make three times as many journeys by bike as women. Research from shared transport charity CoMoUK backs this up: their 2020 survey showed that 44% of bike-share users in the UK are female.

Even more encouragingly, over half of the bike-share users surveyed by ComoUK said that use of a bike-share scheme was their catalyst to get cycling again – 80% who were attracted to share bikes by a promotional scheme (such as that for key workers) during lockdown hadn’t cycled for a year or more and 12% of all users went on to buy their own bike. 29% of users would have driven if a bike share hadn’t been available and 33% have reduced their car use as a result of a bike-share scheme.