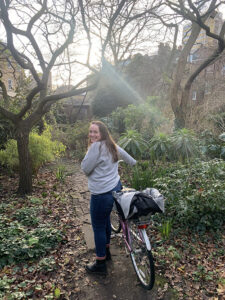 I used to think I wasn’t a typical cyclist. If you’d asked me a year ago, I would have told you that everything about me made me unsuited to riding a bike. First off, I’m incredibly clumsy with terrible balance. My knees are covered in scars from repeatedly tripping over on the street. This clumsiness thwarted my childhood ambitions of riding a bike, ice-skating or roller-blading – leaving the garden shed filled with bits and bobs and my pride shattered on the floor.

I’m also anxious. I’m brilliant at imagining the absolute worst-case-scenario and convincing myself that it’s definitely going to happen. If I try riding a bike I won’t just be a bit wobbly, I’ll fall off. But I won’t just fall off, I’ll fall off in front of Taylor Swift who just happens to be in Brixton and walking down the street at the exact moment I decide it’s time to try riding a bike. Seeing me sprawled on the floor, Taylor will decide that I am definitely Not Cool and she definitely does not want to be my best friend. Nightmare.

But lastly, and probably most importantly, I’m overweight. Depending on how you think about such things you might describe me as mid-size, or plus-size or just straight out fat. This was the thing in the deepest corners of my mind that made me feel most unsuitable for cycling. I was terrified that a bicycle wouldn’t be able to carry my body, that my legs wouldn’t be strong enough to get me where I needed to go, and, most frightening of all, that people would laugh at me for even trying.

A lot of this had to do with the fact that, for the most part, I’d never really seen anyone who looked like me riding a bike. When I look back on my pre-Covid commutes into central London, I remember watching enviously as thinner and stronger bike-commuters lined up at the traffic lights, looking like they were preparing for a battle where the dress code was lycra only. None of the folk I saw riding bikes looked like they’d ever be at risk of a slight wobble, let alone falling off the bike entirely. And then there were the women I saw cycling in films. From Anne Hathaway in One Day to Meg Ryan in City of Angels – all these women cyclists had one thing in common: they were hit by a lorry while riding their bike and died at the end. Sorry: did I forget to mention there was a spoiler alert on this one? Everywhere I looked, all the signs were telling me that cycling wasn’t for me. And for the most part I was okay with that.

But then the pandemic hit. All of a sudden the streets were quiet and traffic-free for the first time since I’d arrived in London five years earlier. And every day, when I went for my government-mandated 60-minute walk around the neighbourhood, I started to see something strange. Suddenly there were all these women out and riding bikes – and some of them even looked like me. Some were nursing a takeaway coffee in one hand and wrangling a handlebar in the other, weaving all over the place. Others could barely see beyond the colossal new houseplant spilling over their front basket. Some didn’t look like me, but clearly had bodies that didn’t fit my understanding of what was needed to ride a bike. They were pregnant, or elderly, or somehow managing to cycle with two toddlers in tow. And as the months passed one thought kept growing louder and louder in my mind: if they can do it, why can’t I?

Then, one day, a letter arrived through my letter box. It was from Lambeth Council, and it explained that, to help people get around the neighbourhood on foot and by bike, they were making some changes to local streets to try and reduce the flow of traffic and incentivise people to leave their cars at home. This was the moment. I knew if I didn’t take the leap now, right when my local council was literally changing the roads to make them safer and friendlier for folks like me, then I would never do it. So that afternoon I went to a local bike shop and I bought the first bike I’d ever owned as an adult. Wracking my brain to try and remember everything I’d learned in my Transport for London Cycle Confident course a few years earlier, I rode (and sometimes wheeled) my bike home through the backstreets of West Norwood. Completely coincidently, my new bike perfectly matched the outfit I’d picked out that morning. It was the first sign that this was a match made in heaven.

I knew if I didn’t take the leap when my local council were changing the roads to make them safer, then I’d never do it

From then on my new bike and I were mostly inseparable. It was bumpy at first, as all new relationships are. In the beginning I was terrified – incapable of even riding up and down my street without my partner by my side. But over time my confidence began to build. I still remember the first time I went out for a ride on my own. While my boyfriend was in the shower I thought about how nice it would be if I could get to the shops fast enough to pick up some breakfast croissants before he got out. Remembering my bike, I sprinted down the stairs and was out and back before I’d even realised what I’d done. I’d gone for a ride all on my own. Me! Still as clumsy and anxious and overweight as ever. And without even giving it a second thought.

Now I’ve been cycling for almost nine months and it feels like there’s very little my bike and I couldn’t achieve together. I’m even planning my first ever bike-packing trip for the summer, pandemic allowing. And even though hardly any time has passed, I feel like a totally different person from the woman who thought everything about me made me unsuited to riding a bike. But the reality is, I’m not. I’m exactly the person I thought wasn’t capable. It wasn’t me or my body or my mind that was holding me back from cycling: it was the world around me. It was the stories I’d been told about who cyclists are, it was the way we designed our streets and the fact that we’d allowed cars to dominate them. Now I know that there isn’t such a thing as a typical cyclist, because with a little representation, a lot of encouragement, and the right infrastructure – anyone can ride a bike.

Find out more about Sarah’s road to cycling and her work advocating for active travel by watching the footage from our February monthly meeting.