As one of Cambridge’s friendliest cycling clubs marks its centenary, John Seton and Yasmin Emerson look back at the evolution of the club, along with its changing fashions and campaigns.

CTC Cambridge celebrated its 100th birthday on 11 May 2021, a century after the group’s first ride.

The founding ride set off from Brookside in Cambridge where a plaque on the bench at Hobson’s Conduit head records the occasion. Just as soon as we can we’ll be arranging some events to celebrate 100 years of social cycling: 1921-2021 and we hope some of you will be able to join us.

Who are CTC Cambridge?

We are a group of people who enjoy sociable and non-competitive cycling, spending an afternoon, a whole day and occasionally longer riding together. CTC Cambridge is a local group of Cycling UK, the national cycling charity. It has a long and illustrious history, being founded in 1878 as the Bicycle Touring Club, subsequently re-named the Cyclists’ Touring Club and now as Cycling UK. The Cambridge group was formed in 1921 and has been assembling for rides at Brookside since then. As a club, we are open to everyone with an interest in cycling. Our rides offer an environmentally-friendly and enjoyable way of keeping fit, making friends and exploring some of the country lanes, villages, cafés and pubs in the Cambridge area.

A look back through the archives

This article looks back at some aspects of the history of CTC Cambridge and, in particular, at things that have either changed or stayed the same over 100 years. We’ll focus on three areas: how our cycling club has evolved, the way everyday cycling clothing has changed over the years and at the way some of today’s cycle campaigning issues were already being thought about 100 years ago. We’ve only got limited space and patchy records of the club’s history, so this is very much a snapshot.

We do have a wonderful archive of around 500 glass lantern slides, taken by our former club President, Donnex Claydon, which give us a rich picture of club life in the 1930s. More of these can be seen on our website.

Who rides with CTC Cambridge?

Over the years, the demographic of CTC Cambridge’s active riders has changed. In essence we have grown older as a club. Many of our oldest current riders joined the club as teenagers. Our oldest member who still cycles regularly joined in 1952 – nearly 70 years ago! As recently as the mid-1990s, the club had a ‘youth section’ through which many current members joined us. We don’t know the average age of our current members, but most members these days seem to start riding with us somewhere between their mid-life crisis and retirement.

CTC Cambridge used to organise a lot of longer tours in the UK and abroad. Club members also acted as tour leaders for cycling holidays offered by the national CTC Holidays organisation. In the summer months, hostelling and camping weekends were common, with groups going away for one or two nights most weeks. Members still go on tour all around the world, but tend to do this in small groups rather than on tours organised by the club.

Day rides also tended to be longer in those days, with Sunday rides reaching places like Epsom or (as Heathrow was called) London Airport. Today’s ‘longer’ day rides might reach 30 or 40 miles from Cambridge.

With a greater proportion of members of working age, there used to be more of a focus on weekend rides. The nature of Sundays has also changed. As late as the 1970s, very few shops were open on a Sunday, so for many people it was the one free day of the week for cycling. Nowadays, with more families where two adults work, different activities including shopping compete for the scarce household time budget on Sundays.

All of this means that people may now be free for a shorter period, so we might have time for a five-hour ride rather than an all-day ride. Our rides programme has adapted accordingly, as well as adding more rides that take place within the working week. These are good for the self-employed, as well as the growing proportion of retired riders. A recent innovation was the introduction of a Thursday ride for women. These grew in popularity, and eventually admitted men as well as women, and are now far and away our most popular weekly rides. In normal times, up to 35 people take part in these rides, which have to have two different starting points because of the numbers. The gender balance on our rides has improved since the 1930s, and is now around 60:40 male:female, with a similar balance in the ride leaders.

The April 1922 CTC Gazette notice of District Association Runs has the following note for CTC Cambridge: ‘will members desiring to join the ladies’ week-day rides please communicate with the Secretary’, so there has been a stated commitment to promoting diversity and equality throughout the life of the club.

‘CTC’ and ‘fashion’ are two expressions rarely seen in the same sentence. Looking back at photos of CTC Cambridge in the 1930s we see that the heavy tweeds aren’t very much different from those seen in the 2018 Camcycle Festival of Cycling talk on Rational Dress during the Victorian era. Some of you may remember this fascinating account by Kat Jungnickel of how women adapted their clothes to suit cycling, and CTC Cambridge member Yasmin and her friend turned up in Rational Dress made from Kat’s patterns. Then as now, function is the thing: there’s no point wearing clothes which inhibit cycling.

In cooler weather in the 1930s, our original members wore heavy wool and tweeds to keep out most of the weather, and knickerbockers and long socks to keep legs warm but clothes away from moving parts. 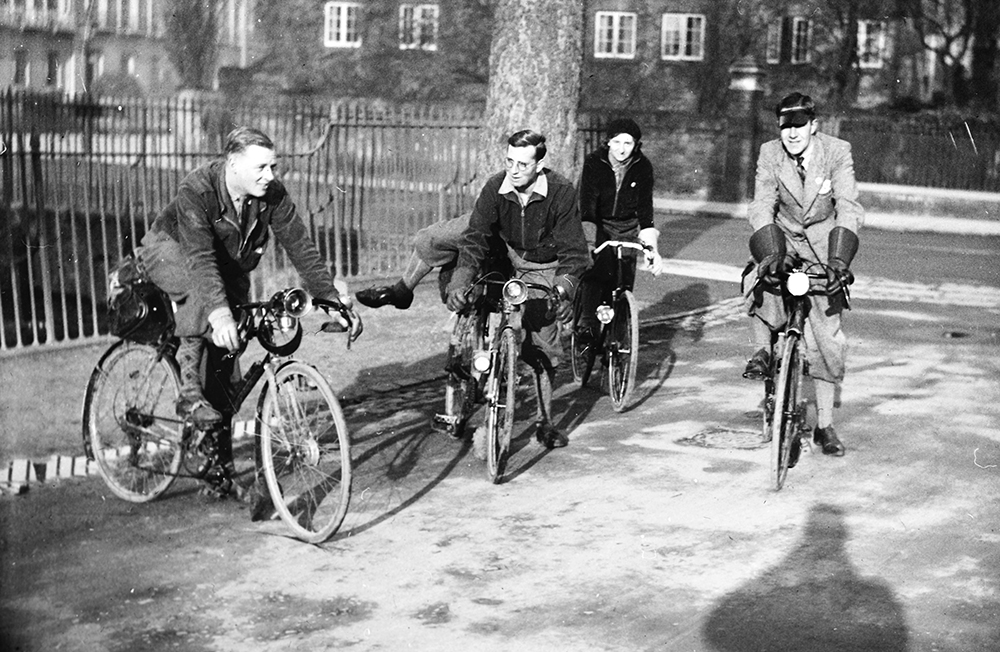 Here, four club members meet at Brookside just off Lensfield Road – this is where the club has met for a hundred years. The middle two are Donnex and Doris Claydon, who met through the club. It’s interesting to see that Doris is wearing much the same clothes as the men – how attitudes must have changed since the Victorian days! The zips on the Claydons’ jackets must have kept the wind out better than the button-up one.

In summer, a lighter linen or cotton shirt with shorts is the thing – as worn by our ‘1935 girls’ here. Throughout how many hundreds (thousands?) of years has linen been worn for its good ventilation? Today’s everyday or touring cyclist knows a linen or thin cotton shirt will keep you cool, and wash and dry quickly.

The advent of helmets and lycra

In the 1980s and 90s, cotton T-shirts make an appearance and helmets start to be worn. Clothes get brighter, and a distinct uniform emerges in our club jerseys – presumably as a result of digital textile printing.

Lycra (invented in 1958) becomes a mainstay around this time. By the end of the nineties and into the noughties, other man-made fabrics stop being sweaty and become a permanent feature. Put in context, the Middle-Aged Man In Lycra (MAMIL), a term apparently coined in 2010, seems hardly noticeable: lycra keeps clothing away from moving parts, doesn’t have uncomfortable seams, and doesn’t get completely saturated when it rains. While a few members prefer general outdoor gear, today the majority of club riders don’t think twice about donning lycra shorts or leggings (usually known as longs or tights) for rides. Brightly-coloured polyester jerseys and high-vis GoreTex jackets are widespread and probably here to stay!

From our early days to today, function always wins over form. We are outside all day, come rain or shine, and just need clothes that will keep enough of the weather off us to do what we love most – cycling from café to café, amongst friends, sharing the joy of being part of our landscape.

A centenary of campaigning

CTC Cambridge gets involved in campaigning, alongside Camcycle. Several CTC Cambridge members were leading lights in the A10 Corridor Cycling Campaign, for example. We look back to a few of the campaigning issues that were current 100 years ago when our club was established, and relate these to the present day. 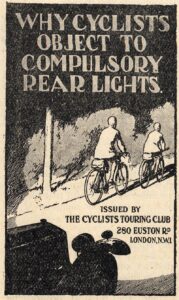 The topic of cycle lighting was being hotly debated 100 years ago – specifically the recent change meaning that cycles were meant to carry a rear light as well as a front light. This was seen by some as a step too far, including the Bishop of Exeter who was quoted in the March 1922 CTC Gazette: ‘Both as a motorist and a cyclist I strenuously object to the red light. It confuses a motorist as he does not know if it is a waggon or cycle he is overtaking. It is a monstrous interference with the liberty of the cyclist.’ It was also pointed out that a red rear light was already carried by cyclists who had impaired hearing, as a warning that they would not be able to hear approaching traffic.

A 1922 advert for Sunbeam cycles foresaw the health benefits of active travel and Camcycle’s ‘Spaces to Breathe’ campaign, noting that ‘colds and influenza are spread through coughing and sneezing in a confined atmosphere’ and that the best remedy is ‘exercise and outdoor locomotion. It is to the bicycle that we must turn to save us from the evils of modern civilisation’.

Cycling UK is campaigning today to have the law changed so that the potential to harm of different modes of transport is taken into account when considering where responsibility lies. In 1921, a CTC Gazette editorial said: ‘There is only one cure and that is to make the motor driver responsible … for every happening caused by him unless he can prove contributory negligence.’

We can’t conclude a snapshot of cycling in Cambridgeshire without mentioning local flooding: an annual problem, but not a new one. Flooded local roads didn’t stop hardy Fenland cyclists, as this 1936 photo taken near St Ives shows.

We’ve put a few more examples of early campaigns on our blog.