CTC Cambridge celebrated its 100th birthday on 11 May 2021, a century after the group’s first ride. It is the local group of the national cycling charity which was founded in 1878 as the Bicycle Touring Club, subsequently renamed the Cyclists’ Touring Club and now as Cycling UK. In Camcycle’s Summer 2021 magazine, John Seton and Yasmin Emerson took us on a tour through the club’s archives including a taste of some of the campaigning issues from the last century. Here we include a few more campaigns and consider how they relate to the present day. CTC Cambridge often gets involved in campaigning, alongside Camcycle, and several CTC Cambridge members were leading lights in the formation of the A10 Corridor Cycling Campaign. 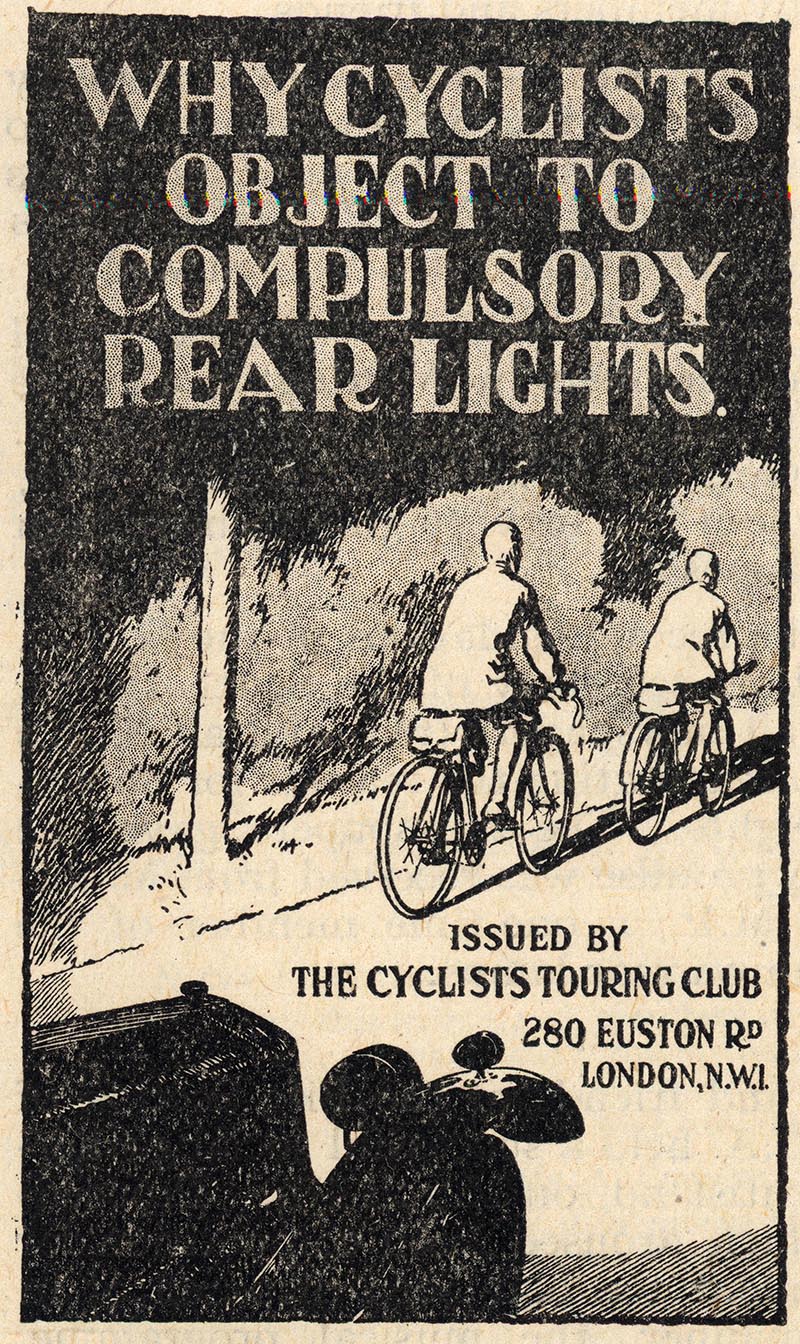 The topic of cycle lighting was being hotly debated 100 years ago – specifically the recent change meaning that cycles were meant to carry a rear light as well as a front light. The image shown is the cover of a 12-page pamphlet produced by CTC in 1922 to campaign against compulsory rear lights. It was seen by some as a step too far, including the Bishop of Exeter who was quoted in the March 1922 CTC Gazette: ‘Both as a motorist and a cyclist I strenuously object to the red light. It confuses a motorist as he does not know if it is a waggon or cycle he is overtaking. It is a monstrous interference with the liberty of the cyclist.’

It was also pointed out that a red rear light was already carried by cyclists who had impaired hearing, as a warning that they would not be able to hear approaching traffic.

A 1922 advert for Sunbeam cycles foresaw the health benefits of active travel and Camcycle’s ‘Spaces to Breathe’ campaign, noting that ‘colds and infuenza are spread through coughing and sneezing in a confined atmosphere’ and that the best remedy is ‘exercise and outdoor locomotion. It is to the bicycle that we must turn to save us from the evils of modern civilisation’.

Cycling UK is campaigning today to have the law changed so that the potential to harm of different modes of transport is taken into account when considering where responsibility lies. In 1921, the CTC Gazette editorial said: ‘There is only one cure and that is to make the motor driver responsible…….for every happening caused by him unless he can prove contributory negligence.’

Cycle theft was a concern, even 100 years ago. It was seen as particularly affecting people who used a cycle as their only accessible form of transport: they couldn’t afford bus or train fares, and cars were strictly the preserve of wealthier people. It was noted that cycling had shifted from being a form of recreation for the well-to-do, and had become ‘a convenient means of getting about. It saves time and tram fares; it is easier than walking; it helps to solve the housing problem by providing a solution of the transport problem. In short, the bicycle has become the indispensable helpmate of those whose means are scanty.That is why it would be an outrage to tax it.’

The writer, ‘Robin Hood’, in the April 1922 CTC Gazette goes on to say: ‘That is why I believe that every cycle thief should be boiled in oil.’ That might make those who ‘earn’ their living stealing from CyclePoint think a bit!

As long ago as 1955, with the battle over compulsory rear lights long since lost, CTC Gazette’s attention turned to the vexed issue of pedal reflectors. These were seen as a potential cause of close passes: ‘It would seem that to announce the fact by means of pedal reflectors and white stockings that one’s rear lamp and reflector belong to a bicycle may be to invite an overtaking motorist to scrape by dangerously close.’  So, cyclists were mindful of the ‘punishment pass’ over 60 years ago, on a road system that was already described as ‘overcrowded and archaic’.

We can’t conclude a snapshot of cycling in Cambridgeshire without mentioning local flooding: an annual problem, but not a new one. Flooded local roads didn’t stop hardy Fenland cyclists, as this 1936 photo taken near St Ives shows.