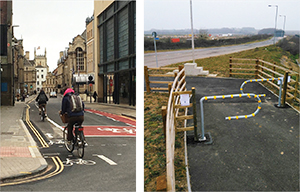 We’re delighted to see that the junction of Downing Street and St Andrew’s Street has been much improved for people walking and cycling. We’ve campaigned for changes here for many years and are particularly pleased to see the removal of the traffic island which blocked the use of the cycle lane by larger cycles.

However, barriers to cycling for all still exist on the approaches to the new A14 active travel bridges and the formal response to our petition was extremely disappointing. We continue to campaign for the removal of these exclusionary barriers and the adoption of LTN 1/20 to prevent measures like this ever being installed in future.

Sign the petition at bit.do/SignA14Petition and join the discussion on Cyclescape thread 5578.

The Greater Cambridge Partnership has funded improvements to two popular walking and cycling routes as part of preparation for its Greenways projects. A 220m stretch of Riverside near Stourbridge Common was resurfaced – part of the route for the Horningsea, Bottisham and Swaffhams Greenways and an important link to the Chisholm Trail. A 300m section of the Coton path near the M11 bridge (right) has also been upgraded (although the bridge itself still needs work) in preparation for the Comberton Greenway.

Other GCP projects include an initiative to encourage local communities to create ‘Playing Out’ streets in their neighbourhoods and a ‘try before you buy’ cargo bike scheme.

Most exciting of all has been the progress on the Chisholm Trail. With the underpass installed and the jetty reopened, we’re looking forward to the day when this transformational route is open for people of all ages and abilities to enjoy.