The Bike Harvest is a way in which students can donate their old bikes to a charity instead of leaving them unwanted around Cambridge.

With the Bike Harvest, you can reduce pressure on cycle parking and reduce waste by recycling.

The bikes will, where possible, be refurbished by a local charity OWL that employs disadvantaged young people. OWL also collect discarded bikes from some bike parks in Cambridge such as the station. They can then cover their costs by selling the bikes back to students at the beginning of the academic year. The long-term goal is to reduce to a minimum the number of abandoned bikes in Cambridge while creating some local employment in a green industry.

Students can donate their old bikes by taking them to a collection point in the bike park at the end of Easter term.

12 noon until 3pm on the following dates: 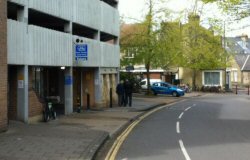 The Bike Harvest is at Park Street Cycle Park.

This is just a little further along from the ADC – next to the Mayhole – see the map below.

Just go towards the Union Society (near St John’s College), go left along Round Church Street, turn left, and you’re there.

The entrance is marked by a blue sign and blue painted path. The cycle park is in the lower floor.