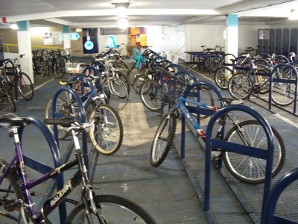 What is Park Street Cycle Park?

One of Britain’s biggest free indoor city centre cycle parks. It provides space for 282 cycles in a variety of cycle racks and lockers.

Briefly, what are the benefits?

Since opening the cycle park some of the original vertical cycle lockers have been removed and replaced with cycle equipment lockers – suitable for putting a helmet and some folded clothes. There is also a cycle repair service operating from there two days a week, and a St John Bicycle Ambulance service at weekends.

What are the opening hours?

There are over 200 cycle stands that are free to use. There are also 53 lockers available for monthly hire. 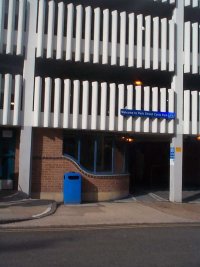 In detail there are:

This gives a total of 285 spaces. See our Park Street Cycle Park gallery.

I have a cycle with a trailer –
can I park there?

Yes. A variety of different cycle racks are available to accommodate the various sizes and shapes of cycle, including cycles with trailers, tandems and tricycles. The lockers can only accommodate conventional cycles, such as mountain bikes and standard frame bikes.

How can I get to the Cycle Park?

If you are travelling to the city centre from the Chesterton or Newmarket Road areas you can join the riverside cycle route which will bring you along the edge of Jesus Green to Thompson’s lane where you can follow the distinctive Cycle-in-a-D-lock symbols to the Cycle Park.

If you are entering the city centre from the North, crossing Magdalene Bridge, turn left into Thompson’s lane and follow the signs.

From the east and south of the city you can get to the cycle park along Jesus Lane, turning right into Park Street. 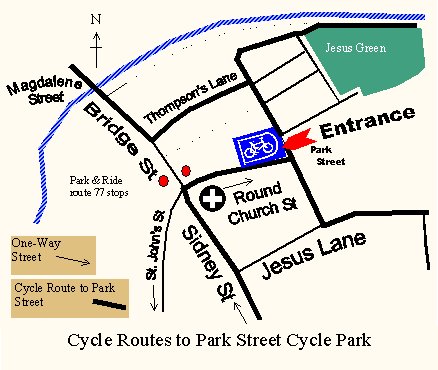 How secure is it?

The Cycle Park has several security features, some of which are listed here. Firstly the cycle parking has been chosen to be easy to use and to provide a secure place to lock the frame of the cycle. There is a CCTV system capable of scanning the whole cycle parking area, and there are other cameras at the entrance to the Cycle Park. There is a help point to provide reassurance, and there is a security guard present almost 24 hours a day.

These features do not guarantee security and so you must still lock the frame of your bike to one of the cycle stands. Use a lock that has been certified by independent tests, such as those listed by Sold Secure, for instance.

Why should I get a locker? 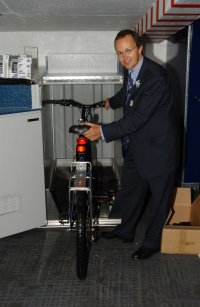 The cycle lockers provide extra security if you have panniers or want to hang a helmet and cycle clothing up inside. They provide resistance to sabotage and mean that the cycle is not easily visible to others. The cycle lockers are available for hire at the rate of £10 per month. They are suitable for people with very valuable cycles or those who don’t want to carry a heavy cycle lock. You can hire a locker by calling the Cambridge City Council Parking office on 01223 457340.

What happens if my cycle is stolen?

Cycles are parked at the owner’s risk. If your bicycle is stolen please report the theft immediately by calling Cambridge Police on 0845 456 456 4, also inform the security guards at the cycle park.

Are there any other large city centre cycle parks in Britain?

We are aware of some in city centre cycle parks in Leicester, Liverpool and York. If you know of any more please let us know.

Why do I have to walk my cycle inside?

The Cycle Park is a conversion of a car park built in the 1960s. If there were the luxury of building a new facility in the centre of Cambridge for cycles like this, a cycle-in entrance would have been a priority. The cycle park was designed in consultation with Cambridge City Council, Cambridgeshire County Council, Cambridge Police, Cambridge Disability Access Panel and Cambridge Cycling Campaign.

The only entrance available that was considered safe and convenient was the current pedestrian through route that is also partly shared by delivery vehicles. This is a narrow gap, currently used by pedestrians (often with pushchairs) and wheel-chair users. To accommodate the wheel-chair users electronically controlled doors were added to access the payment areas. However the area outside the security office remains a busy cross over point and so it was felt that we had to ask cyclists to walk their bikes in this area to reduce the chance of conflict on the sharp corners at the entrance. Evidence from the Leicester Bike Park supported the idea that cyclists would be prepared to do this.

A good deal of consideration was given to creating a cycle ramp into the Cycle Park from Round Church Street. Unfortunately the space requirements meant there was not sufficient headroom clearance to accommodate this. This ramp would not have had convenient access because of the direction of the one way system in Round Church Street (most users would be expected to come from the Jesus Green direction). Another entrance may have compromised the security of the Cycle Park.

We ask you to respect this decision and out of courtesy for the staff at the Cycle Park to please walk your cycle in and out of the Cycle Park. In the expectation that the majority of users of the cycle park will comply we have been able to avoid putting in a tight chicane at the entrance that would force cyclists to dismount, but would also inconvenience those with trailers and tandems.

Why was it built?

Cycle Theft is one of the highest volume crimes in Cambridge. At times in the city every cycle rack, railing and wall space seems to be occupied by parked cycles, and it is difficult to find a secure place to park a bike without causing obstruction. Park Street Car Park lies close to the centre of the city of Cambridge, and is rarely full since the introduction of measures to control motor vehicle access to the city. This created the opportunity to site a much-needed large capacity cycle park. 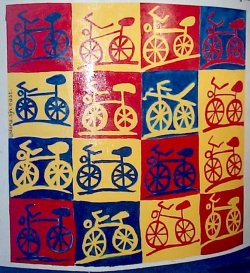 Who paid for the project?

Park Street Cycle Park was the biggest ticket item in the Cycle Theft Reduction Project. The 2-year project began in September 2000 with a grant of £167,000 from the Home Office’s Targeted Policing Initiative. The cycle park cost £75,000 to build and we are grateful to Cambridge City Council for the use of their building for the project. Cambridge City Council now operate the cycle park.

The rest of the money in the project has been spent on cycle parking in the city centre, other parts of the city and in other ways of reducing cycle theft. A number of cycle security coding events have taken place and the registration of bikes at the local universities has been boosted.

Where can I find out more details?