The County Council have published proposals (including indicative maps which show the kind of changes they have in mind) for a bid for £500m of transport investment, followed by a weekday morning peak -only congestion charge from around 2011. This is following a study funded under a government initiative, the TIF pump-priming round 2.

These proposals have the potential for a huge investment in cycling and improvements to the cycling environment through limiting traffic especially on some key routes.

The Cycling Campaign’s take on the proposals

Map of the cycling proposals 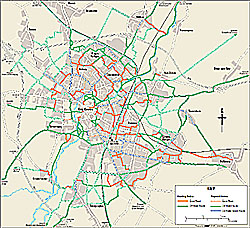 Key points of interest for cyclists:

Cambridge Cycling Campaign continues to express concern that opponents of a possible congestion charge are ignoring basic realities about the development of Cambridge. The Campaign considers that the proposals must be seen as part of an unprecedented £500m up-front proposed package of public transport, Park & Ride and cycling improvements. Many opponents of the congestion charge seem to be unaware of these potential improvements.

Some 50,000 new dwellings are planned for the outskirts of Cambridge in the coming decade. That amounts to perhaps 125,000 new people, very many of whom are likely to want to travel in and around Cambridge. We already have huge traffic problems on major routes, and that’s without the vast influx of new residents expected in the next 10 years. Radical measures are needed.

There are two forms of demand management on the table. Either drivers can sit in total gridlock, or the city can potentially get an enormous £500 million of new transport investment coupled with a weekday morning-only peak congestion charge to make people think more carefully about how they travel. With 50,000 extra new dwellings around the edge of the City in the coming decade, a radical change simply has to be made. And the reduced levels of congestion would make Cambridge a far more pleasant place to live, work, and play.

Although we as a Campaign are waiting for the full details before we can pledge our full backing, the proposals have real merit because of the half-a-billion pounds of up-front government transport money that it would bring. Opponents of a charge need to say otherwise how they would cater for the huge influx of people to the area to prevent intolerable congestion.

The Campaign is concerned that many of the facts about the proposals have not yet been heard by those currently opposing the scheme:

PRESS RELEASE: “Refusing half a billion pounds of funding for transport schemes would be madness”

Cambridge Cycling Campaign has said that to refuse a package combining half a billion pounds of free government money for transport with a weekday morning-only congestion charge would be a huge lost opportunity.

The proposed charge is part of a package whose other major (and arguably more important) aspect is an absolutely enormous fund of £500 million to provide a huge range of public transport (bus and train), cycling and walking schemes, plus new and expanded park and rides sites. Such money would be contingent on a charge.

A scheme of two parts: £500 million followed by congestion charging

“Do Cambridgeshire residents really want to throw away £500 million of funding, which would give them genuine, high-quality alternatives to being stuck in traffic queues? This level of funding would totally dwarf current levels of investment. It would be free money on the table from the Government, assuming a bid would be accepted, as seems likely.”

“The Campaign agrees with the principle of demand management, though there remain many questions to be answered before we can give complete backing. However, we feel the proposals must be seen as part of a much bigger package of public transport, Park & Ride and cycling improvements. We would like to see more press coverage of the other half of the scheme: the proposed half-a-billion pound package of transport investment.”

“Many motorists, particularly those coming in from outside Cambridge, would ironically be the biggest winners of this scheme. The improved public transport would get many city-dwellers out of their cars. Public transport users would see huge benefits and the current level of around 25% of commuter journeys by bike would rise.”

The Campaign is concerned that many of the facts about the proposals have not yet been heard by those currently opposing the scheme:

Cambridge Cycling Campaign warmly welcomes the large package of measures proposed by the County Council for demand management and associated measures in Cambridge.

We are particularly pleased that a significant amount of money is proposed to improve the conditions for those on foot or on bicycle, and that this will occur prior to any congestion charging.

The cycling aspects of the proposals represent a massive step-change in quality standards. For the first time, funding that would enable continental standards would become available.

The fear of speed and volume of motor traffic are the biggest deterrents to people cycling. Quality new routes between areas, improvements to existing routes, and the provision of spacious and protected on-road routes alongside main roads, as well as proposals to fix many cycle-hostile junctions and vastly improve levels of cycle parking, will encourage more people to walk and cycle.

“It is now over 40 years since the first major Government report on road pricing. In other forms of transport, including local trains and buses, demand is managed by varying the charge. Doing so in congested cities will reduce congestion and hence pollution. If people switch to walking and cycling for shorter journeys, not only will they save money and improve their health, but the road space will be available for those whose trip by motor vehicle is essential.”

“For this to work it will be important for many of the incentives for motorists to switch modes to be available well before charging even starts. We believe there are several schemes which could be implemented relatively quickly, showing commitment by the County, and giving early benefits to those who choose to cycle.”

“The proposals are radical, balanced, necessary, and will benefit everyone by ensuring the future health of Cambridge as a city. The County has heeded our message that increasing levels of cycling requires much more of a focus on quality. The proposals make real space for cycling, rather than just fitting it in or putting cyclists onto pavements.”