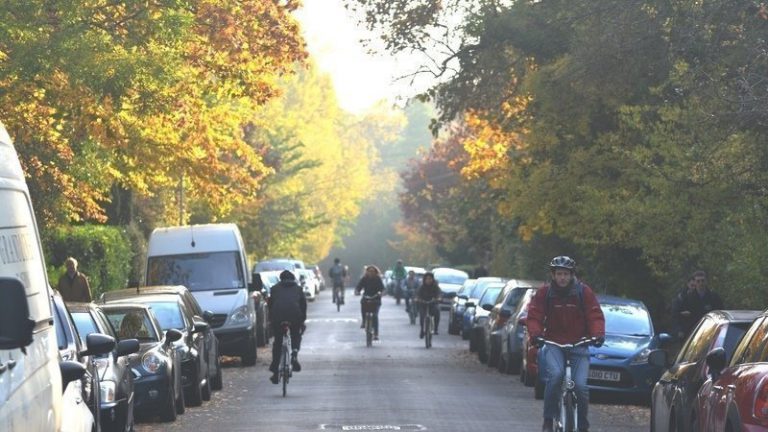 Bikes and buses – we need them both. When planning for the sustainable transport system of the future in Greater Cambridge, we must ensure that public transport and cycling networks are separate but complementary to each other. There should be no conflicts between those using the bus and those cycling because we need more people to do both of those things. Therefore we object to the Greater Cambridge Partnership (GCP) proposal to send 30 buses an hour along Adams Road, one of the busiest cycling routes in Cambridge, as there is not enough room for safe, separate infrastructure.

Proposals for the Cambourne to Cambridge busway will be presented at the GCP Joint Assembly meeting on 30 January 2020. It is vital that we let the Joint Assembly members know that turning Adams Road into a bus route is a bad idea. Read our press release in response to these proposals on our blog.

Cambridge MP Daniel Zeichner recently joined Camcycle and local campaigners on Adams Road to show support for the petition and campaign to save Cambridge’s busiest cycle route. He said “I warned a decade ago that building Cambourne without building proper transport infrastructure was a mistake and today we are still paying the price. We must improve public transport to, and around, Cambridge, but this must not be done to the detriment of the many people who are already doing their bit for our city by cycling and walking. The status quo on Adams Road is not perfect, with so many parked cars down both sides of the road and we should make the best use of available road space so cyclists get safe, segregated routes.”

Use contactus@greatercambridge.org.uk for the attention of: