TAKE ACTION! Sign our petition to ensure that Windsor Road gets a scheme that improves accessibility for all types of cycles and mobility scooters.

The Windsor Road scheme as mentioned in the previous blog post is meant to be a ‘traffic calming scheme‘, although unfortunately it does not really seem to achieve this goal.

For one thing, it does not include any kind of modal filter to stop the rampant rat-running that occurs through Windsor Road and Oxford Road, and instead it contains fences and railing that will actually encourage higher speeds from motorists and make pedestrians less safe. This is a real shame and a missed opportunity. However, right now we have focused on the clear and present danger of an obstruction of the existing and long-standing active travel route that passes from Warwick Road to Windsor Road. Some of our members have written to us and said they can recall using this route for over 60 years!

Unfortunately, the currently proposed plans would render it inaccessible to many people using tricycles, cargo cycles, tandem cycles, disability-adapted cycles, some mobility scooters and cyclists who are towing trailers. This is really strange considering that one of the supposed main principles of the Windsor Road scheme is to ‘increase cyclist accessibility’. 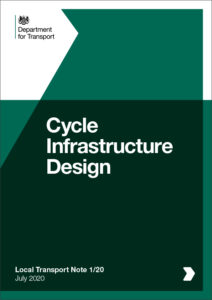 It is true that the passageway is substandard for the level of usage that it receives; however, it cannot be widened due to the limited amount of space available between properties. Making the Windsor Road end of it narrow, conflict-ridden and inaccessible to many people would make things worse. Two wrongs do not make a right. The correct approach is to do the best we can with the portion of the route that can be changed.

Local Transport Note (LTN) 1/20 is the government’s latest design guidance for any infrastructure that pertains to cycling. It applies to all highway and off-highway schemes, unless there is absolutely no chance that cycling is involved. Furthermore, it came into effect in July 2020 and applied immediately to all schemes in development at that time. For example, LTN 1/20 was used as the basis for rejection of a planning application by Cambridge City Council, merely three months after the government had introduced it. Therefore it unquestionably applies to the Windsor Road scheme, in which the latest drawing is dated 1 November 2021. Let’s review some of the relevant core and summary principles of LTN 1/20. All of these are direct quotes:

The designer of the Windsor Road scheme claimed to us in conversation that the scheme for the junction could not follow all of these LTN 1/20 principles because the passageway is ‘not a carriageway‘. That claim strikes us as odd: there is no reason for a cycle route to be less important or less direct just because it is partly off-carriageway.

It also seems that the designer has subscribed to the old-fashioned prejudice that barriers of some sort should always be put in the way of cyclists. Barrier-proponents usually claim something like ‘but cyclists might dart out into the roadway‘ as if they have forgotten that cyclists must already navigate countless ordinary road junctions on an everyday basis. This fear of ‘darting‘ is a long discredited notion, and those sorts of obstructions on cycle routes are now officially banned in LTN 1/20, which as mentioned above requires cycle routes to flow, be direct, and not have any chicane barriers.

However, there was never any logic to this ‘darting out‘ notion, it is simply a zombie idea that sometimes pops up from those whose minds are stuck in the driver-centric mould of the 20th century. They mainly see cyclists from a windscreen perspective as pesky annoyances who ‘dart‘ around and get in the way of car drivers, instead of respecting them as fellow road users who have the right to use the public highway. This anti-cycling sentiment has never been appropriate, especially not in a city that prides itself on leading the nation for using cycling as sustainable transport. The real answer to perceived problems of conflict is to employ good design that provides ample space for active travel, and that is easily possible at this particular junction.

This realisation leads us to the correct way of designing the scheme: as an ordinary road junction in which the passageway is simply another arm of the junction and cyclists are treated as fully legitimate road users. In fact, the number of people who use the passageway as a cycle route far outnumbers the number of people who use Windsor Road in any kind of vehicle. Therefore, when you consider the junction to be a standard four-arm junction and as a designer you are forced to choose between competing priorities, it is clear that the passageway and Oxford Road should be the prioritised route.

Can we do that? Absolutely yes, and not only can we do it, it has been done in Cambridge and other places. That’s not to say that we should simply copy examples without thinking: the design should be driven by LTN 1/20 and local considerations; however, they can help illustrate the situation and jog ideas loose.

For example, the foot of the Carter Bridge on Rustat Road shows one way to arrange things so that the priorities lie with the major cycle route.

For another example, the very busy Coton Path comes to a junction with Wilberforce Road, Adams Road and a wide driveway that gives access to the sports grounds. The current conditions are very poor there, but it is planned to be improved so that it forms a four-arm junction that prioritises the major cycle route. 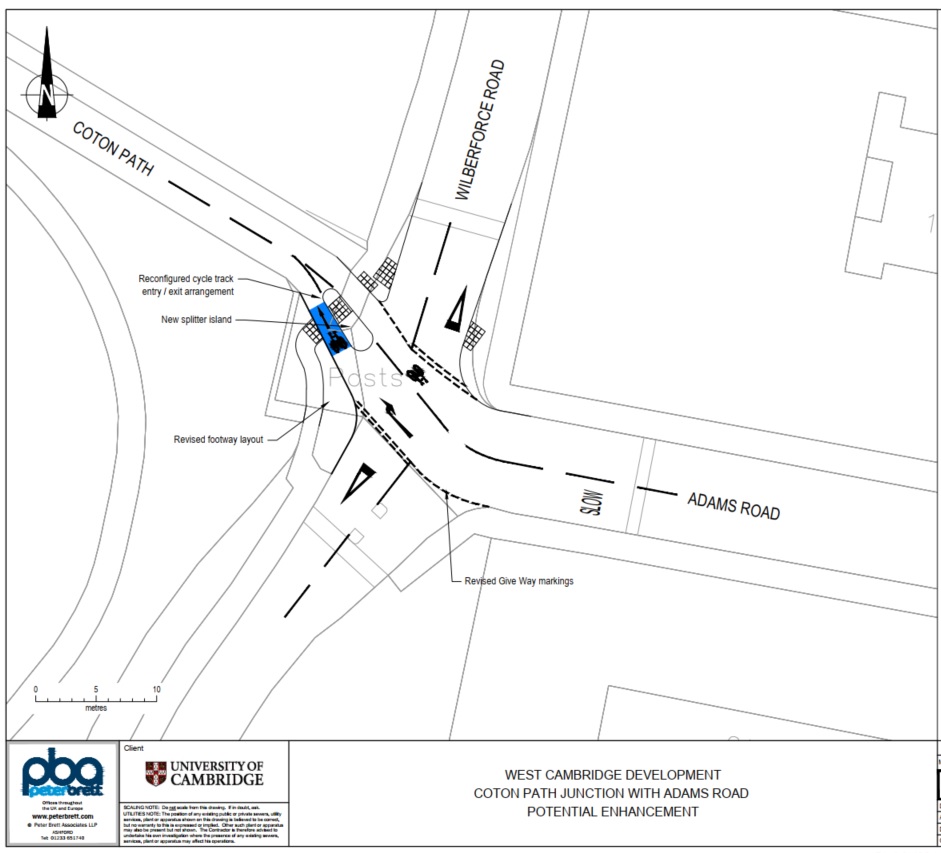 Therefore it is readily possible to design junctions where ‘off-road‘ cycle routes meet roads, and to do so in a way that prioritises the cycle route. Not only is it possible, it is desirable, under the county’s policies and the government’s guidance.

Let’s look at some options. The first requires the least amount of change to the proposed scheme: it merely puts the dropped kerb back in its place and removes some of the obstructive barrier fence (while leaving the part that improves visibility for pedestrians on the pavement).

Some more improvement is possible with some additional physical changes.

Finally, we could go all the way and mark priority for the major arms of the junction, Oxford Road and the passageway.

It may be necessary to insert a bollard in an LTN 1/20-compliant manner to prevent motor vehicle incursion into the passageway – this issue can be handled in detailed design.

This final conceptual drawing is very similar to an older conceptual drawing that we sent to the project team over four and a half years ago. The main difference is that we had also envisioned more priority for pedestrians, by including Zebra crossings of Windsor Road and Oxford Road instead of informal crossings. Those features could also be added to this design, but it would raise the cost further. In either case, had the project team taken on board our suggestions from 2017, then this entire problem would not have occurred. Furthermore, since that time, LTN 1/20 has been published. Our proposals are compliant with LTN 1/20 because they are fully accessible and inclusive to people using all types of cycles and mobility scooters, they provide a direct connection for the active travel route, they comply with the geometric requirements of cycling, and they treat cycles as vehicles. Concept 3 is most in keeping with the spirit of the county’s and government’s policies on cycling because it prioritises the major cycle route over the minor road. Therefore, we hope to see the design revised along the lines of Concept 3, but certainly any of the three concepts would be a major improvement in accessibility. Of course, we are happy to consider any other proposal that also respects LTN 1/20.

TAKE ACTION! Sign our petition to ensure that Windsor Road gets a scheme that improves accessibility for all types of cycles and mobility scooters.