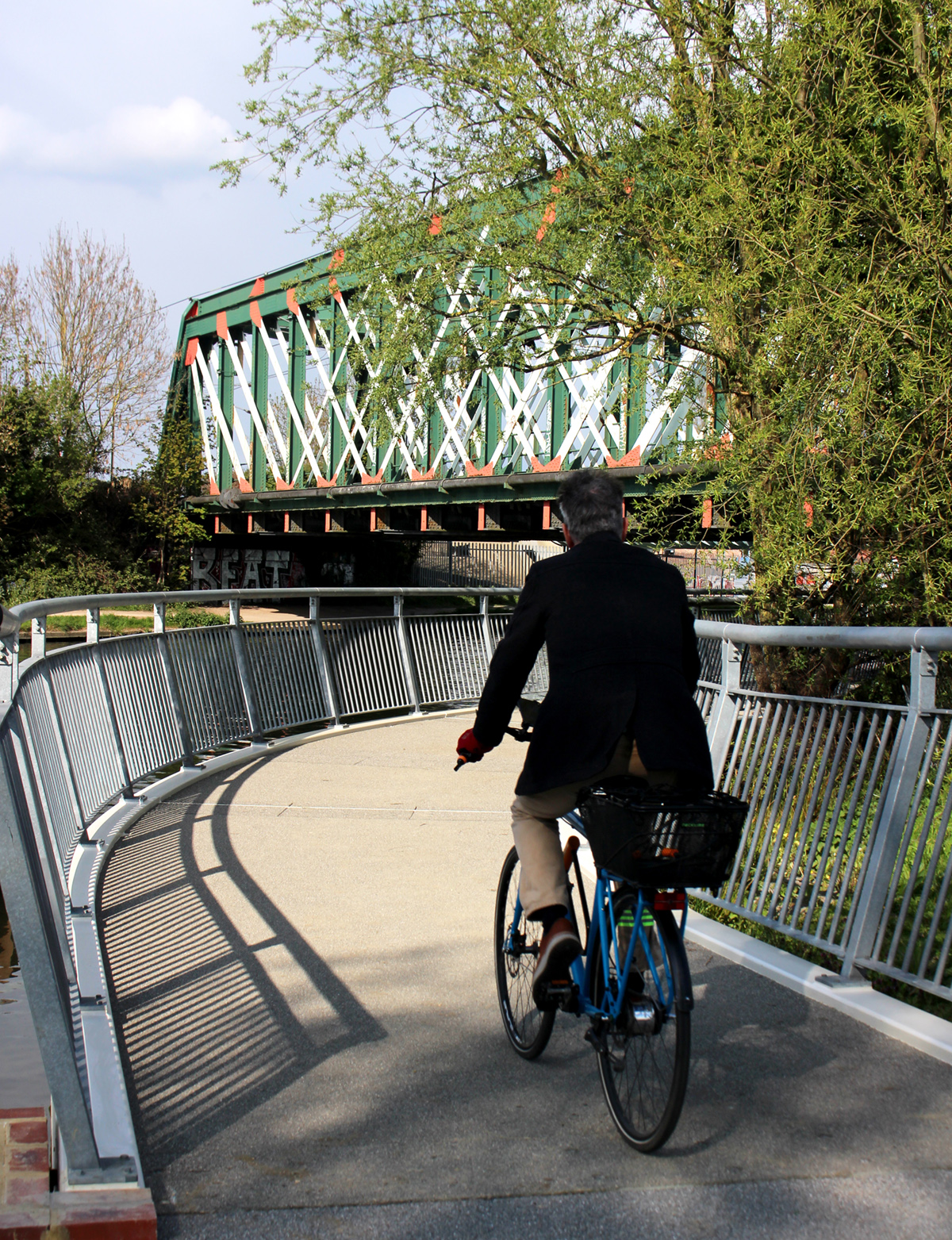 Stourbridge Common and Ditton Meadows were connected again when the new jetty link by the river Cam opened at the end of April. The jetty runs beneath the existing railway bridge and the new Abbey-Chesterton bridge which will form part of phase one of the Chisholm Trail, the walking and cycling route which will traverse the city from north to south. The jetty link forms part of National Cycle Network Route 51, which is one of the most popular cycle routes connecting Cambridge with surrounding villages.

Camcycle member Simon Nuttall flagged up the imminent opening when he arrived at the site in the early afternoon to find the final fencing being put in place before the Bank Holiday. Local people gathered to welcome the opening of the jetty which they said had been closed for ‘too long’. Construction of the jetty, bridge and nearby Chisholm Trail connections faced delays owing to the Covid-19 pandemic and adverse weather conditions which resulted in a closure of around 20 months.

The new jetty is wider than the previous wooden structure with improved visibility and cantilevered railings leaning out across the river. This design, proposed by Sustrans’ founder John Grimshaw, gives extra useable space for cyclists (when wheels are close to the edge, handlebars don’t catch on the metal spindles or handrail). There is a single-width gate and cattle grid at the Ditton Meadows end which were already being investigated by local cattle minutes after the opening.

Camcycle’s Executive Director, Roxanne De Beaux, livestreamed the opening of the link on Facebook. She thanked contractors from Tarmac for their work delivering the project and spoke to a local cyclist who said she felt like she’d ‘been set free’! As a vital link between local communities, we’re delighted to see the new jetty opened and improved for all users. Thanks to the Greater Cambridge Partnership and Cambridgeshire County Council for their work on the project and to Jim Chisholm for the dedicated campaigning that made it happen. This is an exciting step on the way to the opening of the Chisholm Trail which we know will transform the journeys of so many people in and around Cambridge.