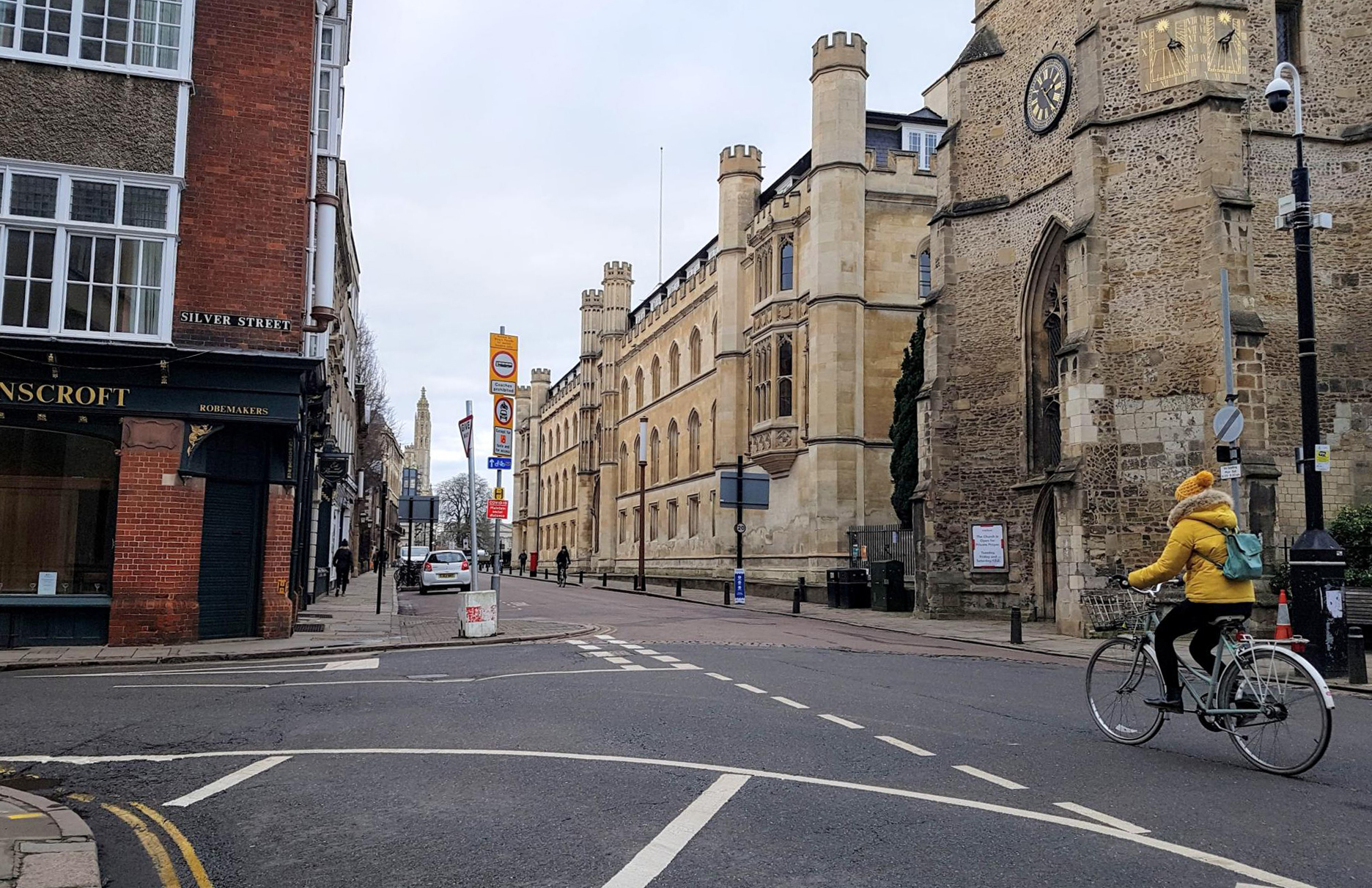 The second phase of experimental walking and cycling schemes is starting to be put in place and Camcycle is delighted to see that some small changes are already making a big difference to active travel in Cambridge.

One of the first changes to be made, early in the new year, was the county council’s rearrangement of the Silver Street/Trumpington Street junction. The route along King’s Parade and Trumpington Street is one of the city’s busiest cycle routes, particularly when students are in Cambridge. Repainting the road markings to give priority to traffic travelling in this direction over that coming from Silver Street (now much reduced in terms of motor traffic, thanks to the 24-hour bus gate) has made turning safer for everyone.

The improvement is especially noticeable for cyclists travelling north to King’s Parade, who previously had to wait in an awkward position in the middle of the road. The give way for Silver Street traffic has also improved the crossing for pedestrians travelling in this direction. Reactions from users of this route have been very enthusiastic. Helen, on Facebook, said: “Yey! We use this a lot and really appreciate this change,” while Amy said: “Ooh, that’s much better, I always hated that junction. Simple but effective!”

Another scheme transforming streets for the better is the Greater Cambridge Partnership extension of Experimental Traffic Regulation Orders (ETROs) in the Newtown area. In phase one, installed last summer, modal filters were placed on Bateman Street, Coronation Street and Pemberton Terrace. Phase two, which was put in place on 20 January, sees an additional filter placed on Panton Street and some amendments made to traffic direction to accommodate changed movements in this area. Results from a consultation on the phase one measures are currently being analysed and a consultation on the phase two measures will take place later in the year. Feedback from residents has been positive, welcoming the quieter neighbourhood. One local couple said they were pleased that their 12-year-old son now had a safer route to school, and Felix, who lives and works in Brookside, said: “I think the location of Newtown means that really the amount of driving that happens in this area should be very limited – it’s very close to the city centre, there’s good cycling infrastructure and good public transport, so most people shouldn’t need to drive around. I see the closures as a benefit to the people who live and work here and I’m hoping they will continue in the future.”

In the south of the city, another experimental scheme from phase one of the Covid-19 active travel measures has also been extended. Nightingale Avenue was transformed into a quiet street for walking and cycling when a modal filter was put in place near the junction with Hills Road, but there was a missing link for those travelling to Addenbrooke’s Hospital and the Biomedical Campus. At the end of January, this was rectified when double yellow lines were painted along Red Cross Lane, along with side streets Stansgate Avenue and Greenlands. Local residents had long been campaigning for a solution to issues of anti-social driving and parking in the area, so the introduction of these parking restrictions has created a more pleasant place to live as well as a safe, direct route for people walking, wheeling and cycling.

Camcycle thanks Cambridgeshire County Council and the Greater Cambridgeshire Partnership for these effective schemes which have made a real difference. We look forward to welcoming more trials across the county and are working with the local groups calling for them to be put in place. In Cambridge, calls are growing for urgent action to deliver safe journeys on Arbury Road and in Huntingdonshire, Hunts Walking & Cycling group would like to see the medieval bridge between Godmanchester and Huntingdon become a safe route for students at Hinchingbrooke School and others travelling between the two places. These are just two of the dozens of measures on the county’s list of phase two schemes which together could transform active travel in the region and help more people travel safely on foot and by cycle during the Covid-19 pandemic and beyond.