There are two consultations underway which will help shape improvements to cycling and walking in the east of Cambridge.

The Greater Cambridge Partnership (GCP) Cambridge Eastern Access consultation would like community views on options to improve public transport and active travel into and around the east of Cambridge. There are five packages of options to consider. Options A1 and A2 are short-term measures (to be delivered before 2025) which focus on improvements to Newmarket Road and the potential to move and enlarge the current Park & Ride to a location slightly further out of the city. Options B1, 2 and 3 are proposals for long-term improvements to public transport including a new high-quality public transport route (which would integrate with plans for the CAM metro) and providing more capacity and stations on the existing Newmarket to Cambridge railway line.

Meanwhile Cambridge City Council’s East Barnwell Conversation – Framework for Change consultation seeks residents’ views on a new draft masterplan for the area, looking at options for developing future housing, community and business facilities in this part of the Abbey ward. One of the aims of the masterplan is to encourage active travel, by improving the pedestrian and cycle links both within and from East Barnwell to surrounding areas of Cambridge. Road traffic issues were a key concern for those who took part in the first phase of community engagement in spring 2020.

Read our members’ assessment of and recommendations for Eastern Access routes

We have long campaigned for improvements to walking and cycling from the east, particularly along Newmarket Road and we support the GCP’s proposals for segregated cycleways on both sides of the road from East Road to Airport Way. This would allow all shared-use provision to be removed and footways restored and improved for pedestrian use. The dangerous Newmarket Road/Barnwell junction (where a cyclist was killed earlier this year) should be replaced with a Dutch-style intersection that is safe and convenient for people walking and cycling and all junctions along the road should prioritise active travel, with separation in time and space and better management of traffic signals. Additional crossings should be included for walking and cycling to break down the current barrier to active travel created by the road.

There is an urgent need for many improvements to existing junctions, paths and cycleways in the east of the city and many of these changes, such as improvements to the Wadloes Road and Barnwell Road cycleways, better access into and around the Abbey Leisure Complex and a new Dutch-style design at the Barnwell Road/Coldham’s Lane roundabout, should be implemented as soon as possible. New and existing road and cycling network should meet the standards laid out in the Department for Transport’s Cycle Infrastructure Design Guide (Local Transport Note 1/20).

Members do not have a majority view in favour of any new route across Coldham’s Common, such as that marked to connect development at the airport site to the Chisholm Trail. Improvements to existing routes (on and off road) are of much higher priority and should be delivered as soon as possible.

We are disappointed that the Cambridge Eastern Access consultation does not include planned and existing cycle infrastructure on its maps, despite being billed as a consultation on ‘Better Public Transport and Active Travel’. This makes it difficult for people to assess current and existing cycle routes and connections. The long-term proposals do not make it clear whether the new public transport routes set out will remove, change or improve existing cycling infrastructure such as the Tins and Snakey Paths and Greenways routes. We’ve edited one of the GCP’s maps below to show some of the existing and planned cycle network for this area. 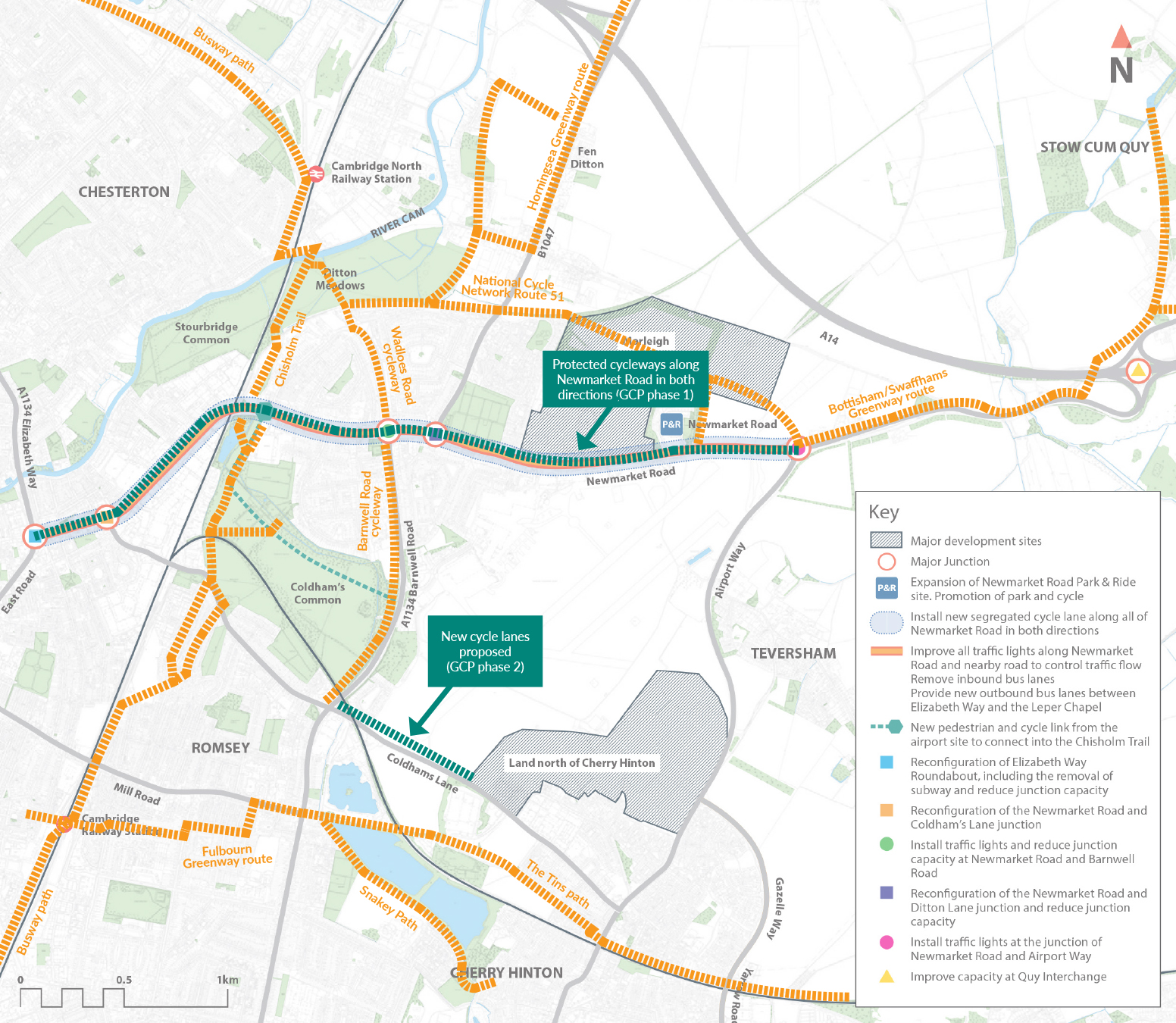 It is essential that the Eastern Access work is integrated with other GCP projects such as City Access and the Greenways, and also plans from other authorities such as the Cambridgeshire and Peterborough Combined Authority’s proposals for improvements to the Barnwell Road/Coldham’s Lane roundabout and the city council’s East Barnwell Framework for Change.

Read our response to the East Barnwell consultation

East Barnwell needs to be a place that supports everyone who lives there, ensuring good access to work, education, shops, services, open space and leisure amenities within a short walk or cycle ride. New ‘15- or 20-minute neighbourhoods‘ should be created to address current issues in the report such as ‘a high level of car dependence’ and ‘streetscapes dominated by cars’.

High-quality walking and cycling connections including links to central Cambridge and the Chisholm Trail route are essential and barriers to active travel such as dangerous roads and junctions should be improved. All active travel routes should be designed to be accessible to all types of rider and cycle, in accordance with the standards laid out in Local Transport Note 1/20. Camcycle takes no position on the level of housing required, but all new residences should have excellent access to sustainable travel routes and be provided with high-quality cycle parking.

Demand management schemes should be introduced alongside improvements to active travel infrastructure; these should include resident parking zones, car clubs, community or on-demand public transport and low-cost cycle hire or loan schemes which include provision for local businesses, families and those with disabilities who would like to travel by cycle. Walking and cycling routes should be safe, direct, comfortable, attractive and coherent to enable as many people as possible to choose active travel for their everyday journeys.