If riding isn’t possible at the moment, then there’s plenty of related material to keep you entertained. In case you haven’t seen it, Camcycle’s quarterly magazine is full of great content (and you can view past editions here). We’ll keep our lists updated with recommendations from our members; be in touch if you have anything to add! 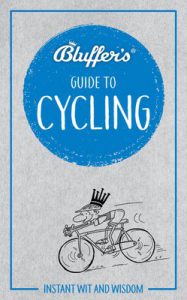 One of the best selling book series of Bluffer’s Guides, this is a pocket-sized book which is an entertaining, easy read about cycling that you can dip in to.

‘Bicycle: Love Your Bike: The Complete Guide to Everyday Cycling’ by Helen Pidd

This is a guide for ordinary, non Lycra-wearing people who happen to cycle or want to start.

‘Re: Cyclists’ by Michael Hutchinson

A well referenced dive into the history of cycling, covering its rise, glories and despairs.

‘In the City of Bikes’ by Pete Jordan

The story of this author’s love affair with Amsterdam, the city of bikes, which explores an unknown history of the city’s cycling from the craze of the 1890s, through WWII to the bike-centric culture we see today.

‘Building the Cycling City’ by Melissa and Chris Bruntlett

All over the world, the bicycle is enjoying a revival. City officials are rediscovering it as a solution to acute, 21st century problems and the Dutch are at the vanguard of biking solutions. This book examines the triumphs and challenges of the Dutch while also exploring other urban areas which are implementing ideas for cycling success.

‘The Escape Artist’ by Matt Seaton

Autobiographical story about the early life of the author in the racing clubs and culture of south London.

A comprehensive, clear and compelling book about everyday riders and the ways in which they can transform the urban environment and way of life for the better.

‘Cols and Passes of the British Isles’

A beautifully produced, short and excellent read in which Graham Robb catalogues these obscure and magical sites which provide a new way of looking at British history and a challenge for cyclists and walkers.

List of recommended reads on the characteristics of cities and towns as well as their development and planning to develop thinking around how to create space which enables people to live well.

A look at the social setting of the cycling boom of the 1860s and 1880s onward, ranging from the attitudes to the ordinary to the effects of and reactions to women taking up cycling.

Things to watch and listen to:

In the words of Chris Bruntlett of Modacity: ‘This film is a “must watch” for anyone interested in understanding how cities that are better for cycling are also better for living.’ This was screened as part of the first Cambridge Festival of Cycling.

First feature film shot entirely in Saudi Arabia. Story of a 10-year-old girl who, undaunted by the social restrictions, determines to buy a green bike from the shop so that she can beat her friend Abdullah in a race. Charming and funny.

Podcast hosted by Ned Boulting and David Millar. The two talk about lots of things, although they never stray far from the core issue: bike racing.

Award-winning documentary about bicycling as a source of freedom and connection in a gas-powered, digital and divided world, is available to stream now!

Filmed on the streets of Cambridge, this short film contrasts the riding behaviour of two families, the Wrights and the Rongs, to illustrate road safety. See if you can spot some of the following: Emmanuel College, the old Addenbrooke’s Hospital and various businesses which still exist!

A sweeping history of the humble bicycle from its Victorian roots to the modern age with a particular focus on the UK. Interviews with bike designers, historians, and Olympians, means that there’s something for everyone.

The true story of Graeme Obree, the eccentric Scottish cyclist who broke the world hour record in the 1990s on Old Faithful, a bicycle of his own design built partly from scrap metal and parts he salvaged from a washing machine. A classic underdog story, this dramatisation of Obree’s autobiography shows how his maverick style clashed with cycling authorities of the day, and how he overcame mental illness to triumph a second time.

This animated French comedy, nominated for an Oscar in 2003, is one of the quirkier choices on this list. It follows the story of Madame Souza and her dog Bruno as they try to track down her pro-cycling grandson who has been kidnapped by the mafia. Along the way, she enlists the help of and the washed up singing Belleville Sisters. What follows can only be described as bracingly original, slightly surreal, and utterly charming. 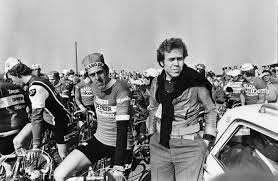 This classic documentary looks at the infamous Paris-Roubaix race during one of road cycling’s golden ages. In an amateur era when riders didn’t have the luxury of professional support teams and expensive sponsors, legends like Eddy Merckx and Roger De Vlaeminck would race through quagmires and high drama to win the “The Queen” of the Spring Classics.

Bicycle Thieves is one of those classic films that looks familiar because it has been borrowed from so extensively. It follows labourer Antonio and his young son, Bruno, on a journey through post-war Italy to recover a stolen bicycle which Antonio needs to keep his precarious job. Packed with beautiful, simple storytelling, it is as much a commentary on the crushing indignity of poverty as it is about love for a favourite two-wheeler.

A candid, behind the scenes documentary about the formation of GreenEdge, Australia’s first ProTour cycling team who were known for their camaraderie and loyal fans. It is one of the more intimate portrayals of the immense pressure and frequent tediousness of being a professional cyclist in the modern era. 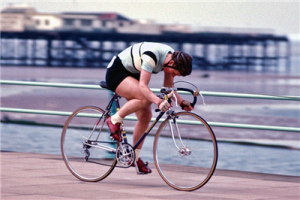 Beryl Burton is arguably the greatest British sporting hero of the last 100 years that most people have never heard of. In a 30 year career that began in the 1950s, she was Women’s World Champion five times (along with 3 silver medals, and 4 bronzes), was crowned British Best All-Rounder female time trialist for 25 straight years, and, most famously, broke the 12 hour record for both men and women, offering the male cyclists sweets as she overtook them on the course. This short documentary tells her story, complete with the Rocky-esque training montages that were obligatory for the period.

‘Breaking Away’ (1979) available on Amazon Prime

Nominated for the 1979 Best Picture Oscar and winner of the Best Screenplay, this is a coming of age story about a 19 year old obsessed with Italian cycling but stuck in suburban America. Full of drama, dark humour, and a good dose of Hollywood feelgood vibes.

Film documenting the inaugural Trans Am Bike Race, ridden by 45 individual cyclists which is set against a vast landscape. The clock started as they left the Pacific coast of the USA, and only stopped when they crossed the finish line 4,233 miles later on the other side of the country.

‘The War on Cars’ podcast https://thewaroncars.org/

“The War on Cars is a new podcast about the epic, hundred years’ war between The Car and The City. We deliver news and commentary on the latest developments in the worldwide fight to undo a century’s worth of damage wrought by the automobile. We produce a new show every other week.”

Quite US-centric, but entertaining and occasionally quite cathartic to know there are others who have similarly strong feelings about SUVs, sharrows, and community meetings.

Episode 199 features John Parkin talking about Designing for Cycle Traffic for anyone who missed him when he spoke at our Camcycle meeting.

Wanting to up-skill or learn something new?

The Cycling Professor is offering a free online version of a course which our Executive Director has attended and will be telling us about in April.

The London Cycling Campaign launched its ‘Climate Safe Streets’ report, a roadmap to decarbonise the capital’s roads in the next 10 years. This report lays out the specific decisions the next Mayor of London must take to achieve this, as well as the opportunity for boroughs to take a big leap towards addressing the Climate Emergencies they have declared (the report was produced before the postponement of the London mayoral election by 12 months. The arguments and policy proposals are, however, unaffected by this). Climate Safe Streets has been sponsored by Lime, Trek and LCC Patrons.

This one hour LTTV webinar, held on Friday 3 April 2020, had presentations from the London Cycling Campaign and report partners detailing the recommendations outlined in the report. Speakers included:

Creating Climate Safe Streets – an introduction to the report and the need to change how we travel – Fran Graham, Campaigns Coordinator, London Cycling Campaign