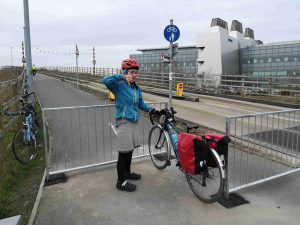 Very suddenly on the 8th of January, staggered cycle barriers appeared on the busway shared path at the bottom of the hill near Francis Crick Avenue at the Cambridge Biomedical Campus. These barriers are of a dated and dangerous design and present many risks.

These staggered barriers are grey solid metal and are almost invisible, even on a bright day. There is no signage to warn people of the barriers. They are of an outdated design which is incompatible with the Equality Act 2010 as it makes use of the cycleway more difficult for disabled people. They are very difficult to navigate with cargo bikes and trailers. They require people passing through the barriers to resume cycling, up a very steep hill, from a complete standstill. These barriers create a pinch point at a very dangerous location which will further increase conflict between people walking and/or cycling on a path that is inadequate for the number of people using it. There is a risk of people falling onto the busway while trying to manoeuvre through the barrier. There is also a risk of congestion leading to people being stuck on Francis Crick Road (where many drivers continue to drive at excessive speed) waiting to get through.

Unsurprisingly, users of this route were quick to react to the barriers and photos and comments appeared on social media questioning who designed, approved and installed these dangerous barriers and calling for their removal. We now know that these barriers were installed by Countryside Properties at the request of the Cambridge Biomedical Campus, based on a few reports of incidents involving people cycling at this location. We have yet to establish who approved the installation of these barriers however we can confirm that no consultation was conducted with councillors, the public, employees of the Biomedical campus or Camcycle. Thus far there has been no inclination to accept the risks these barriers create nor to remove them. We are continuing to apply pressure and we need your help.

We’re calling on the Biomedical Campus and the County Council to immediately remove these dangerous barriers. We understand there are some risks with the current design and use of this junction, however, we believe these risks to be significantly less than those presented by this barrier. In the longer-term, we offer our time and expertise to help design a better solution for this junction. 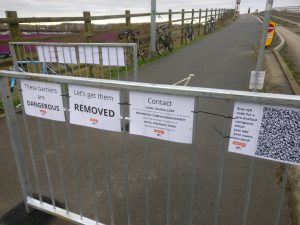 We put posters on the barriers to increase their visibility and encourage people to take action to get them removed. In less than 24 hours the County Council had removed them.

Local councillor Colin McGerty has recently set up a petition to get the CBC barriers removed.

You can also raise your concerns with:
The Biomedical Campus: enquiries@cambridge-biomedical.com
The County Council Highways team: highways@cambridgeshire.gov.uk

Your local councillors (find their details on writetothem.com)

A Camcycle member has also prepared a pre-drafted and pre-addressed email to help you.