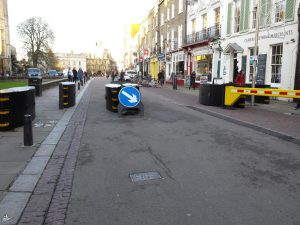 A street with one of the highest cycle flows in the country has been blocked with anti-terrorism barriers leaving cyclists travelling in both directions with only a single 1.2 metre-wide gap. We objected to this design and to the lack of consultation with the public and councillors, however, the installation has gone ahead.

On 9 January barriers and a gate were installed just north of the junction with Bene’t Street, with just one 1.2 metre-wide opening to be used by cyclists in both directions. The gate is being left open until the scheme is put into effect on January 13, and it will then be closed from 9.30am to 7pm. Security ‘barges’ have also been installed on the pavement further obstructing pedestrian space. 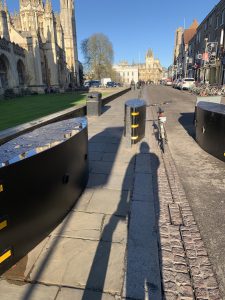 First appearances are, as we expected, that tourist groups are using the cycle gap, as the footway is not wide enough; at the moment cyclists can pass through the gateway, but there will be a lot of conflict from next Monday when the gate is closed in the day time. What’s more, the cycle gap is right against the kerb, with cobbles and a gutter on half its width.

There’s been some reorganisation of street furniture, with disabled car-parking spaces moved outside the barriers, replacing cycle parking which has been moved (hopefully in at least an equivalent quantity) inside – there are some oddities, such as disabled spaces on the east side of Trumpington Road, opposite St Catherine’s College, which will regularly bring traffic to a halt – but these can be changed without too much difficulty.

It seems all too obvious that all the barriers will do is to create exactly the kind of crowds that a terrorist would want to drive into – especially as the Corpus clock (the Chronophage), which already leads to large groups standing in the middle of the road, is outside the closed zone. And if one was dead-set on attacking right in that iconic location in front of King’s Chapel one would just have to wait until 7pm.

To add insult to injury, it seems that half the funding has come from the Greater Cambridge Partnership, whose mission is to encourage sustainable transport modes like cycling, not to obstruct them.

This is a temporary scheme that will be monitored for some months and the intention is to design a permanent arrangement, set into the ground, which should at least be less visually intrusive. It’s essential that there is proper consultation at this stage, and that at least two wider cycle gaps are provided.

If you would like to object to these barriers you can contact the Cambridge City Council on projectdevelopment@cambridge.gov.uk (tel. 01223 457000). We also suggest you contact your local councillor. You can find their details at writetothem.com

You can read our earlier objection to the barriers here: 2019oct_Kings_Parade