The Chisholm Trail is a new walking and cycling route which will connect up the city’s two rail stations and the north and south sections of the Busway cycleway. It will provide a direct, mostly off-road route across the city and a new link between East Chesterton and Abbey wards as well as improved access to green spaces such as Ditton Meadows and Coldham’s Common.

It’s a popular project and one that Camcycle is constantly asked about. A recent visitor to our stall at the Chesterton Festival said the Chisholm Trail would make her route to work simpler, easier and safer and would be a lovely new route for her morning dog-walk. She wanted it to be ready as soon as possible!

At Camcycle, we’re also excited about the prospect of finally seeing local people being able to walk and cycle along a route that we’ve been campaigning for over the last two decades. This week, we heard from the Greater Cambridge Partnership that work on Phase One of the trail is progressing well. The good news is that we’ve been told that the northern part of the trail (from Cambridge North to Coldham’s Lane) is expected to be completed in 2021, but the not-so-good news is that this will mean disruption to the current cycle route across Ditton Meadows over the next twelve months. 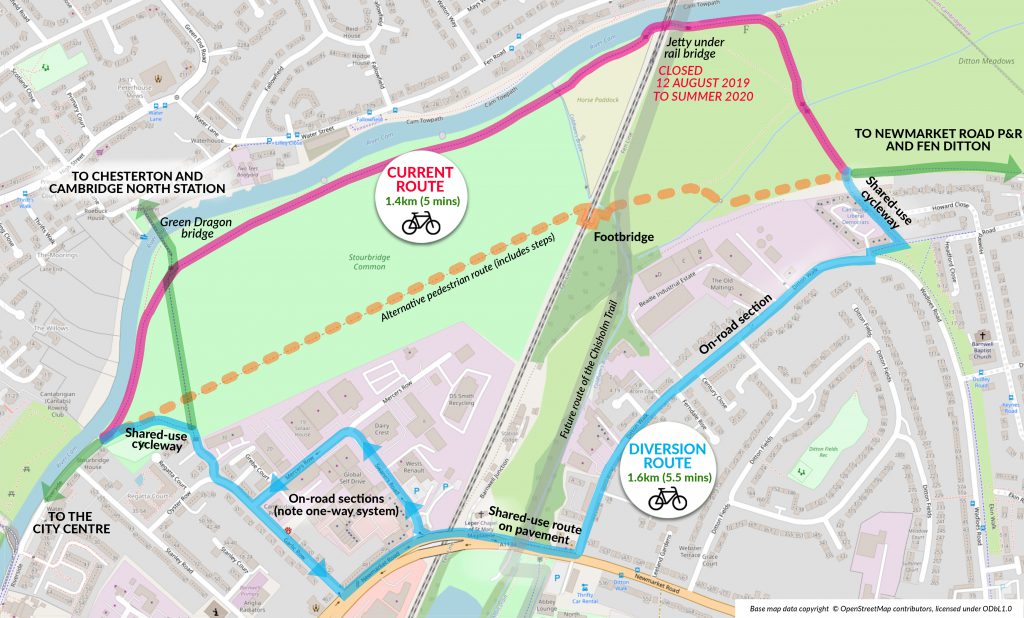 The wooden jetty under the rail bridge across the river which is part of National Cycle Network Route 51 will be closed from 10am on Monday 12 August 2019 to summer 2020 and the river itself will be fully closed during some periods as well, although efforts will be made to maintain access during peak rowing seasons.

Our suggested diversion route via Garlic Row, Newmarket Road and Ditton Walk will add 0.2km to the journey between the Riverside entrance to Stourbridge Common and the link to the Wadloes cycleway on Ditton Meadows taking users on a mixture of side streets and shared-use paths which are marked as part of the city’s on-road cycle network on the Cambridge Cycle Map.

Although diversions and disruption for cyclists and pedestrians are never welcome, in this case the long-term outcome for those who cycle and walk should be well worth the temporary inconvenience. It should be exciting to see rapid progress on the ground in the area and the eventual installation of the Abbey-Chesterton bridge which is currently being built in Sheffield. Camcycle will continue to keep our members and supporters updated with the latest news and information during the Chisholm Trail works and we look forward to celebrating the opening of Phase One of the Trail in the next couple of years.