Improving existing road layout can take time and campaigning effort, but new roads should be designed well from the start. Camcycle trustee Matthew Danish is frustrated that Highways England have added another dangerous roundabout crossing on a new junction of the A14. How has this happened in 2019? 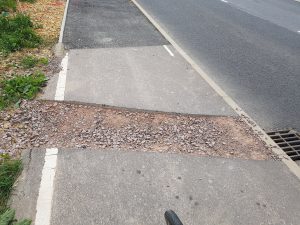 Over the weekend I went for a ride to Boxworth End to take a look at some damage that the A14 project team had wreaked on a pre-existing cycleway from Swavesey to the Buckingway Business Park. There were some fresh and dangerous trenches in the cycleway that would surely cause a crash if someone rode over them unsuspectingly.

We’ve been promised by the A14 team that these would be fixed soon, however while looking around I noticed a substantially worse problem that can’t be fixed so easily: the roundabout crossing.

It appears that they are in the midst of constructing a cycleway further northwest along the A14, which is reasonable enough. However, to reach this new cycleway will require navigating across the gaping arm of the roundabout while drivers shoot around you at 50mph. There is a tiny refuge island in the middle that provides some limited relief, but on either side are extremely wide carriageways with high speed car traffic. The carriageways are not yet marked however they both appear to be approximately 7m wide, which is enough for two lanes of traffic each. Making matters much worse, the crossing is almost immediately adjacent to the roundabout itself, which means that there is zero reaction time in case of a mistake, or if you are a little bit slow or hesitant. 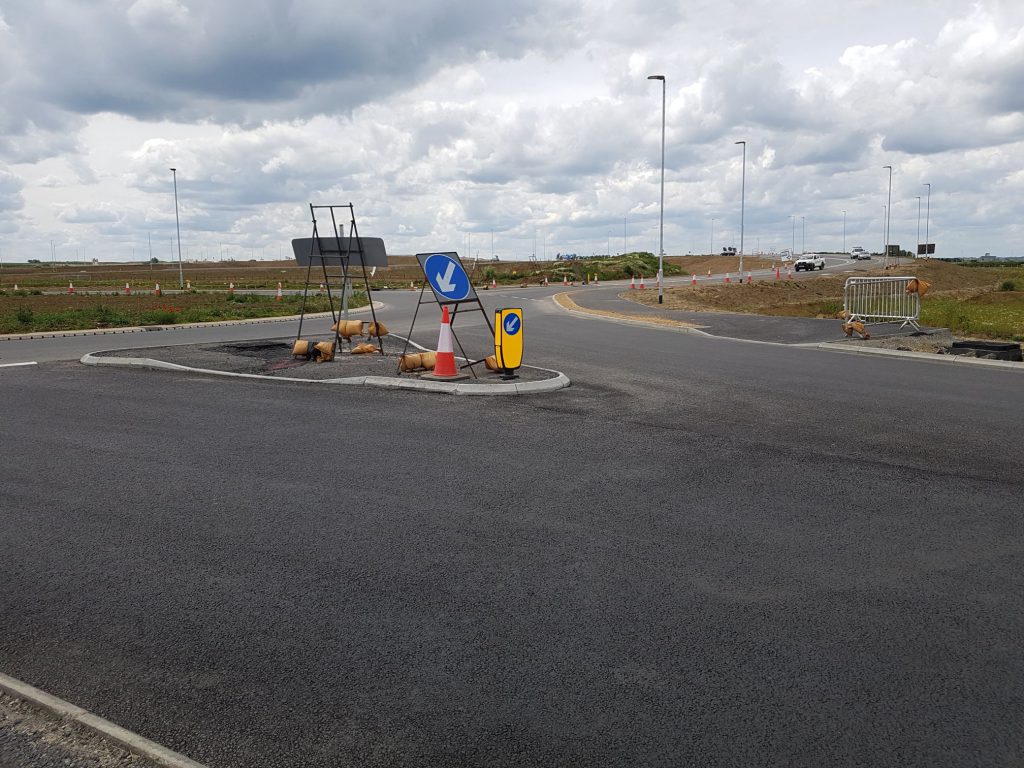 In fact, the only safe way to complete the crossing of the roundabout exit is to wait until the roundabout is completely empty with no approaching car traffic at all. Since roundabouts are designed to be continuously processing traffic, and this is at a junction with the A14, it is quite likely that you could be waiting a very long time for a truly safe crossing window.

Needless to say it is not in human nature to wait that long at the side of a road or, even worse, in the island refuge. Therefore one of two things will happen, both bad: (a) people will make a run for it if they think they see a gap while drivers try to zoom out of the exit at 50mph, or (b) people won’t use the crossing and therefore won’t use the cycleway being provided, thus wasting what would otherwise be a great resource.

It’s extremely frustrating to see such a crossing being built new in 2019 when the Greater Cambridge Partnership is currently spending money to replace very similar, dangerous crossings at the A603 / M11 junction 12 roundabouts in Barton. It’s bad enough as it is, then Highways England went ahead and made the list of dangerous crossings longer. If they had bothered to ask they would have learned that their design was dangerous and some very minor tweaks could have made it much safer without affecting traffic flow at all. The Dutch build plenty of high-capacity roads for cars but they always provide safe crossings for people walking and cycling. Here’s one example from outside Utrecht (imagery source: Google):

The Dutch advice for building this kind of driver-priority crossings in a safe way is really very simple, yet each one of these principles is broken by the Highways England design:

The point is to give people a reasonable chance of being able to find safe gaps in traffic that they can use to cross without taking their life in their hands, and so that mistakes don’t become deadly. This what the above example from outside Utrecht looks like from the ground:

Implementing this kind of design would have been trivial for Highways England. The verges do not have to be so wide; that is just a bonus feature of the Utrecht example. The cost is basically the same, especially in the context of a £1,800 million project (the A14 expansion). Yes, the splitter island would need to be lengthened, as recommended by their very own guidance, TD 16/07, but there’s plenty of space. It might take a few more square metres of land for a longer pathway, but this is in a place that is completely desolate apart from the roadway. It would be slightly more out of the way for cycling to the business park from the northwest, but a subtly redirected pathway further up would have made that difference imperceptible.

The prevention of serious injuries, however, would be priceless.