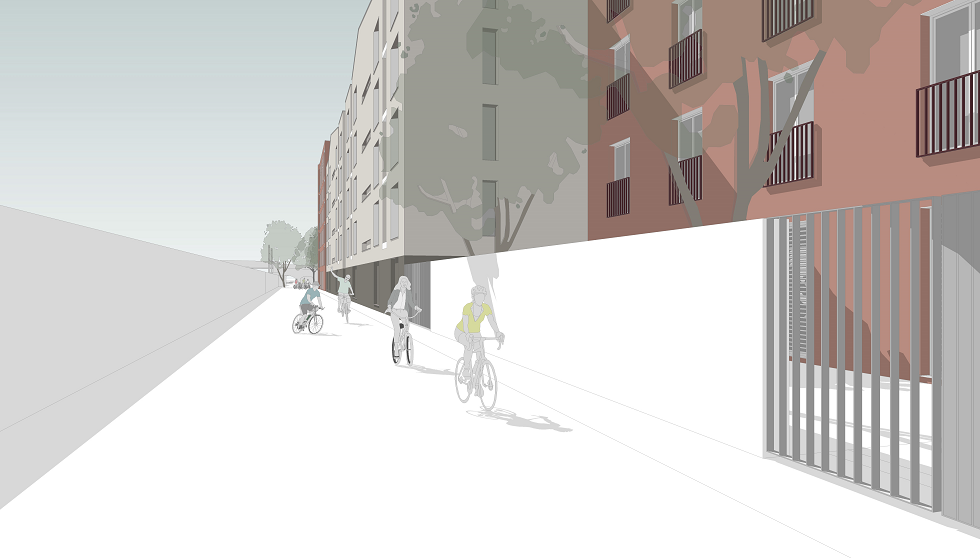 February 12th Update: We have submitted our letter of objection. Read it here: PDF

Indicative rendering of the Chisholm Trail between the blank walls of the Network Rail fence and the Mill Road Depot site. Actual design will have landscaped edges and a 4-5 metre-wide segregated path.

A change in the Mill Road Depot development, a brownfield site proposed to have over 150 homes, is threatening the safety of the future Chisholm Trail on the segment through Petersfield. The new design for the site turns its back on the Trail and has closed off all of the intermediate public accesses, save for one tiny footway. The only way to reach the Trail by cycle from the area north of Mill Road will be a sharp right turn from the corner of Hooper Street. This will leave the Trail from there caught between a security fence and a brick wall, a lonely place at night and one we fear will be avoided by people concerned about their personal security. The older plans had other problems but were much better in this regard, as they provided excellent permeability between the streets of the Depot site and the Trail.

Our most recent newsletter features an article about the overprovision of car parking in this development, however these recent changes came after the copy deadline. The Chisholm Trail is shown in the image to the right and the area of the Depot site is highlighted in light blue, right next to the Mill Road bridge. This section of the Chisholm Trail is still under design but it is part of the emerging Local Plan and the developers have agreed to make a six metre-wide space for it. However in order for the Trail to be useful it needs to be accessible, and in order for it to be safe it needs to attractive and permeable so that people do not feel trapped or worried about their personal security. For more details, see our diagrams below. This issue, combined with the excessive amounts of car parking for a development in such a sustainable location for active and public transport, show that the developers are failing to understand the needs of the local community. Instead they are sidelining the Chisholm Trail instead of integrating it into the development for the benefit of residents within and around the site.

Further complicating matters, the new Mill Road Depot development application 17/2245/FUL was announced online as having a comment deadline of February 14th. With that in mind we had been working on our response. However, we have just recently been informed of an administrative error: the true comment deadline was intended to be February 2nd. The case officer has agreed to continue taking comments but those who object now cannot participate in the scheduled Development Control Forum. We are concerned that the design problems we are highlighting could get lost in the noise and not be fixed.

There are several actions you can take to help:

Sample text you may adopt when writing to councillors or officers:

I am a supporter of the Chisholm Trail, a safe walking and cycling route that will connect both railway stations and many destinations in between. Recently there has been a change for the worse on the Mill Road Depot project, a site where the Trail runs near Mill Road bridge. While the Trail has a corridor on the eastern edge of the site, all of the intermediate access to it south of Hooper Street has been blocked off. There the Trail will be a sliver of land between security fencing for the railway and the back of buildings. Personal security fears will arise with such a corridor, especially after dark, and it will be impossible to police the space effectively. In contrast, the previous plans for the Depot site had multiple points of access to the Trail, making it easy for people to flow freely and keeping an open feeling to the route. I ask you to please support changes to the Depot site that bring back that permeability and make the Trail easier to access from the surrounding neighbourhood.

I am concerned about the excessive number of car parking spaces contained within the Mill Road Depot planning application. They propose 150 parking spaces, which could mean 150 more cars added to the already-intolerable Mill Road congestion and less room for affordable housing. Mill Road Depot is one of the most well-located sites in the entire county for using sustainable transport options such as walking, cycling and public transport, with the railway station down the street, numerous shops right around the corner, and a very strong local cycling culture. Excessive car parking spaces will increase costs of housing and harm quality-of-life for both new and current residents. Please ask the applicants to reduce the amount of car parking on the Mill Road Depot site. Site Plan (northern) showing only remaining cycle access to Chisholm Trail, and one of the closed-off accesses (now walled off and only usable by residents with a key) 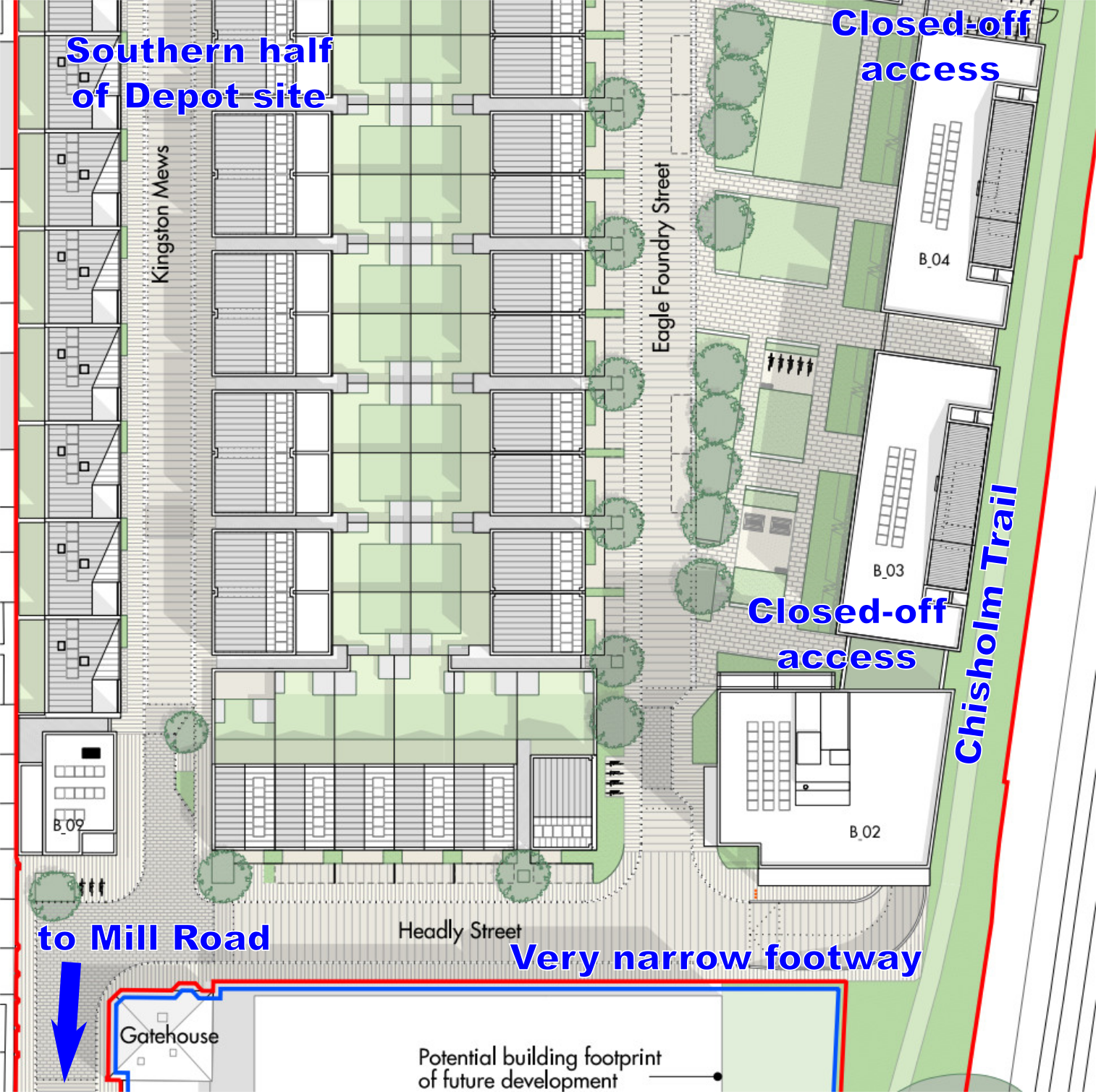 Site Plan (southern) showing two of the closed-off accesses and the remaining narrow footway squeezed between a car ramp and a building wall.